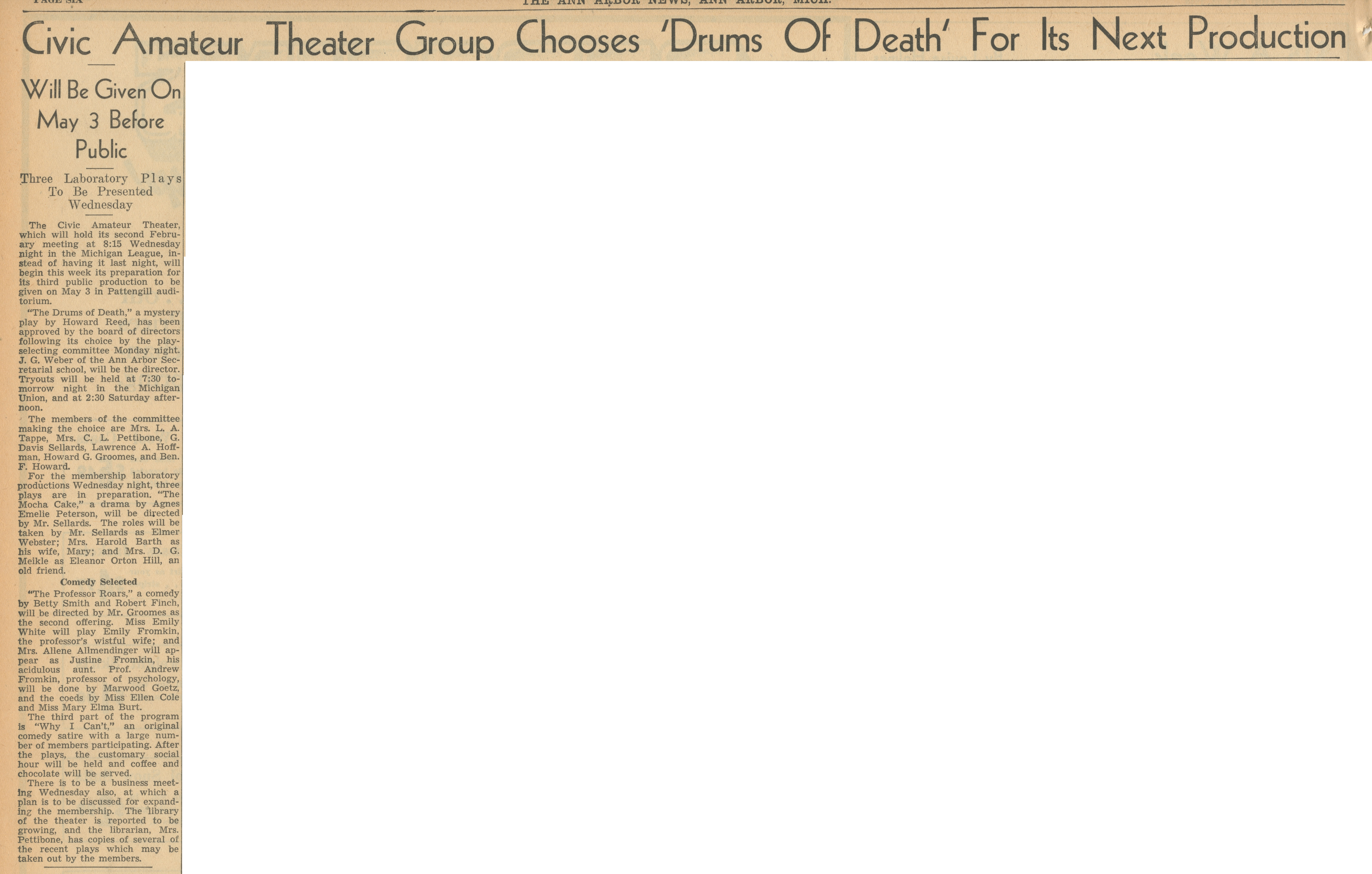 ﻿Civic Amateur Theater Group Chooses 'Drums Of Death' For Its Next Production ;

Will Be Given On May 3 Before Public

Tile Civic Amateur Theater, which will hold its second February meeting at 8:15 Wednesday night in the Michigan League, instead of having it last night, will begin this week its preparation for its third public production to be given on May 3 in Pattengill auditorium.

"The Drums of Death,” a mystery play by Howard Reed, has been approved by the board of directors following its choice by the play-selecting committee Monday night. J. G. Weber of the Ann Arbor Secretarial school, will be the director. Tryouts will be held at 7:30 tomorrow night in the Michigan Union, and at 2:30 Saturday afternoon.

For the membership laboratory productions Wednesday night, three plays are in preparation. “The Mocha Cake,” a drama by Agnes Emelie Peterson, will be directed by Mr. Sellards. The roles will be taken by Mr. Sellards as Elmer Webster; Mrs. Harold Barth as his wife, Mary; and Mrs. D. G. Meikle as Eleanor Orton Hill, an old friend.

“The Professor Roars,” a comedy by Betty Smith and Robert Finch, will be directed by Mr. Groomes as the second offering. Miss Emily White will play Emily Fromkin, the professor’s wistful wife; and Mrs. Allene Allmendinger will appear as Justine Fromkin, his acidulous aunt. Prof. Andrew Fromkin, professor of psychology, will be done by Marwood Goetz, and the coeds by Miss Ellen Cole and Miss Mary Elma Burt.

The third part of the program is “Why I Can’t,” an original comedy satire with a large number of members participating. After the plays, the customary social hour will be held and coffee and chocolate will be served.

There is to be a business meeting Wednesday also, at which a plan is to be discussed for expanding the membership. The library of the theater is reported to be growing, and the librarian, Mrs. Pettibone, has copies of several of the recent plays which may be taken out by the members.