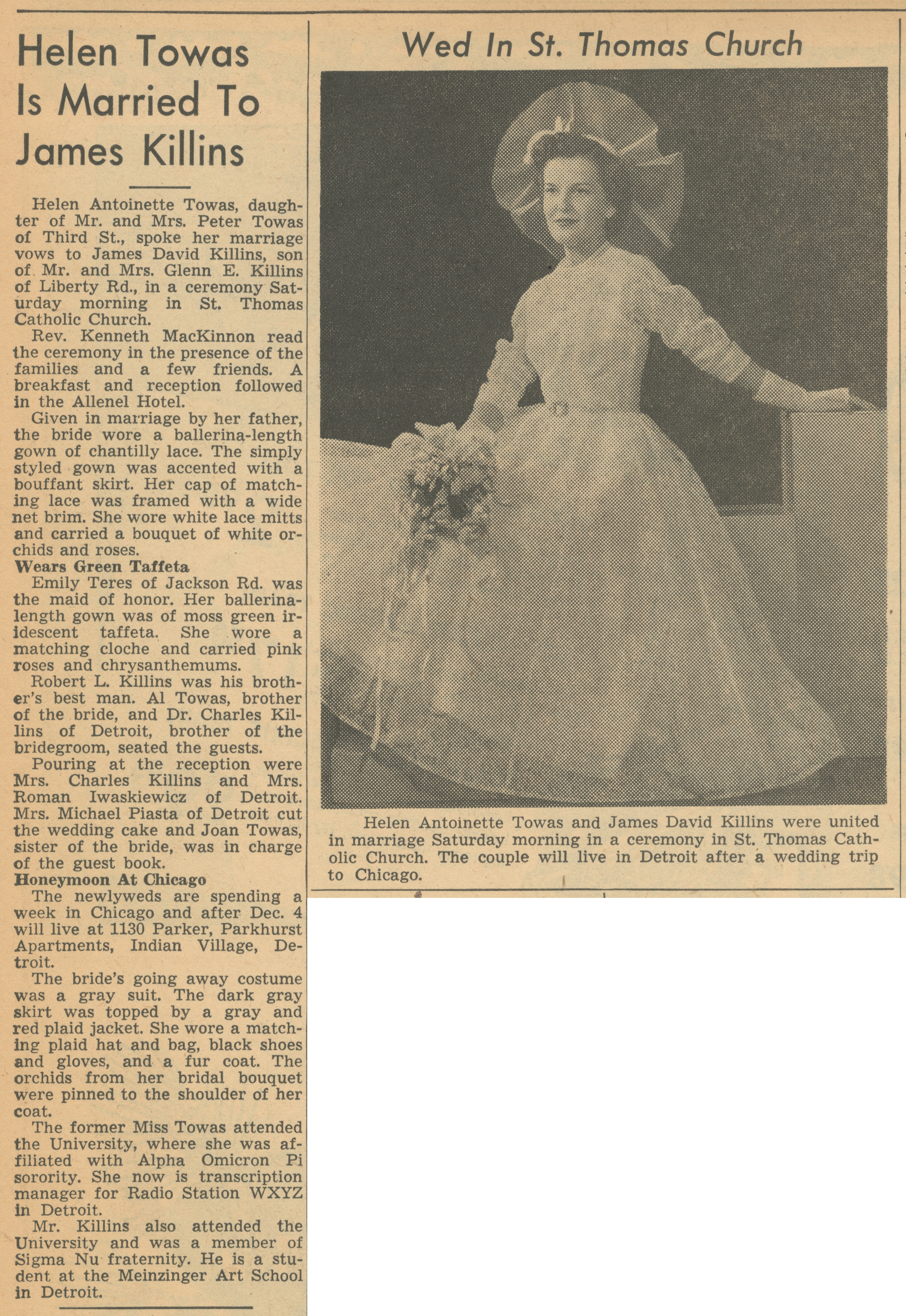 Rev. Kenneth MacKinnon read the ceremony in the presence of the families and a few friends. A breakfast and reception followed in the Allenel Hotel.

Given in marriage by her father, the bride wore a ballerina-length gown of Chantilly lace. The simply styled gown was accented with a bouffant skirt. Her cap of matching lace was framed with a wide net brim. She wore white lace mitts and carried a bouquet of white orchids and roses.

Emily Teres of Jackson Rd. was the maid of honor. Her ballerina-length gown was of moss green iridescent taffeta. She wore a matching cloche and carried pink roses and chrysanthemums.

Pouring at the reception were Mrs. Charles Killins and Mrs. Roman Iwaskiewicz of Detroit. Mrs. Michael Piasta of Detroit cut the wedding cake and Joan Towas, sister of the bride, was in charge of the guest book.

The newlyweds are spending a week in Chicago and after Dec. 4 will live at 1130 Parker, Parkhurst Apartments, Indian Village, Detroit.

The bride’s going away costume was a gray suit. The dark gray skirt was topped by a gray and red plaid jacket. She wore a matching plaid hat and bag, black shoes and gloves, and a fur coat. The orchids from her bridal bouquet were pinned to the shoulder of her coat.

The former Miss Towas attended the University, where she was affiliated with Alpha Omicron Pi sorority. She is now transcription manager for Radio Station WXYZ in Detroit.

Mr. Killins also attended the University and was a member of Sigma Nu fraternity. He is a student at the Meinzinger Art School in Detroit.

IMAGE TEXT: WED IN ST. THOMAS CHURCH: Helen Antoinette Towas and James David Killins were united in marriage Saturday morning in a ceremony in St. Thomas Catholic Church. The couple will live in Detroit after a wedding trip to Chicago.