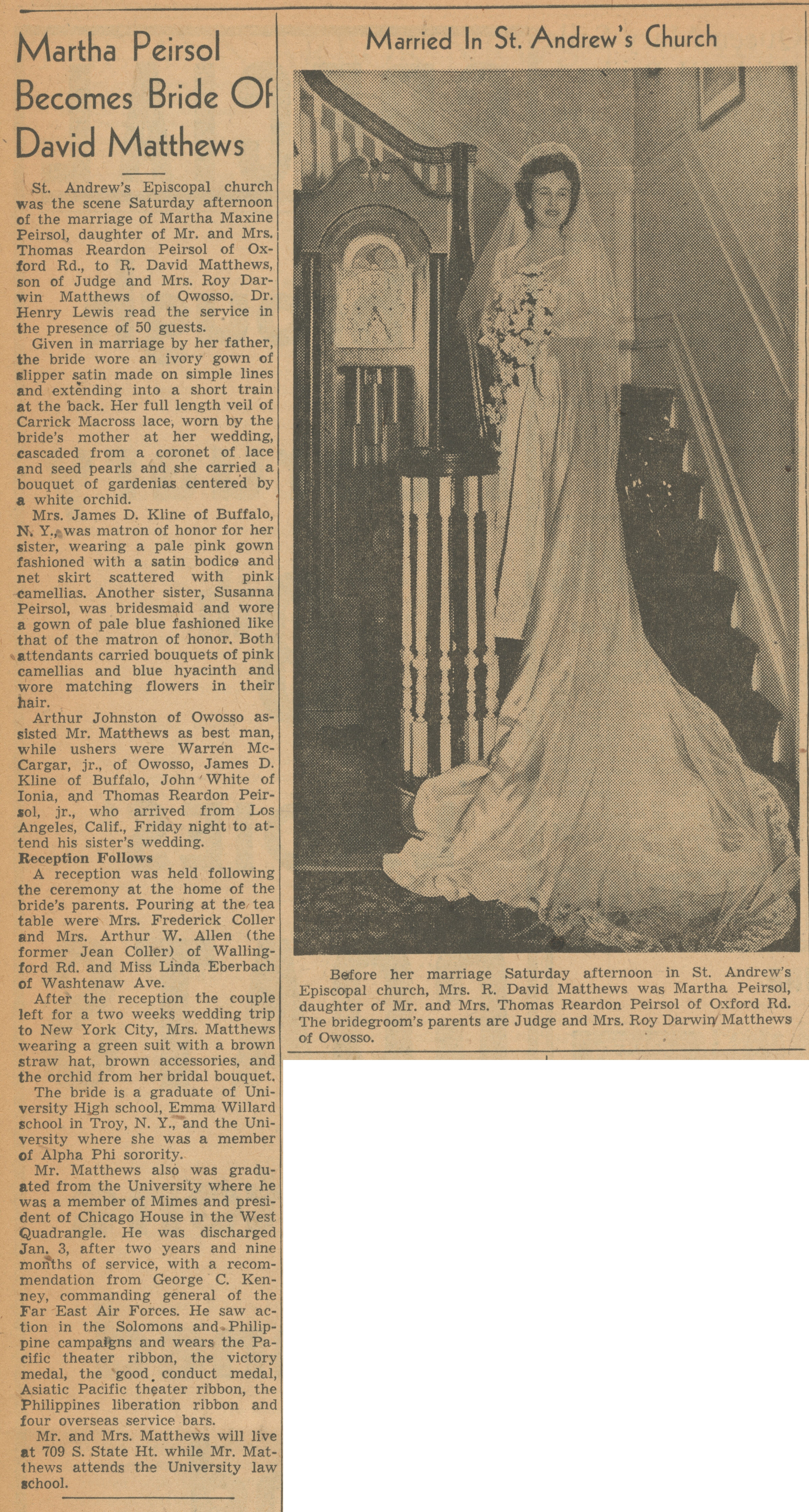 St. Andrew’s Episcopal church was the scene Saturday afternoon of the marriage of Martha Maxine Peirsol, daughter of Mr. and Mrs. Thomas Reardon Peirsol of Oxford Rd., to R. David Matthews, son of Judge and Mrs. Roy Darwin Matthews of Owosso. Dr. Henry Lewis read the service in the presence of 50 guests.
Given in marriage by her father, the bride wore an ivory gown of slipper satin made on simple lines and extending into a short train at the back. Her full length veil of Carrick Macross lace, worn by the bride’s mother at her wedding, cascaded from a coronet of lace and seed pearls and she carried a bouquet of gardenias centered by a white orchid.
Mrs. James D. Kline of Buffalo, N. Y., was matron of honor for her sister, wearing a pale pink gown fashioned with a satin bodice and net skirt scattered with pink camellias. Another sister, Susanna Peirsol, was bridesmaid and wore a gown of pale blue fashioned like that of the matron of honor. Both attendants carried bouquets of pink camellias and blue hyacinth and wore matching flowers in their hair.
Arthur Johnston of Owosso assisted Mr. Matthews as best man, while ushers were Warren McCargar, jr., of Owosso, James D. Kline of Buffalo, John White of Ionia, and Thomas Reardon Peirsol, jr., who arrived from Los Angeles, Calif., Friday night to attend his sister’s wedding.

Reception Follows
A reception was held following the ceremony at the home of the bride’s parents. Pouring at the tea table were Mrs. Frederick Coller and Mrs. Arthur W. Aleen (the former Jean Coller) of Wallingford Rd. and Miss Linda Eberbach of Washtenaw Ave.
After the reception the couple left for a two weeks wedding trip to New York City, Mrs. Matthews wearing a green suit with a brown straw hat, brown accessories, and the orchid from her bridal bouquet.
The bride is a graduate of University High school, Emma Willard school in Troy, N. Y., and the University where she was a member of Alpha Phi sorority.
Mr. Matthews also was graduated from the University where he was a member of Mimes and president of Chicago House in the West Quadrangle. He was discharged Jan. 3, after two years and nine months of service, with a recommendation from George C. Kenney, commanding general of the Far East Air Forces. He saw action in the Solomons and Philippine campaigns and wears the Pacific theater ribbon, the victory medal, the good conduct medal, Asiatic Pacific theater ribbon, the Philippines liberation ribbon and four overseas service bars.
Mr. and Mrs. Matthews will live at 709 S. State St. while Mr. Matthews attends the University law school.