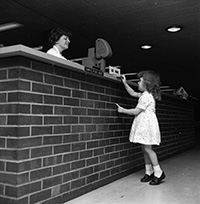 The first article, dated 1886, is an editorial written when the library was still part of the high school, then at the corner of State and Huron (site of today’s North Quad), and the first librarian, Nellie S. Loving, was just three years into her almost 40 year tenure. The headline reads “GOOD READING FREE: The Public Library of this City and the Good it is Doing.” Although there had been earlier lending libraries in Ann Arbor, this was the first free one. Starting in 1883, on Wednesdays from 4 to 5 p.m. the high school’s collection of 2,500 books was available to check out by anyone in the school district over fourteen years of age. The library remained connected with the public school system until 1995. When the high school library opened to the public, the main subscription library in town was the Ladies Library Association, who deeded their collection of 4,600 books to the public library in 1908.

After the 1886 article, the collection jumps to 1930 when the first article is fittingly about children reading, always a key mission. That summer young people could join the “Around the World Club” and after reading ten books about different countries and writing reports on them, were congratulated on having completed the “Library Cruise.” A picture shows the participants in front of the library, the façade of which is now preserved on the Huron Street side of North Hall. Summer reading programs continued for many years using themes such as Paul Bunyan, Space Ships, and Knights. Activities the rest of the year included story hours, talks on children’s books, children’s book week, reading clubs, and displays of children’s books. When the bookmobile was introduced in 1954, it was touted as a way that children could more easily get books. In the summer it stopped at all the supervised playgrounds. 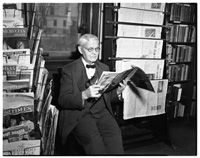 From the beginning, the library worked to be relevant to current conditions. The second article in the 1930s section, dated 1933 in the midst of the Great Depression, is headlined “Unemployed Make Wide Use of Public Library.” Otto Haisley, superintendent of schools, boasted what a community resource the library continued to be, giving the unemployed a chance to make good use of their unsought time for leisure.

After World War II, technology began creeping in. In 1947 the Lions Club raised money to buy devices that allowed bedridden people to read on the ceiling, available to check out of the library as long as a letter from a doctor was produced. In 1952 microfilm readers were introduced to save space. The collection started with seventeen magazines, which the New York Times and Ann Arbor News was soon to be added. Library director Homer Chance offered to show anyone how to use the readers. The next year a drop off box, looking very much like a mail box, was underwritten by the Kiwanis and the Friends of the Library. It could take books, but not phonographs, which by then had been added to their list of library offerings. A picture of Homer Chance demonstrating its use appeared in the paper as he stopped his car on a less than now trafficked Huron Street.

Ann Arbor High School moved to West Stadium when the buildings that housed the library and the high school were sold to the University of Michigan and renamed the Frieze Building. After much discussion, the public library decided to stay downtown. They hired Midland architect Alden Dow to design a building on a site they had purchased at the corner of Fifth Avenue and William Street. Dow demonstrated his motto, “gardens never begin and buildings never end” by placing a garden on the roof of the veranda that ran across the front of the building, as well as a second one at ground level in the front of the building. A 1961 picture shows forsythia blooming on top of the veranda. 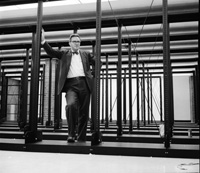 Ground breaking for the new building at 343 South Fifth Avenue took place in October 1956. Its progress was well documented in photos, starting with the basement being dug and ending with staff filling the shelves with books. The final cost was $170,000. Pictures of the interior show an open floor plan with lots of natural light, outfitted with modern furniture of the day. The card catalogue was prominently placed where it could be seen when people entered. There was enough room that students were encouraged to study there. Upstairs a listening room allowed patrons to enjoy music or spoken word records. At the dedication in 1957, Howard Peckham, director of the University of Michigan’s Clements Library, said the new library “added an extra room to each of our houses.” He continued that even with TV, movies, and automobiles “nothing replaces the printed book.”

Once settled into the new building the library began adding services such as delivery of books to seniors in 1968 and a circulating art print collection in 1969. In 1986 a compact disc collection was added to the items that could be checked out, followed with video tapes the next year. In 1969 they inaugurated a Black Studies collection. 1974 they published a list of non-sexist children’s books.

The Friends of the Library, organized to help the new library, began holding book fairs every May. The first one, held in 1954 on the grounds where the new library was to be built, was to raise money to buy a bookmobile. After the library was finished, they held the sales on the long front porch, a perfect place protected by the roof of the veranda. The News helped them with publicity by running pictures each year of the ladies, all described by a Mrs. in front of their husband’s names, sorting boxes and boxes of donated books. At the 1962 sale the women dressed in nineteenth-century garb to emphasize that the proceeds were to be used to publish Lela Duff’s Ann Arbor Yesterdays, based on a series of newspaper articles on historic subjects that she wrote. 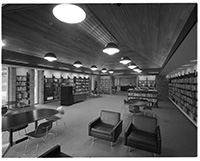 In 1965 the first branch library opened, named after first librarian Nellie S. Loving. Located on the east side of town at 3042 Creek Drive, just off Packard, it served residents of the neighborhood that had until 1957 been the separate village of East Ann Arbor. Local architect David Osler designed a modern building with floor to ceiling windows and sky lights. Coupled with modern furniture it was very welcoming. In 1966 Osler received an award for the building from the Michigan Society of Architects.

In 1974 the downtown library celebrated the completion of a 20,000 square foot addition that extended straight east behind the original building. Designed by Donald Van Curler, its purpose was to create more seating and shelving space. Wells of windows that created sunny places for patrons to sit and an enclosed garden on the south side fit well with Dow’s original conception.

The second branch library was completed in 1977, this one on the west side of town in the Maple Village Shopping center. A few years later, in 1983, it moved across Jackson Road to the Westgate Shopping Center. A third branch opened in 1981 in the Plymouth Mall Shopping Center and was expanded 1985.

A second addition was opened in 1991 at the downtown library. Osler Milling added two floors to the Van Curler addition, renovated the older part, and updated mechanical systems to handle increased use of technology. The first computer room was established with three PCs available for patrons to use.

The library was named “Library of the Year” of 1997 by the Library Journal, a national publication. They were becoming more computerized and making plans for new branches when, in 2000, an independent audit showed not only a deficit that the board had not known about, but also that money being embezzled by the finance director. He was arrested and found guilty, but it still left the library with the problem of funding. The board cut expenses, tabled plans for new branches, and raised the millage.

The next year, then-director Mary Anne Hodel left for a new job and the head children’s librarian, Josie Parker, was named interim director. In 2002 she was asked to stay on as permanent director. She started the job with the debt paid off and staff support evinced by the fact that about a dozen attended the board meeting, clapping when she was formally hired.

In 2004 the Malletts Creek Branch opened to replace the Nellie Loving library, which after almost fifty years of use was too small and out of date. Designed by Carl Luckenbach, Mallets Creek was done with attention to latest green strategies and with new technologies including the first self-checkout machines. In 2006 Pittsfield opened to better serve people in the south side of the district library area. Again designed by Luckenbach, it too paid attention to energy efficiently. Parker suggested it could be used for community space and that children could come and run around, a complete turnaround from traditional library philosophy. Traverwood, replacing the Northeast branch, opened in 2008. Architects Van Tine/Guthrie of Northville took the green strategy a step further by using local trees that had been devastated by the Emerald ash borer.

The archive ends in 2009 after Parker negotiated a deal with the Ann Arbor News to obtain their archives after they had stopped publishing a daily print edition.