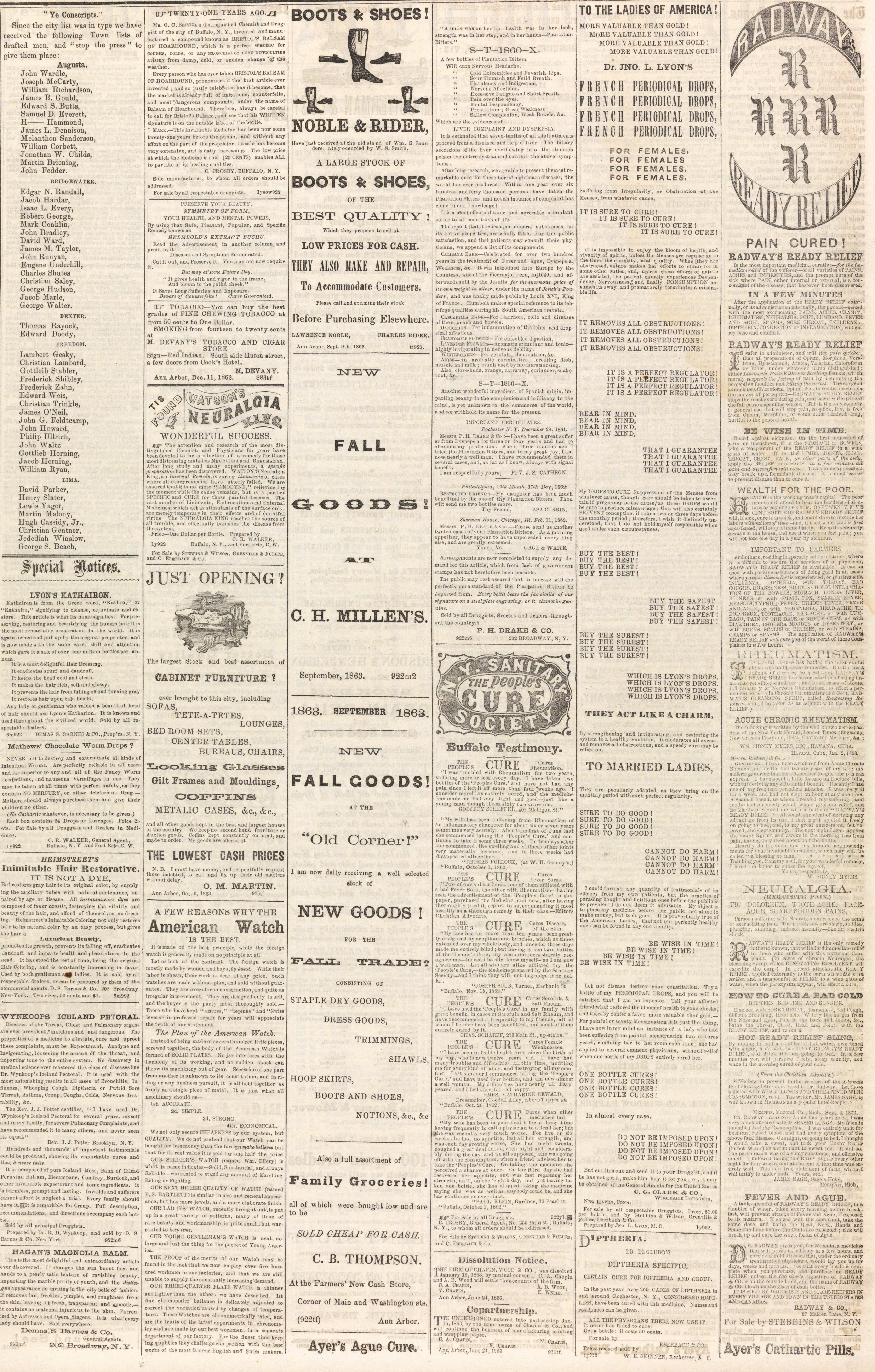 “Ye Conseripts." Since the city list was in type we have received the following Town lists of drafted men, and “stop the press " to give them place:
Augusta, John Wardle, Joseph McCarty, William Richardson, James B. Gould, Edward S. Butts, Samuel D. Everett, H- Hammond, James L. Dennison, Melanthon Sanderson, William Corbett, Jonathan W. Childs, Martin Briening, John Fedder.
BRIDGEWATER, Edgar N. Randall, Jacob Hardar, Isaac L. Every, Robert George, Mark Conklin, John Bradley, David Ward, James M. Taylor, John Runyan, Eugene Underhill, Charles Shutes Christian Saley, George Hudson, Jacob Marle, George Walter.
DEXTER. Thomas Rayock, Edward Doody,
FREEDOM.
Lambert Gesky, Christian Lambord, Gottleib Stabler, Frederick Shibley, Frederick Zahn, Edward Weis, Christian Trinkle, James O'Neil, John G. Feldtcamp, John Howard, Philip Ullrich, John Waltz Gottlieb Horning, Jacob Horning, William Ryan,
LIMA.
David Parker, Henry Slater, Lewis Yager, Martin Malony, Hugh Cassidy, Jr., Christian Gentner, Jedediah Winslow, George S. Beach,
Special Notices.
LYON'S KATHAIRON. Kathairon is from the Greek word, "Kathro," or “Kathairo," signifying to cleanse, rejuvenate and restore. This article is what its name signifies. For preserving, restoring and beautifying the human hair it is the most remarkable preparation in the world. It is again owned and put up by the original proprietor, and is now made with the same care, skill and attention which gave it a sale of over one million bottles per annum
It is a most delightful Hair Dressing. It eračicates scurf and dandruff.
It keeps the head cool and clean. To It makes the hair rich, soft and glossy.
It prevents the hair from falling off and turning gray
It restores hair upon bald heads, Any lady or gentleman who values a beautiful head of hair should use Lyon's Katharion. It is known and used throughout the civilized world, Sold by all respectable dealers.
6m922 DEMAS S. BARNES & CO., Prop'rs, N. Y. Mathews' Chocolate Worm Drops ?
NEVER fail to destroy and exterminate all kinds of Intestinal Worms. Are perfectly reliable in all cases and far superior to any and all of the Fancy Worm Confections, nd nauseous Vermifuges in use. They may be taken at all times with perfect safety, as they contain NO MERCURY, or other deleterious Drug.Mothers should always purchase them and give their children no other.
(No Cathartic whatever, is necessary to be given.) Each box contains 24 Drops or Lozenges. Price 25 cts. For Sale by all Druggists and Dealers in Medicine!.
C. R. WALKER, General Agent. Buffalo, N. Y and Fort Erie, €. W.
HEIMSTREET'S Inimitable Hair Restorative.
IT IS NOT A DYE, But restores gray hair to its original color, by supplying the capillary tubes with natural sustenance, impaired by age or disease. All instantaneous dyes are composed of lunar caustic, destroying the vitality and beauty of the hair, and afford of themselves no dressing, Heimstreet's Inimitable Coloring pot only restores hair to its natural color by an easy process, but gives the hair a
Luxuriant Beauty, promotes its growth, prevents its falling off, eradicates dandruff, and imparts health and pleasantness to the nead. It has stood the test of time, being the original Hair Coloring, and is constantly increasing in favor. Used by both gentleman a ladies. It is sold by all respectable dealers, or can be procured by them of the commercial agents, D.S. Barnes & Co. 202 Broadway New-York. Two sizes, 50 cents and $1. 6m922
WYNKOOPS ICELAND PETORAL.
Diseases of the Throat, Chest and Pulmonary organs are ever prevalent,"insidious and and dangerous. The properties of a medicine to alleviate, cure and uproot these complaints, must be Expectorant, Anodyne and Invigorating, loosening the mucus of the throat, and imparting tone to the entire system. No discovery in wedical science ever mastered this class of diseases like Dr. Wynkoop's Iceland Pectoral. It is used with the most astonishing results in all cases of Bronchitis, In fluenza, Whooping Cough Diptheria or Putrid Sore Throat, Asthma, Croup, Coughs, Colds, Nervous Irra tability, &c.
The Rev. J.J. Potter certifies, "I have used Dr. Wynkoop's Iceland Pectoral for several years, myself and in my family, for severe Pulmonary Complaints, and have recommended it to many others, and never seen its equal."
Rev. J.J. Potter Brooklyn, N.Y. Hundreds and thousands of important testimonials could be produced, showing its remarkable cures and that it never fails
It is composed of pure Iceland Moss, Balm of Gilead Peruvian Balsam, Elecampane, Comfrey, Burdock, and other invaluable expectorant and tonic ingredients. It is harmless, prompt and lasting. Invalids and sufferers cannot afford to neglect a trial. Every family should have it. It is remarkable for Croup. Full description, recommendations, and directions accompany each bot. tie. Sold by all principal Druggists.
Prepared by Dr. R. D. Wynkoop, and sold by D. S. Barnes & Co. New York.
922m 6
HAGAN'S MAGNOLIA BALM. This is the most delightful and extraordinary article ever discovered. It changes the sun burnt face and hands to a pearly satin texture of ravishing beauty, imparting the marble purity of youth, and the distinguish appearance so inviting in the city belle of fashion. It removes tan, freckles, pimples, and roughness from the skin, leaving it fresh, transparent and smooth.it contains no material injurious to the skin. Patron ized by Actresses and Opera Singers. It is what every lady should have. Sold everywhere. Demas,'S. Barnes & Co.
General Agents. 202 Broadway, NY,92206