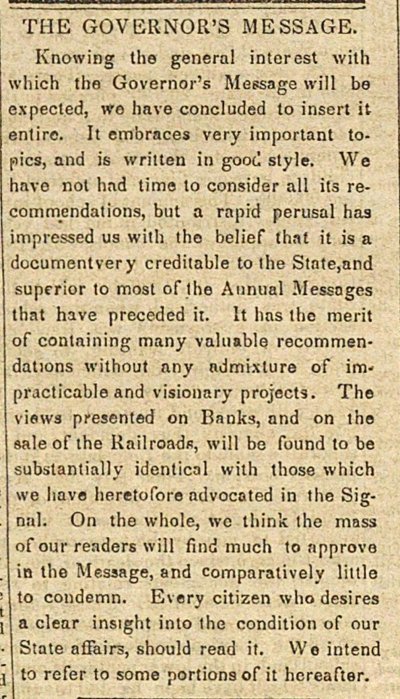 Knowing the general interest with which the Governor's Message will be expected, we have concluded to insert it enlire. It embraces very important topics, and is written in gooc style. We havo not had time to consider all its recomrnendations, but a rapid perusal has impressed us with the belief that it is a documentver y creditable to ihe Stnte,and superior to most of the Aunual Messoges that have preceded it. It hns the merit of containing many valuable recommendations without any ndmixture of impracticable and visionary projects. The views presented on Banks, and on the ale of the Railroads, will be found to be ubslantially identical with those which ve have heretofore advocated in the Signal. On the whole, wc think the mass of our readers will fmd much to npprove in the Message, and comparatively little to condemn. Every citizen whodesires a clear insight into the condition of our State afFairs, should read it. VVe intend to refer to some portions of it hcreafter.