Slave Trade At The South 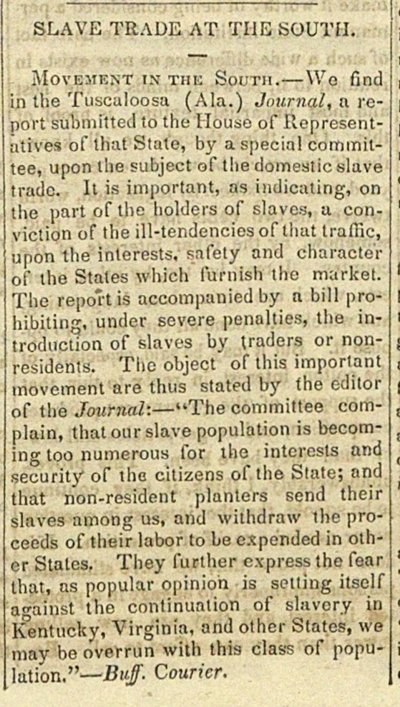 MOVEMENT IN TUK SoUTH. We find in the Tuscaloosa (Ala.) Journal, a. report submitted to the House of Representatives of that State, by a special commiltee, upon the subject of the domeatic slave tradc. It is important, as indicating, on the part of the holders of slavcs, u conviction of the ill-tendencies of that traiTic, upon the interests, snfety and character of the States which lurnish the market. The report is accompanied by n bill prohibiting, under scvere penalties, the introduction of slaves by iraders or nonresidenls. The object of this important tnovement are thus stated by the editor of the Journal: - "The committee complain, that otir slave population is becoming too numerous for the interests and security of the citizens of the State; and that non-resident planters send their slaves among us, and withdraw the proceeds of their labor to be expended in other States. They further express the fear that, ns popular opiniÃ³n is setting itself against the continualion of slavcry in Kentucky, Virginia, and other States, we nmy be overrun with this class of