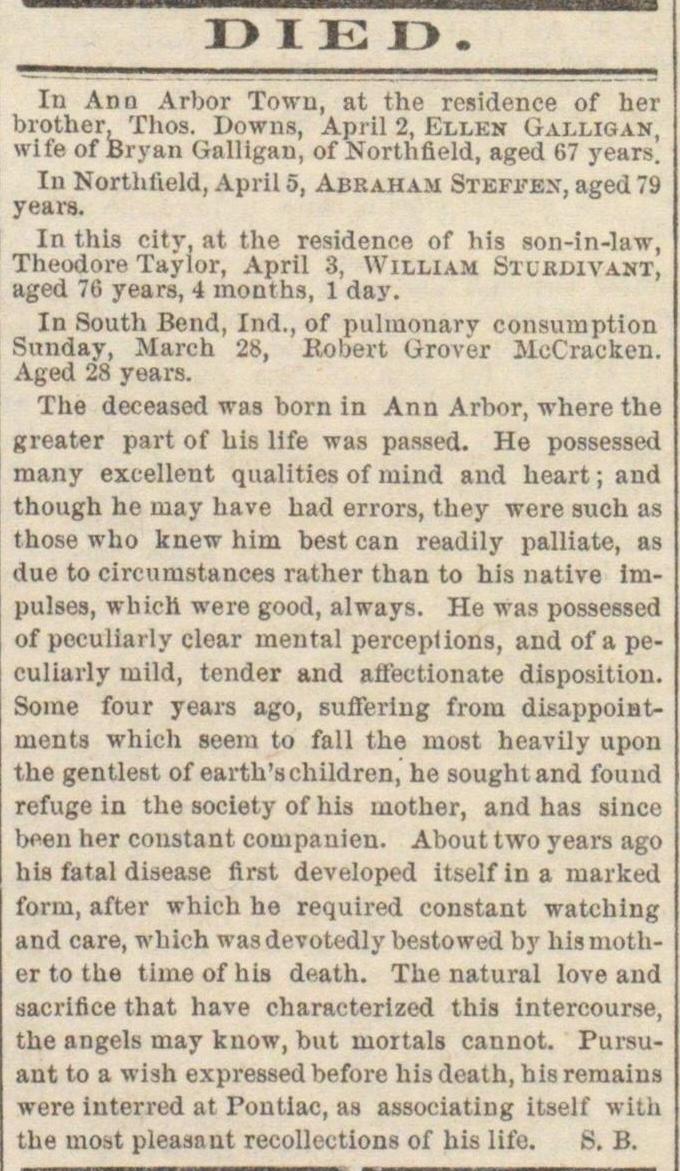 In Ann Arbor Town, at the residence of her brother Thos. Downs, April 2, Ellen Galligan, wife of Bryan Galligan, of Northfield, aged 67 years. In Northfield, April 5, Abraham Steffen, aged 79 years. In this city, at the residence of his son-in-law, Theodore Taylor, April 3, William Sturdivant, aged 76 years, 4 months, 1 day. In South Bend, Ini., of pulmonary consumption miday, March 28, Robert Grover McCracken. ged 28 years. The deceased was born in Ann Arbor, where the reater part of his life was passed. He possessed many excellent qualities of mind and heart ; and hough he may have had errors, they were such as hose who knew him best can readily palliate, as ue to circumstances rather than to his native immlses, which were good, always. He was possessed f poculiarly clear mental perceplions, and of a peuliarly mild, tender and attectionate disposition. Some four years ago, suffering from disappoiatuients which seem to fall the most heavily upon [ie gentlest of earth'schildren, he sought and fouud efuge in the society of his inother, and has since wen her constant compauieu. About two years ago lis fatal disease flrst developed itselfina inarked form, after which he required constant watching and care, wliich wasdevotedly bestowed by hisniother to the time of his death. The natural love and sacrifice that have characterized this intercourse, the angels may know, but moríais cannot. Pursuant to a wish expressed before his death, his remains were interred at Pontiac, as associating itself with he most pleasnut recollections of bis lift.