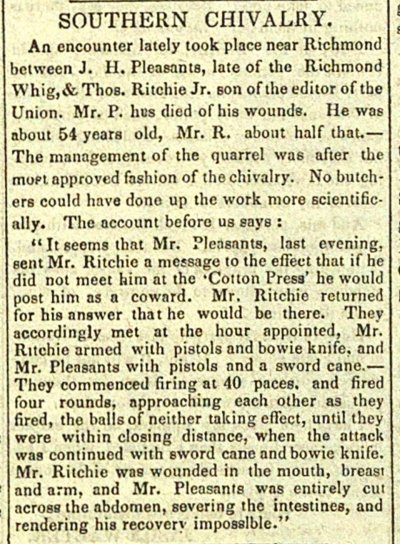 An cncounter Iately took place ncar luchmond bctween J. II. Pleasants, late of the Richmond Whig,&Tho8. Ritchie Jr. son of the editor of the Union. Mr. P. hus (lied of his wounde. He was nbout 54 year8 oÃ­d, Mr. R. about half that. - The management of the quarrel wa6 after the mopt npprovcd fashion of the chivalry. No butchers could have dono up the work more scientificaÃ¼y. The account before us says : " It seems that Mr. Plensnnts, last evcning, sent Mr. Ritchie a message to the effect that if he did not meet him at the 'Cotton Press' he would post him as n coward. Mr. Ritchie returned for his nnswer that he would bc there. They accordingly met at the hour appointed, Mr. Ritchie armcd with pistols and bowie knife, and Mr. Pleasants with pistols and a sword cane. - They commenced firing at 40 paces, and fired four roundti. approaching each other as they fired, the halls of neither taking effect, until they were within closing distance, when tho attnek was continued with sword cane and bowie knife. Mr. Ritchie was wounded in the mouth, breasi and arm, and Mr. Pleasant8 wns entirely cut across the abdomen, severing the intestincs, and rendering his recovery mposslble."