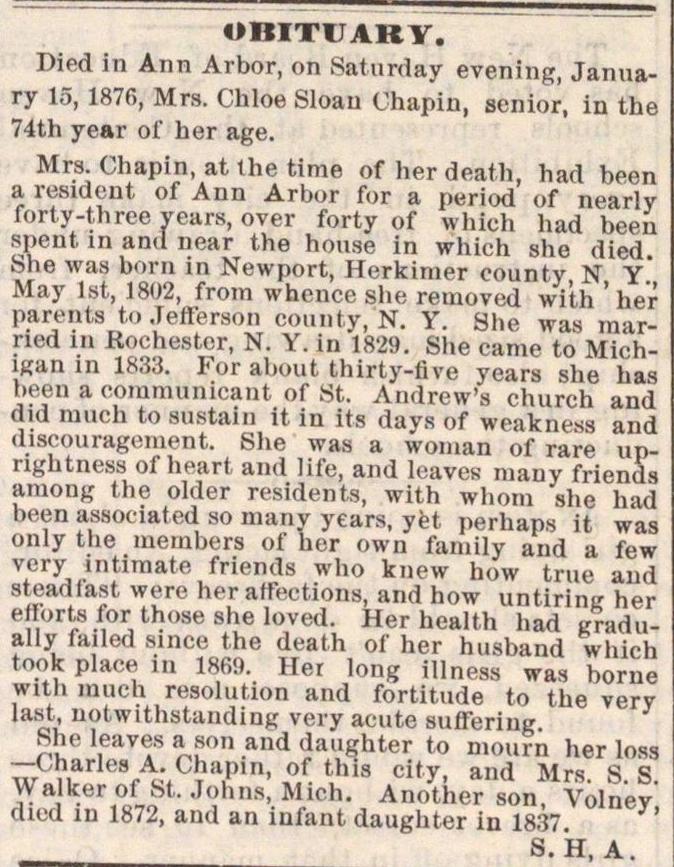 Died in Ann Arbor, on Saturday evening, January 15, 1876, Mrs. Chloe Sloan Chapin, senior, in the 74th ycar of her age. Mrs. Chapin, at the time of her death, had been a resident of Ann Arbor for a period of nearly forty-three years, over forty of which had been spent in and near the house in which she died tahe was boni in Newport, Herkimer county N Y May lst, 1802, from whence she removed with ' her parents to Jefferson county, N. Y. She was married in Rochester, N. Y. in 1829. She carne to Michigan in 1833. For about thirty-flve years she has been a coinmunicant of St. Andrew's church and did ruuch to sustain it in its days of weakness and diseouragement. Slie was a woman of rare upnghtness of heart and life, and leaves many friends among the older residents, with whom she had been associated so many years, yët ]erhaps it was only the members of her own faniily and a few very intímate friends who knew how true and steadlast were her atfections, and how untiring her efforts for those she loved. Her health had gradually failed since the death of her husband which took place in 1869. Her long illness was horn" witli much resolution and fortitude to the verv last, notwithstandint; very acute suffering She leaves a son and daughter to mourn her loss -Charles A. Chapín, of this city, and Mrs. S. S Walker of St. Johns, Mich. Another son, Volney dicd in 1872, and an infant daughter in 1837 . , , S. H, A .