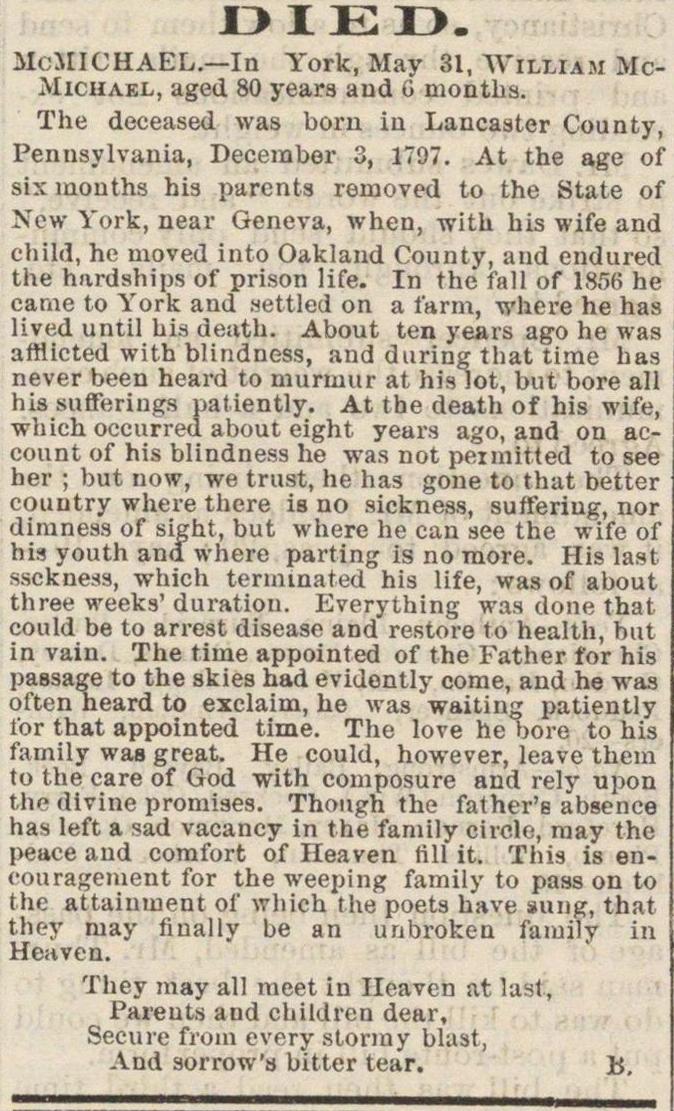 MclIICHAEL.- In York, May 31, Williaji McMichael, aged 80 years aud 0 montbs. The deceased was boru in Lancaster County, Penusylvania, December 3, 1797. At the age of six mouths his parcnts removed to the State of New Vork, near Geneva, when, with his wife and child, he moved into Oakland County, aud endured the hardships of prison life. In the fall of IS56 he carne to York and settled on a farm, where he has lived until bis deuth. About ten years ago he was amicted with blindness, and during that time bas never been heard to muruiur at his lot, but bore all his sufferings patiently. At the death of his wife, which occurred about eight years ago, and on account of his blindness he was not peimitted to see her ; but now, we trust, he has gone to that better country where there is no sickness, suffering, nor dimness of sight, but where he can see the wife of hij youth and where parting is no more. His last ssckneas, which terinmated his life, was of about three weeks' duration. Everything was done that could be to arrest disease and restore to health, but in vaiu. The time appointed of the Father for his passage to the skies had evidontly come, and he was often heard to exclaim, he was waiting patiently for that appointed time. The love he tjore to his family was great. He could, however, lcave them to the care of God with composure and rely upon the divine promises. Though the father's absence has left a sad vacancy in the family civele, may the peace and comfort of Heaven HU it. This is encouragement for the weeping family to pass on to the attaiument of wliich the poets have aung, that they may fiually be an unbroken faiuily in Heaven. They may all meet in Heaven at lusi. Párente aud chüdrcn dear. Secure froin every storm y blaat, And sorrow's bitter tear. B.