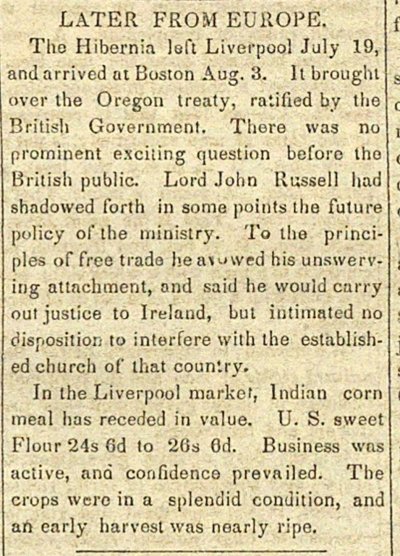 The HiberÃ±iÃ¡ left Liverpool July 19, and arrived at Boston Aug. 3. It brought over the Oregon treaty, ratified by the British Government. There was no prominent exciiing question before tho British public. Lord John Russell liad shadowed forth in some poirtts the future policy of the ministry. To tho principies of free trado heaunved his unswerving attnchment, and said he would curry outjustice to Ireland, but intimated no disj-iositioi; to interfere with the established church of that country. In the Liverpool marker, lndian corn ineal has receded in value. U. S. sweet Flour 24s 6d to 26s Gd. Business wns active, and confidence prevailed. The crops were in a splendid condition, and an carly harvost was nearly ripe.