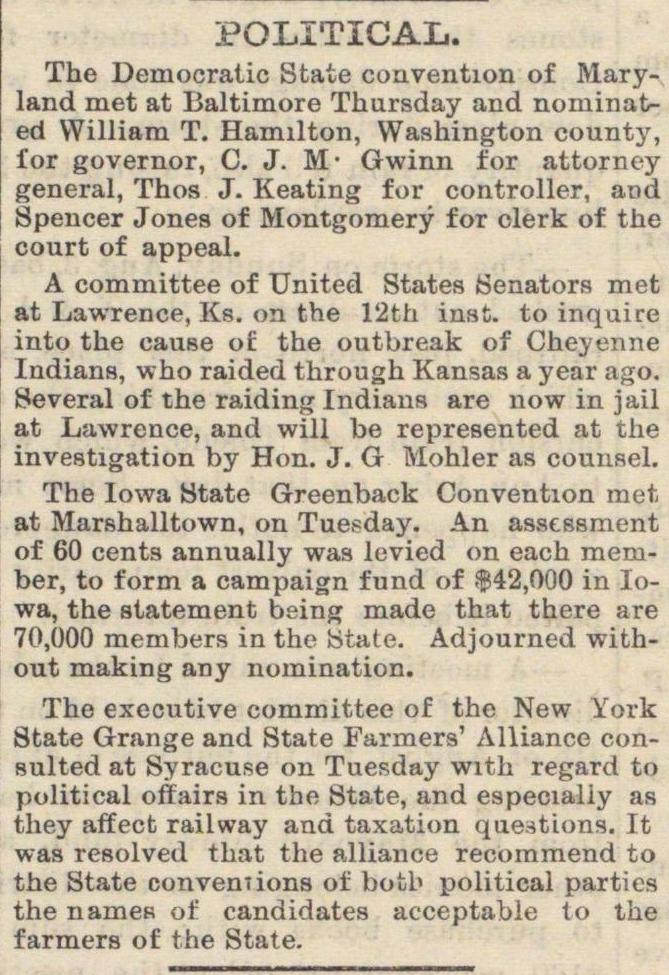 The Democratie State cotivention of Mary,and met at Baltimore Thursday and nominated William T. Hamilton, Washington county Cor governor, C. J. M Gwinn for attorney general, Thos J. Keating for controller, aac ípencer Jones of Montgomery for clerk of the court of appeal. A committee of United States Senators met at Lawrence, Ks. on the 12th inst. to inquice nto the cause of the outbreak of Cheyenne tndians, who raided through Kansas a year ago Several of the raiding Indians are now in jail at Lawrence, and will be represented at the mvestigation by Hon. J. G Mohler as counsel The lowa State Greenback Convention mei at Marshalltown, on Tuesday. An assessmeni of 60 cents annually was levied on each member, to form a campaign fund of $42,000 in lowa, the statement being made that there are 70,000 members in the látate. Adjourned without making any nomination. The executive committee of the New York State Grange and State Farmers' Alliance consulted at Syracuse on Tuesday with regard t nolitical offairs in the State, and especialiy as ;hey affect railway and taxation queations. It was resolved that the alliance recommend to ihe State convenTions of botl political parties ,he names of candidates acceptable to the farmers of the State.