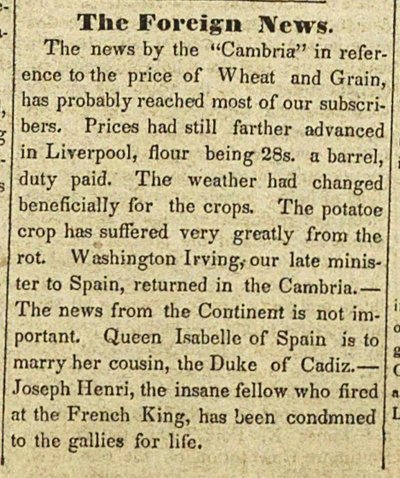 The news by the "Cambria" in refer ence tothe price of Wheat and Grain has probably reached most of our subscribers. Prices had still farther advanced in Liverpool, flour being 28s. a barrel, duty paid. Tiie weather had changed beneficially for the crops. The potatoe erop has sufTered very grcatly from the rot Washington Irving,-our late minister to Spain, returned in the Cambria. The news from the Continent is not important. Queen Isabelle of Spain Ã­s to marry her cousin, the Duke of Cadiz. - Joseph Henri, the insane fellow who fircd at the French King, has been condmned to the gallies for life.