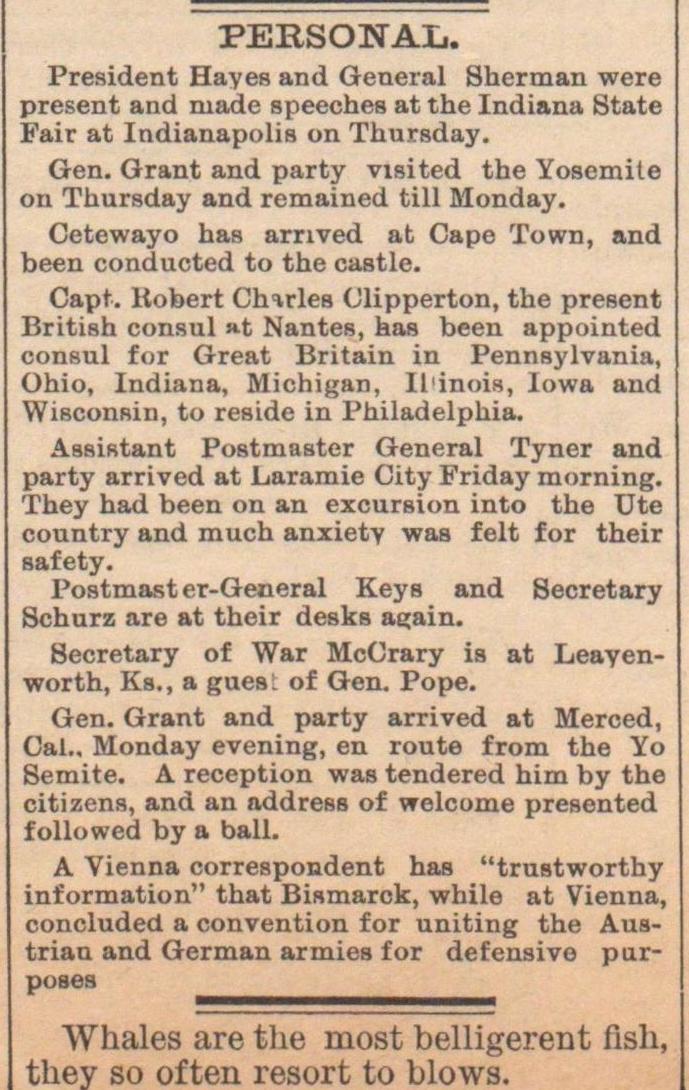 President Haves and General S herman were present and made speeches at the Indiana State fair at Indianapolis on Thursday. Gen. Grant and party visited the Yosemüe on Thursday and remained tïll Monday. Cetewayo haB arnved at Cape Town, and been conducted to the castle. Capt. Kobert Chirles Clipperton, the present British consul -t Nantes, has been appointed consul for Great Britain in Pennsylvania, Ohio, Indiana, Michigan, Il'inois, lowa and Wisconsin, to reside in Philadelphia. Aasifttant Postmaater General Tyner and party arrived at Laramie City Friday morning. Tfaey had been ou an excursión into the Ute country and much anxietv was feit for their safety. Postmast er-General Keys and Secretary Schurz are at their desks atjain. Secretary of War McCrary is at Leayenworth, Ks., a guesi. of Gen. Pope. Gen. Grant and party arrived at Merced, Cal.. Monday evening, en route from the Yo Semite. A reception was tendered him by the citizens, and an addreBS of welcome presented followed by a ball. A Vienna correspondent has "trustworthy information" that Binmarck, while at Vienna, concluded a convention for uniting the Austrian and Germán armies for defensivo purposes Whales are the most belligerent fish, they so often resort to blows.