A Demand From The Emperor Of Russia 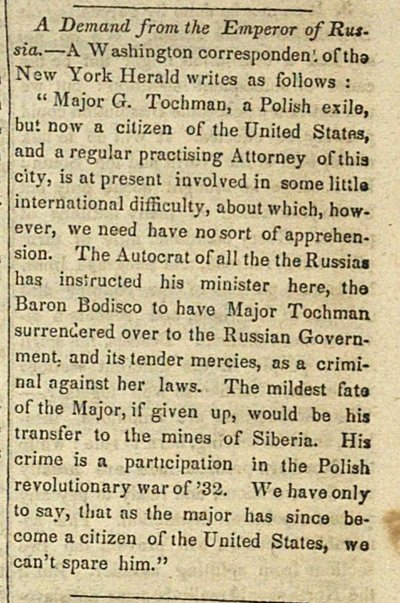 New York Herald writes as follows : " Major G. Tochman, a Polish exile, bui now a citizen of the United StatM, and a regular practising Attorney ofthia city, is at present involved in sorne littla international difficulty, about which, however, we need have nosort ofapprehension. The Autocrat of all the the Russias has insÃ­ructed his minister here, the Baron Bodisco to have Major Tochman surrendered over to the Russian Government and its tender mercies, as a criminal against her laws. The mildest fata of the Major, ifgiven up, would ba his transfer to the mines of Siberia. His crime is a participation in the Polish revolutionary war of '32. We have only o say, that as the major has since becomeacifizen of the United States, we can't spare him."