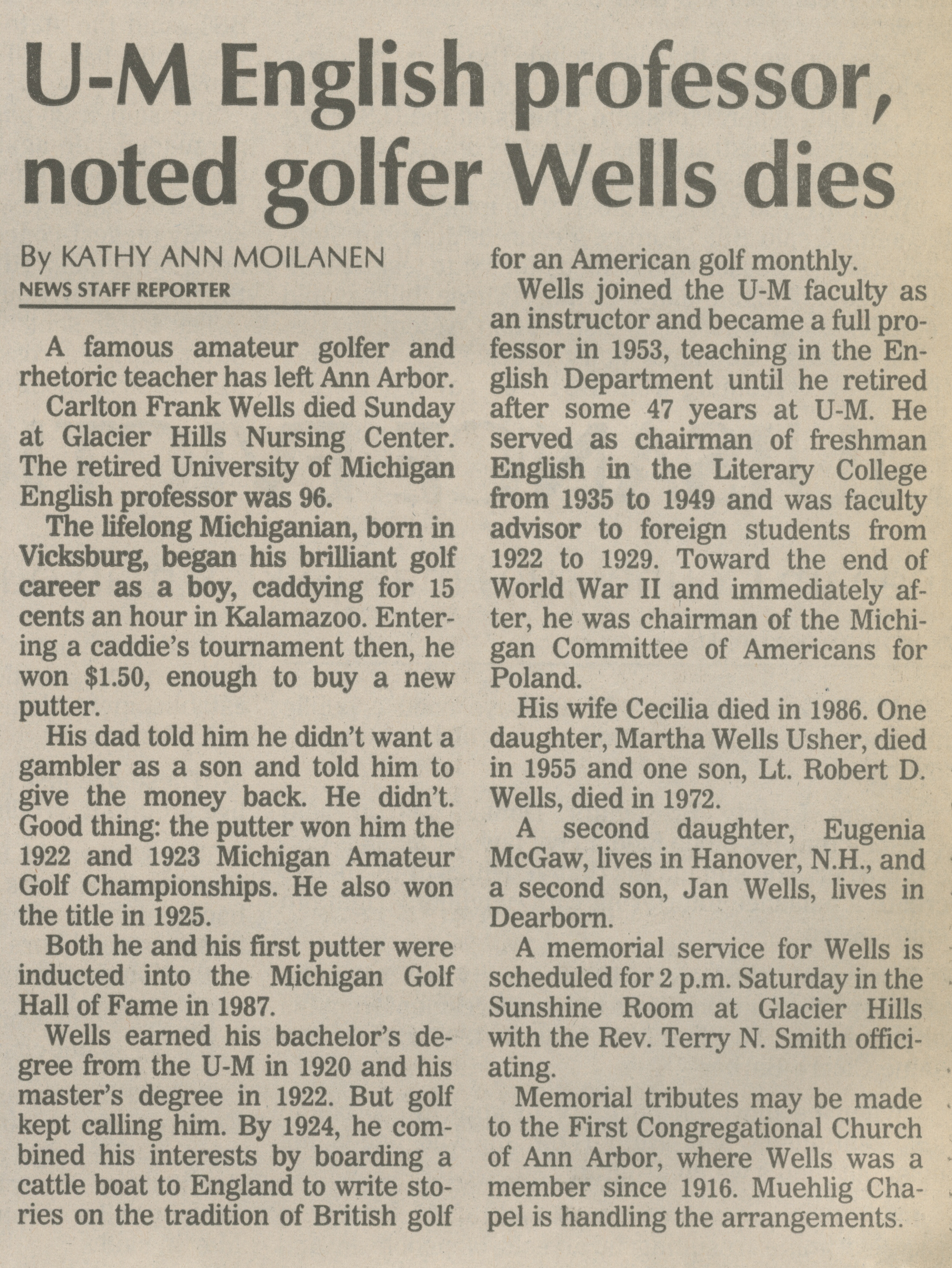 A famous amateur golfer and rhetoric teacher has left Ann Arbor.
Carlton Frank Wells died Sunday at Glacier Hills Nursing Center. The retired University of Michigan English professor was 96.
The lifelong Michiganian, born in Vicksburg, began his brilliant golf career as a boy, caddying for 15 cents an hour in Kalamazoo. Entering a caddie’s tournament then, he won $1.50, enough to buy a new putter.
His dad told him he didn’t want a gambler as a son and told him to give the money back. He didn’t. Good thing: the putter won him the 1922 and 1923 Michigan Amateur Golf Championships. He also won the title in 1925.
Both he and his first putter were inducted into the Michigan Golf Hall of Fame in 1987.
Wells earned his bachelor’s degree from the U-M in 1920 and his master’s degree in 1922. But golf kept calling him. By 1924, he combined his interests by boarding a cattle boat to England to write stories on the tradition of British golf for an American golf monthly.
Wells joined the U-M faculty as an instructor and became a full professor in 1953, teaching in the English Department until he retired after some 47 years at U-M. He served as chairman of freshman English in the Literary College from 1935 to 1949 and was faculty advisor to foreign students from 1922 to 1929. Toward the end of World War II and immediately after, he was chairman of the Michigan Committee of Americans for Poland.
His wife Cecilia died in 1986. One daughter, Martha Wells Usher, died in 1955 and one son, Lt. Robert D. Wells, died in 1972.
A second daughter, Eugenia McGaw, lives in Hanover, N.H., and a second son, Jan Wells, lives in Dearborn.
A memorial services for wells is scheduled for 2 p.m. Saturday in the Sunshine Room at Glacier Hills with the Rev. Terry N. Smith officiating.
Memorial tributes may be made to the First Congregational Church of Ann Arbor, where Wells was a member since 1916. Muehlig Chapel is handling the arrangements.