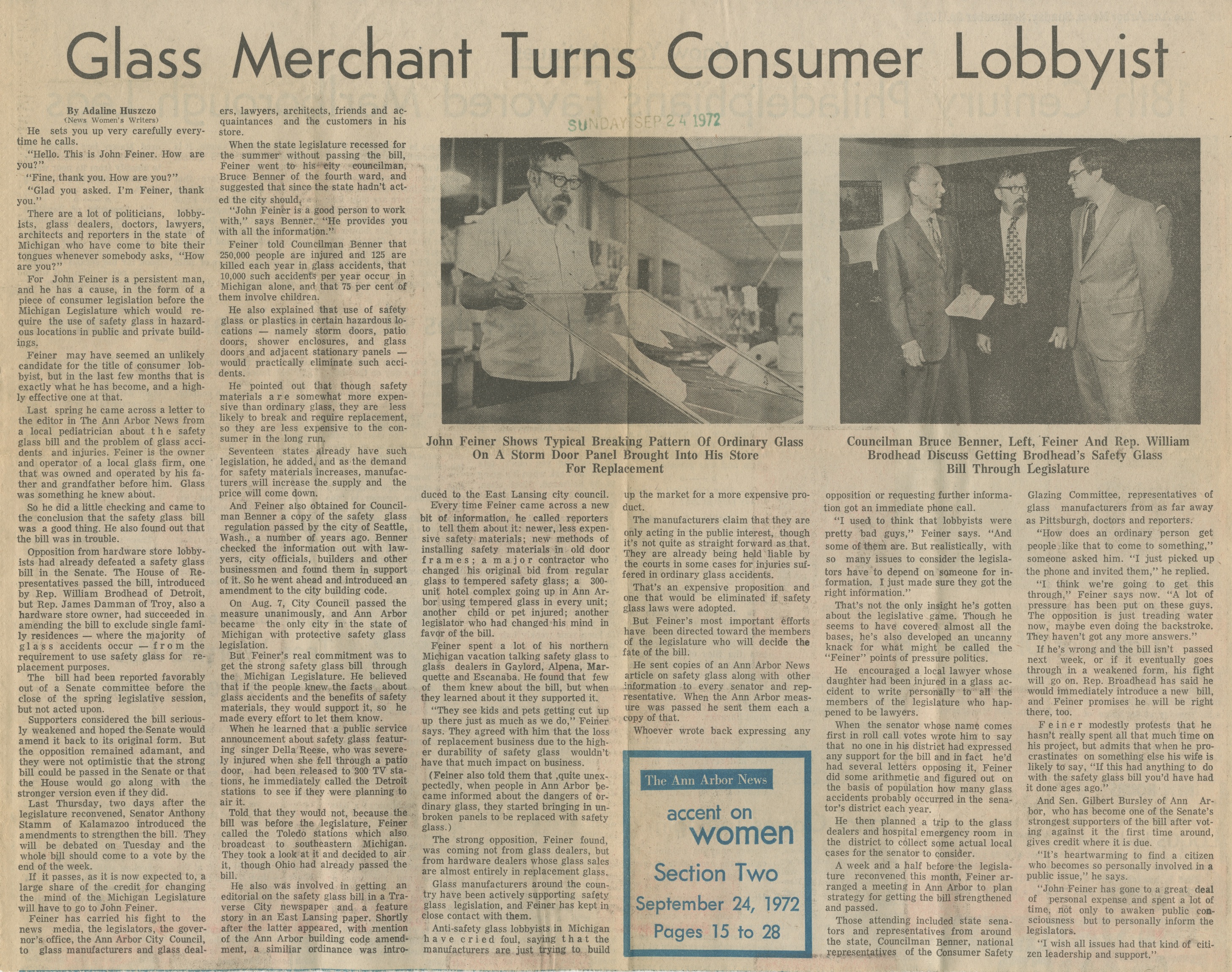 He sets you up very carefully every time he calls.

"Hello. This is John Feiner. How are you?"

There are a lot of politicians, lobbyists, glass dealers, doctors, lawyers, architects and reporters in the state of Michigan who have come to bite their tongues whenever somebody asks, "How are you?"

For John Feiner is a persistent man, and he has a cause, in the form of a piece of consumer legislation before the Michigan Legislature which would require the use of safety glass in hazardous locations in public and private buildings.

Feiner may have seemed an unlikely candidate for the title of consumer lobbyist, but in the last few months that is exactly what he has become, and a highly effective one at that.

Last spring he came across a letter to the editor in The Ann Arbor News from a local pediatrician about the safety glass bill and the problem of glass accidents and injuries. Feiner is the owner and operator of a local glass firm, one that was owned and operated by his father and grandfather before him. Glass was something he knew about.

So he did a little checking and came to the conclusion that the safety glass bill was a good thing. He also found out that the bill was in trouble.

Opposition from hardware store lobbyists had already defeated a safety glass bill in the Senate. The House of Representatives passed the bill, introduced by Rep. William Brodhead of Detroit, but Rep. James Damman of Troy, also a hardware store owner, had succeeded in amending the bill to exclude single family residences - where the majority of glass accidents occur- from the requirement to use safety glass for replacement purposes.

The bill had been reported favorably out of a Senate committee before the close of the spring legislative session, but not acted upon.

Supporters considered the bill seriously weakened and hoped the Senate would amend it back to its original form. But the opposition remained adamant, and they were not optimistic that the strong bill could be passed in the Senate or that the House would go along with the stronger version even if they did.

Last Thursday, two days after the legislature reconvened, Senator Anthony Stamm of Kalamazoo introduced the amendments to strengthen the bill. They will be debated on Tuesday and the whole bill should come to a vote by the end of the week.

If it passes, as it is now expected to, a large share of the credit for changing the mind of the MIchigan Legislature will have to go to John Feiner.

Feiner has carried his fight to the news media, the legislators, the governor's office, the Ann Arbor City Council, to glass manufacturers and glass dealers, lawyers, architects, friends, and acquaintances and the customers in his store.

When the state legislature recessed for the summer without passing the bill, Feiner went to his city councilman, Bruce Benner of the fourth ward, and suggested that since the state hasn't acted the city should.

"John Feiner is a good person to work with," says Benner. "He provides you with all the information."

Feiner told Councilman Benner that 250,000 people are injured each year in glass accidents, that 10,000 such accidents per year occur in Michigan alone, and that 75 per cent of them involve children.

He also explained that use of safety glass or plastics in certain hazardous locations- namely storm doors, patio doors, shower enclosures, and glass doors and adjacent stationary panels- would practically eliminate such accidents.

He pointed out that though safety materials are somewhat more expensive than ordinary glass, they are less likely to break and require replacement, so they are less expensive to the consumer in the long run.

Seventeen states already have such legislation, he added, and as the demand for safety materials increases, manufacturers will increase the supply and the price will come down.

And Feiner also obtained for Councilman Benner a copy of the safety glass regulation passed by the city of Seattle, Wash., a number of years ago. Benner checked the information out with lawyers, city officials, builders and other businessmen and found them in support of it. So he went ahead and introduced an amendment to the city building code.

On Aug. 7, City Council passed the measure unanimously, and Ann Arbor became the only city in the state of Michigan with protective safety glass legislation.

But Feiner's real commitment was to get the strong safety glass bill through the Michigan Legislature. He believed that if the people knew the facts about glass accidents and the benefits of safety materials, they would support it, so he made every effort to let them know.

When he learned that a public service announcement about safety glass featuring singer Della Reese, who was severely injured when she fell through a patio door, had been released to 300 TV stations, he immediately called the Detroit stations to see if they were planning to air it.

Told that they would not, because the bill was before the legislature, Feiner called the Toledo stations which also broadcast to southeastern Michigan. They took a look at it and decided to air it, though Ohio had already passed the bill.

He also was involved in getting an editorial on the safety glass bill in Traverse City newspaper and a feature story in an East Lansing paper. Shortly after the latter appeared, with mention of the Ann Arbor building code amendment, a similar ordinance was introduced to the East Lansing city council.

Every time Feiner came across a new bit of information, he called reporters to tell them about it: newer, less expensive safety materials; new methods of installing safety materials in old door frames; a major contractor who changed his original bid from regular glass to tempered glass in every unit; another child or pet injured; another legislator who had changed his mind in favor of the bill.

Feiner spent a lot of his northern Michigan vacationtalking safety glass to glass dealers in Gaylord, Alpena, Marquette and Escanaba. He found that few of them knew about the bill, but when they learned about it they supported it.

"They see kids and pets getting cut up up there just as much as we do," Feiner says. They agreed with him that the loss of replacement business due to the higher durability of safety glass wouldn't have that much impact on business.

(Feiner also told them that, quite unexpectedly, when people in Ann Arbor became informed about the dangers of ordinary glass, they started bringing in unbroken panels to be replaced with safety glass.)

The strong opposition, Feiner found, was coming not from glass dealers, but from hardware dealers whose glass sales are almost entirely in replacement glass.

Glass manufacturers around the country have been actively supporting safety glass legislation, and Feiner has kept in close contact with them.

Anti-safety glass lobbyists in MIchigan have cried foul, saying that the manufacturers are just trying to build up the market for a more expensive product.

The manufacturers claim that they are only acting in the public interest, though it's not quite as straight forward as that. They are already being held liable by the courts in some cases for injuries suffered in ordinary glass accidents.

That's an expensive proposition and one that would be eliminated if safety glass laws were adopted.

But Feiner's most important efforts have been directed toward the members of the legislature who will decide the fate of the bill.

He sent copies of an Ann Arbor News article on safety glass along with other information to every senator and representative. When Ann Arbor measure was passed he sent them each a copy of that.

Whoever wrote back expressing any opposition or requesting further information got an immediate phone call.

"I used to think that lobbyists were pretty bad guys," Feiner says. "And some of them are. But realistically, with so many issues to consider the legislators have to depend on someone for information. I just made sure they got the right information."

That's not the only insight he's gotten about the legislative game. Though he seems to have covered almost all the bases, he's also developed an uncanny knack for what might be called the "Feiner" points of pressure politics.

He encouraged a local lawyer whose daughter had been injured in a glass accident to write personally to all the members of the legislature who happened to be lawyers.

When the senator whose name comes first in roll call votes wrote him to say that no one in his district had expressed any support for the bill and in fact he'd had several letters opposing it, Feiner did some arithmetic and figured out on the basis of population how many glass accidents probably occurred in the senator's district each year.

He then planned a trip to the glass dealers and hospital emergency room in the district to collect some actual local cases for the senator to consider.

A week and a half before the legislature reconvened this month, Feiner arranged a meeting in Ann Arbor to plan strategy for getting the bill strengthened and passed.

"How does an ordinary person get people like that to come to something," someone asked him. "I just picked up the phone and invited them," he replied.

"I think we're going to get this through," Feiner says now. "A lot of pressure has been put on these guys. The opposition is just treading water now, maybe even doing the backstroke. They haven't got any more answers."

If he's wrong and the bill isn't passed next week, or if it eventually goes through in a weakened form, his fight will go on. Rep. Broadhead has said he would immediately introduce a new bill, and Feiner promises he will be right there, too.

Feiner modestly protests that he hasn't really spent all that much time on his project, but admits that when he procrastinates on something else his wife is likely to say, "If this had anything to do with the safety glass bill you'd have had it done ages ago."

And Sen. Gilbert Bursley of Ann Arbor, who has become one of Senate's strongest supporters of the bill after voting against it the first time around, gives credit where it is due.

"It's heartwarming to find a citizen who becomes so personally involved in a public issue," he says.

"John Feiner has gone to a great deal of personal expense and spent a lot of time, not only to awaken public consciousness, but to personally inform the legislators.

"I wish all issues has that kind of citizen leadership and support."