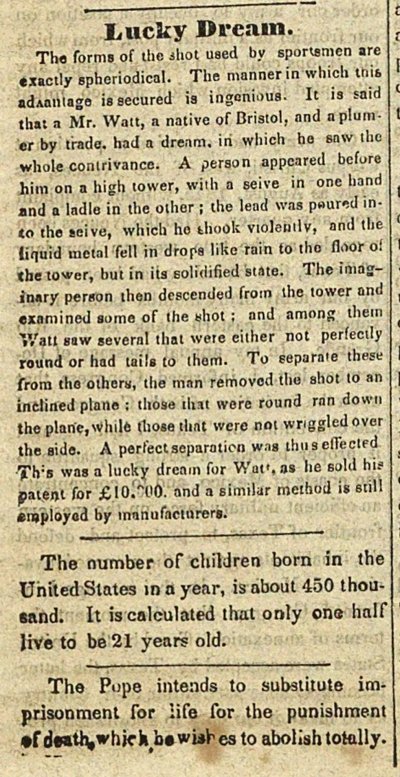 Lucky Dream. The forms of the shot used by sportsmen are exactly spheriodical. The manner in which this advantage is secured is ingenious. It is said that a Mr. Watt, a native of Bristol, and a plumer by trade, had a dream in which he saw the whole contrivance. A person appeared before him on a high tower, with a seive in one hand and a ladle in the other; the lead was poured into the seive, which he shook violently, and the liquid metal fell in drops like rain to the floor of the tower, but in its solidified state. The imaginary person then descended from the tower and examined some of the shot; and among them Watt saw several that were either not perfectly round or had tails to them. To separate these from the other, the man removed the shot to an inclined plane; those that were round ran down the plane, while those that were not wriggled over the side. A perfect separation was thus effected. This was a lucky dream for Watt, as he sold his patent for Â£10,000 and a similar method is still employed by manufacturers. The number of children born in the United States in a year, is about 450 thousand. It is calculated that only one half live to be 21 years old. The Pope intends to substitute imprisonment for life for the punishment by death, which he wishes to abolish totally.