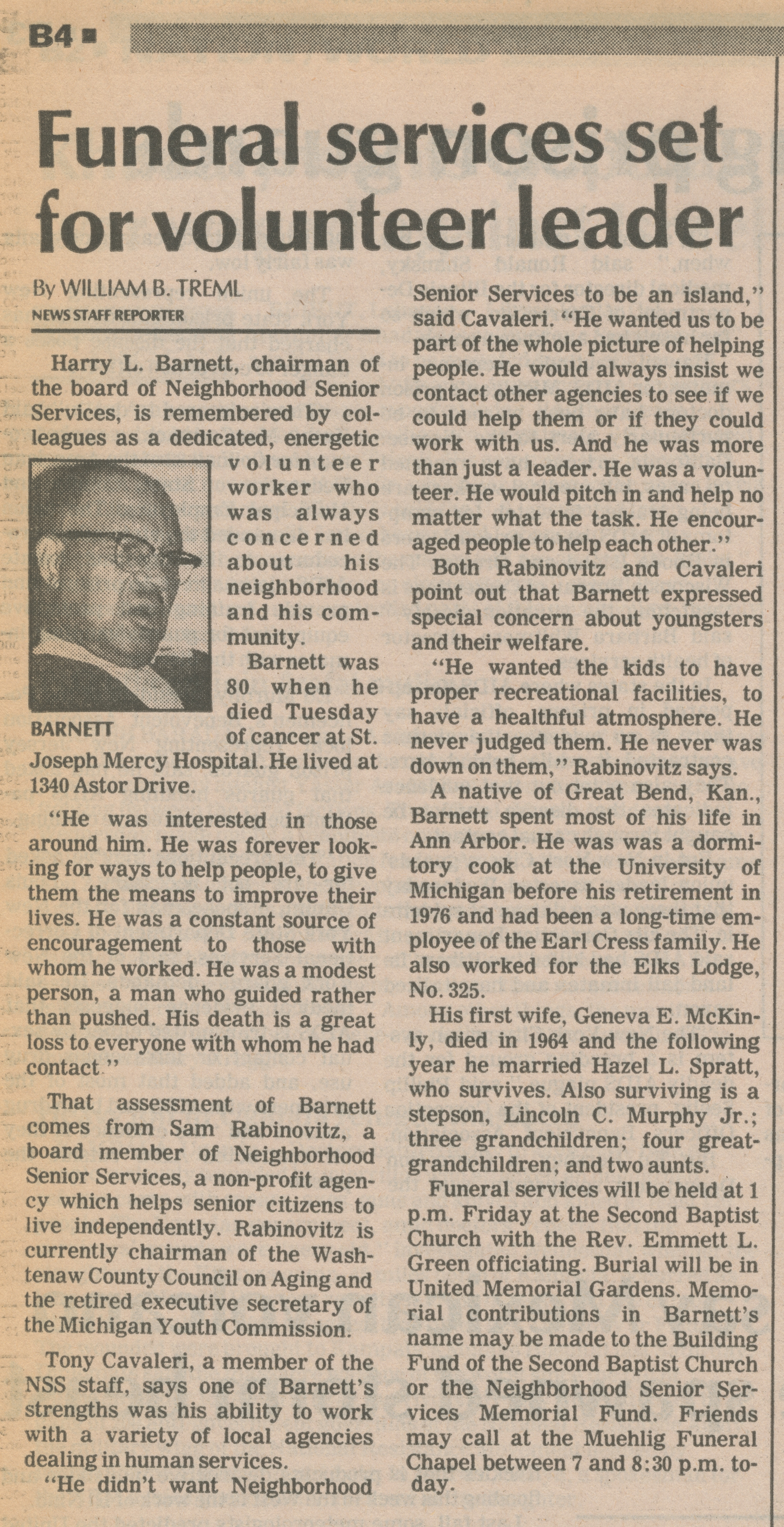 Harry L. Barnett, chairman of the board of Neighborhood Senior Services, is remembered by colleagues as a dedicated, energetic volunteer worker who was always concerned about his neighborhood and his community.
Barnett was 80 when he died Tuesday of cancer at St. Joseph Mercy Hospital. He lived at 1340 Astor Drive.
"He was interested in those around him. He was forever looking for ways to help people, to give them the means to improve their lives. He was a constant source of encouragement to those with whom he worked. He was a modest person, a man who guided rather than pushed. His death is a great loss to everyone with whom he had contact."
That assessment of Barnett comes from Sam Rabinovitz, a board member of Neighborhood Senior Services, a non-profit agency which helps senior citizens to live independently. Rabinovitz is currently chairman of the Washtenaw County Council on Aging and the retired executive secretary of the Michigan Youth Commission.
Tony Cavaleri, a member of the NSS staff, says one of Barnett's strengths was his ability to work with a variety of local agencies dealing in human services.
"He didn't want Neighborhood Senior Services to be an island," said Cavaleri. "He wanted us to be part of the whole picture of helping people. He would always insist we contact other agencies to see if we could help them or if they could work with us. And he was more than just a leader. He was a volunteer. He would pitch in and help no matter what the task. He encouraged people to help each other."
Both Rabinovitz and Cavaleri point out that Barnett expressed special concern about youngsters and their welfare.
"He wanted the kids to have proper recreational facilities, to have a healthful atmosphere. He never judged them. He never was down on them," Rabinovitz says.
A native of Great Bend, Kan., Barnett spent most of his life in Ann Arbor. He was a dormitory cook at the University of Michigan before his retirement in 1976 and had been a long-time employee of the Earl Cress family. He also worked for the Elks Lodge, No. 325.
His first wife, Geneva E. McKinly, died in 1964 and the following year he married Hazel L. Spratt, who survives. Also surviving is a stepson, Lincoln C. Murphy Jr.; three grandchildren; four great-grandchildren; and two aunts.
Funeral services will be held at 1 p.m. Friday at the Second Baptist Church with the Rev. Emmett L. Green officiating. Burial will be in United Memorial Gardens. Memorial contributions in Barnett's name may be made to the Building Fund of the Second Baptist Church or the Neighborhood Senior Services Memorial Fund. Friends may call at the Muehlig Funeral Chapel between 7 and 8:30 p.m. today.