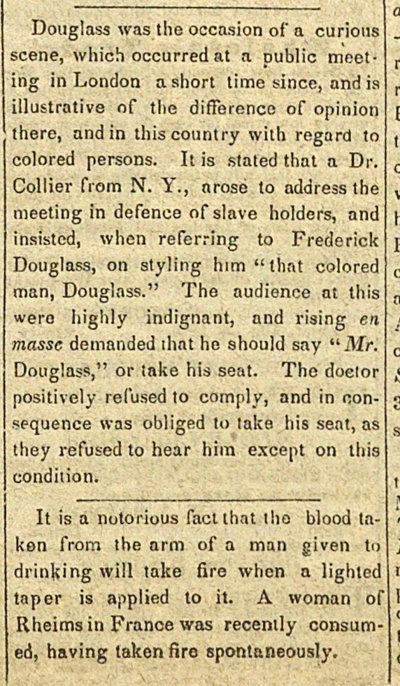 Douglass was the occasion of a curious scÃ¨ne, which occurred at a public meeting in London a short time since, and is illustrative of the difference of opiniÃ³n there, and in this country with regard to colored persons. It is stated that a Dr. Collier from N. Y., arÃ³se lo address the meeting in defence of slave holders, and insisted, when referring to Frederick Douglass, on styling him " that colored man, Douglass." The audience at this wero liighly indignant, and rising en masse demnnded ihat he should say "Mr. Douglass," or take his seat. The doeior positively refused to comply, and in oonsequence was obliged to take his sent, as they refused to hear him except on this condition. It is a nutorious factthat iho blood taken from the arm of a man given to drinking will take fire when a lighted taper is applied to it. A woman of Rheimsin France was recemly consumed, having laken fire spontaneously.