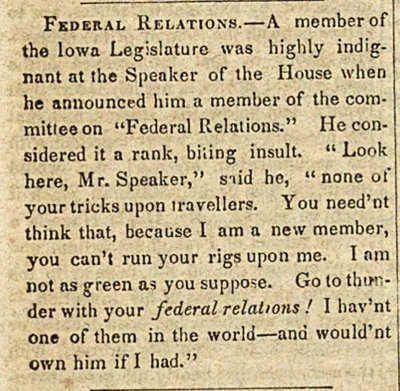 -A memberofthe lowa Legislatura was highly indignant at the Speaker of the House when he announced him a member of the committeeon "Federal Relations." He considered it a rank, biling insult. " Look here, Mr. Speaker," s-iid ho, "none of yourtricksupon travellers. You need'nt think that, because lama new member, you can't run your rigs upon me. I nm not as jreen as you suppose. Go to thÃ¼nder with your federal relations ! I hav'nt one of them in tlie world - and would'nt own him if I had."