A diverse group of folks 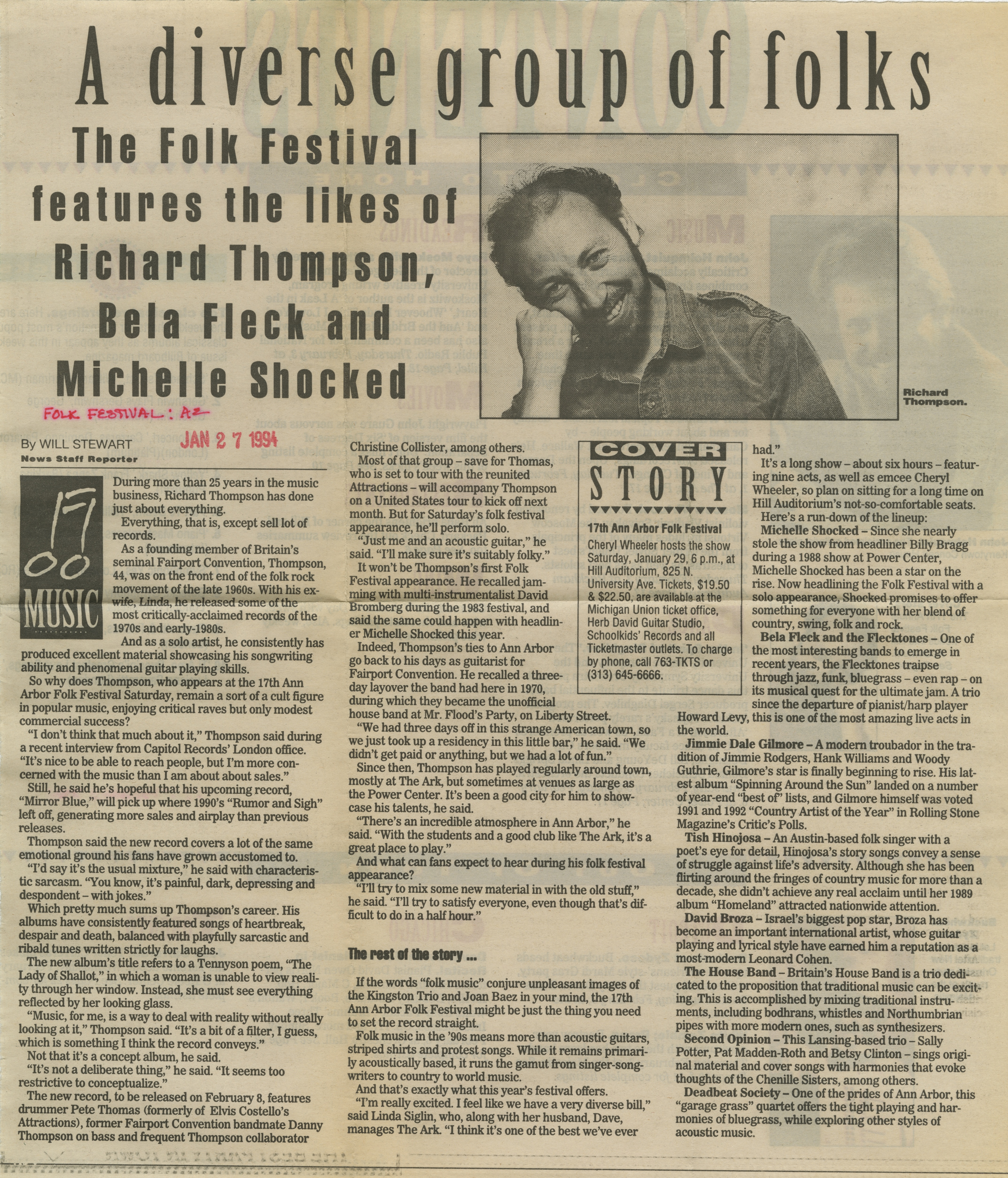 ﻿A diverse group of folks

During more than 25 years in the music business, Richard Thompson has done just about everything.

Everything, that is, except sell lot of records.

As a founding member of Britain’s seminal Fairport Convention, Thompson, 44, was on the front end of the folk rock movement of the late 1960s. With his ex-wife, Linda, he released some of the most critically-acclaimed records of the 1970s and early-1980s.

And as a solo artist, he consistently has produced excellent material showcasing his songwriting ability and phenomenal guitar playing skills.

So why does Thompson, who appears at the 17th Ann Arbor Folk Festival Saturday, remain a sort of a cult figure in popular music, enjoying critical raves but only modest commercial success?

“I don’t think that much about it,” Thompson said during a recent interview from Capitol Records’ London office. “It’s nice to be able to reach people, but I’m more concerned with the music than I am about about sales.”

Still, he said he’s hopeful that his upcoming record, “Mirror Blue,” will pick up where 1990’s “Rumor and Sigh” left off, generating more sales and airplay than previous releases.

Thompson said the new record covers a lot of the same emotional ground his fans have grown accustomed to.

Which pretty much sums up Thompson’s career. His albums have consistently featured songs of heartbreak, despair and death, balanced with playfully sarcastic and ribald tunes written strictly for laughs.

The new album’s title refers to a Tennyson poem, “The Lady of Shallot,” in which a woman is unable to view reality through her window. Instead, she must see everything reflected by her looking glass.

“Music, for me, is a way to deal with reality without really looking at it,” Thompson said. “It’s a bit of a filter, I guess, which is something I think the record conveys.”

Not that it’s a concept album, he said.

“It’s not a deliberate thing,” he said. “It seems too restrictive to conceptualize.”

Most of that group - save for Thomas, who is set to tour with the reunited Attractions - will accompany Thompson on a United States tour to kick off next month. But for Saturday’s folk festival appearance, he’ll perform solo.

“Just me and an acoustic guitar,” he said. “I’ll make sure it’s suitably folky.”

It won’t be Thompson’s first Folk Festival appearance. He recalled jamming with multi-instrumentalist David Bromberg during the 1983 festival, and said the same could happen with headliner Michelle Shocked this year.

Indeed, Thompson’s ties to Ann Arbor go back to his days as guitarist for Fairport Convention. He recalled a three-day layover the band had here in 1970, during which they became the unofficial house band at Mr. Flood’s Party, on Liberty Street.  “We had three days off in this strange American town, so we just took up a residency in this little bar,” he said. “We didn’t get paid or anything, but we had a lot of fun.”

Since then, Thompson has played regularly around town, mostly at The Ark, but sometimes at venues as large as the Power Center. It’s been a good city for him to showcase his talents, he said.

“There’s an incredible atmosphere in Ann Arbor,” he said. “With the students and a good club like The Ark, it’s a great place to play.”

And what can fans expect to hear during his folk festival appearance?

“I’ll try to mix some new material in with the old stuff,” he said. “I’ll try to satisfy everyone, even though that’s difficult to do in a half hour.”

The rest of the story...

If the words “folk music” conjure unpleasant images of the Kingston Trio and Joan Baez in your mind, the 17th Ann Arbor Folk Festival might be just the thing you need to set the record straight.

Folk music in the ’90s means more than acoustic guitars, striped shirts and protest songs. While it remains primarily acoustically based, it runs the gamut from singer-songwriters to country to world music.

And that’s exactly what this year’s festival offers.

“I’m really excited. I feel like we have a very diverse bill,” said Linda Siglin, who, along with her husband, Dave, manages The Ark. “I think it’s one of the best we’ve ever had.”

It’s a long show - about six hours - featuring nine acts, as well as emcee Cheryl Wheeler, so plan on sitting for a long time on Hill Auditorium’s not-so-comfortable seats. Here’s a run-down of the lineup:

Michelle Shocked - Since she nearly stole the show from headliner Billy Bragg during a 1988 show at Power Center, Michelle Shocked has been a star on the rise. Now headlining the Folk Festival with a solo appearance, Shocked promises to offer something for everyone with her blend of country, swing, folk and rock.

Bela Fleck and the Flecktones - One of the most interesting bands to emerge in recent years, the Flecktones traipse through jazz, funk, bluegrass - even rap - on its musical quest for the ultimate jam. A trio since the departure of pianist/harp player Howard Levy, this is one of the most amazing live acts in the world.

Jimmie Dale Gilmore - A modem troubador in the tradition of Jimmie Rodgers, Hank Williams and Woody Guthrie, Gilmore’s star is finally beginning to rise. His latest album “Spinning Around the Sun” landed on a number of year-end “best of’ lists, and Gilmore himself was voted 1991 and 1992 “Country Artist of the Year” in Rolling Stone Magazine’s Critic’s Polls.

Tish Hinojosa - An Austin-based folk singer with a poet’s eye for detail, Hinojosa’s story songs convey a sense of struggle against life’s adversity. Although she has been flirting around the fringes of country music for more than a decade, she didn’t achieve any real acclaim until her 1989 album “Homeland” attracted nationwide attention.

David Broza - Israel’s biggest pop star, Broza has become an important international artist, whose guitar playing and lyrical style have earned him a reputation as a most-modem Leonard Cohen.

The House Band - Britain’s House Band is a trio dedicated to the proposition that traditional music can be exciting. This is accomplished by mixing traditional instruments, including bodhrans, whistles and Northumbrian pipes with more modern ones, such as synthesizers.

Second Opinion - This Lansing-based trio - Sally Potter, Pat Madden-Roth and Betsy Clinton - sings original material and cover songs with harmonies that evoke thoughts of the Chenille Sisters, among others.

Deadbeat Society - One of the prides of Ann Arbor, this “garage grass” quartet offers the tight playing and harmonies of bluegrass, while exploring other styles of acoustic music.