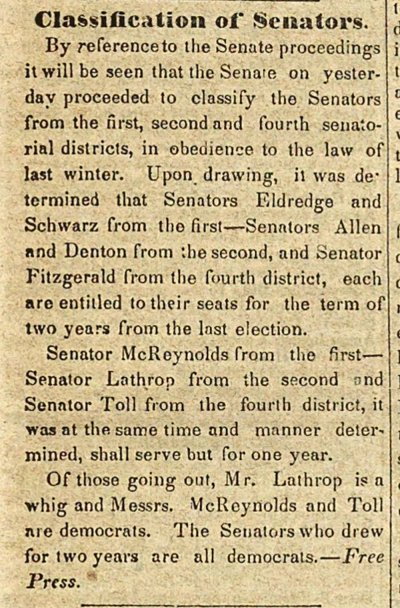 By referenceto the Senate proceedings itwill be seen that the Senaie on yesterday proceeded to classify the Senators from the first, second and fourth senatorial districts, n obedience to the law of last winter. Upon drawing, il was de termined that Senators Eldredge and Schwarz from tlio first - Senators Allen and DentÃ³n from the second, and Senator Fitzgerald from the fourth district, each aro entitled tothcir seats for the term of two years from the lnst election. Senator McReynolds from the first - Senator Lathrop from the second nnd Senator Toll from the fourth district, it was nt the same time and manner deter mined, shall serve but for one year. Of those going out, Mr. Lathrop is a whig and Messrs. McReynolds and Toll me democrats. The Senators who drew