Terror in the Streets 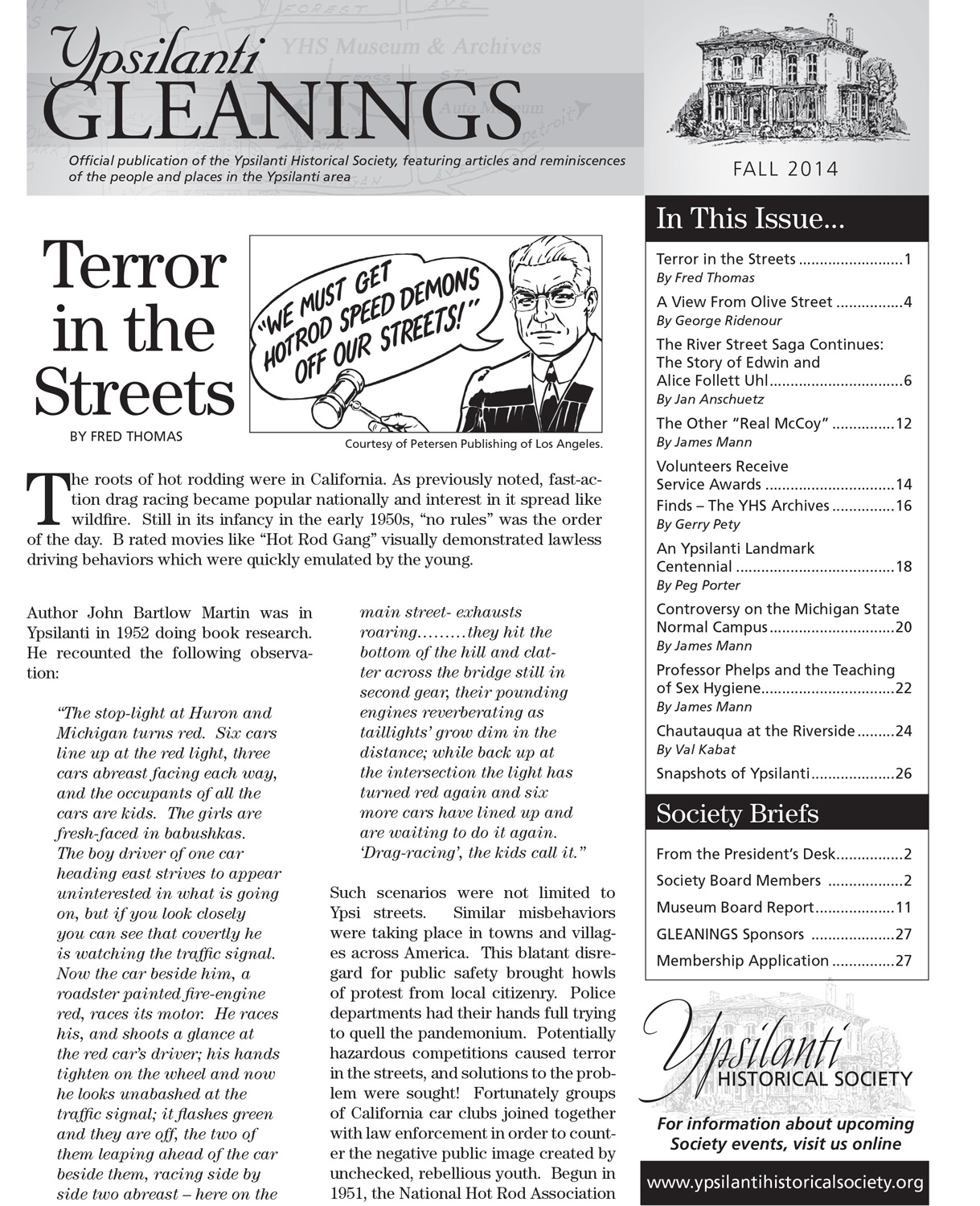 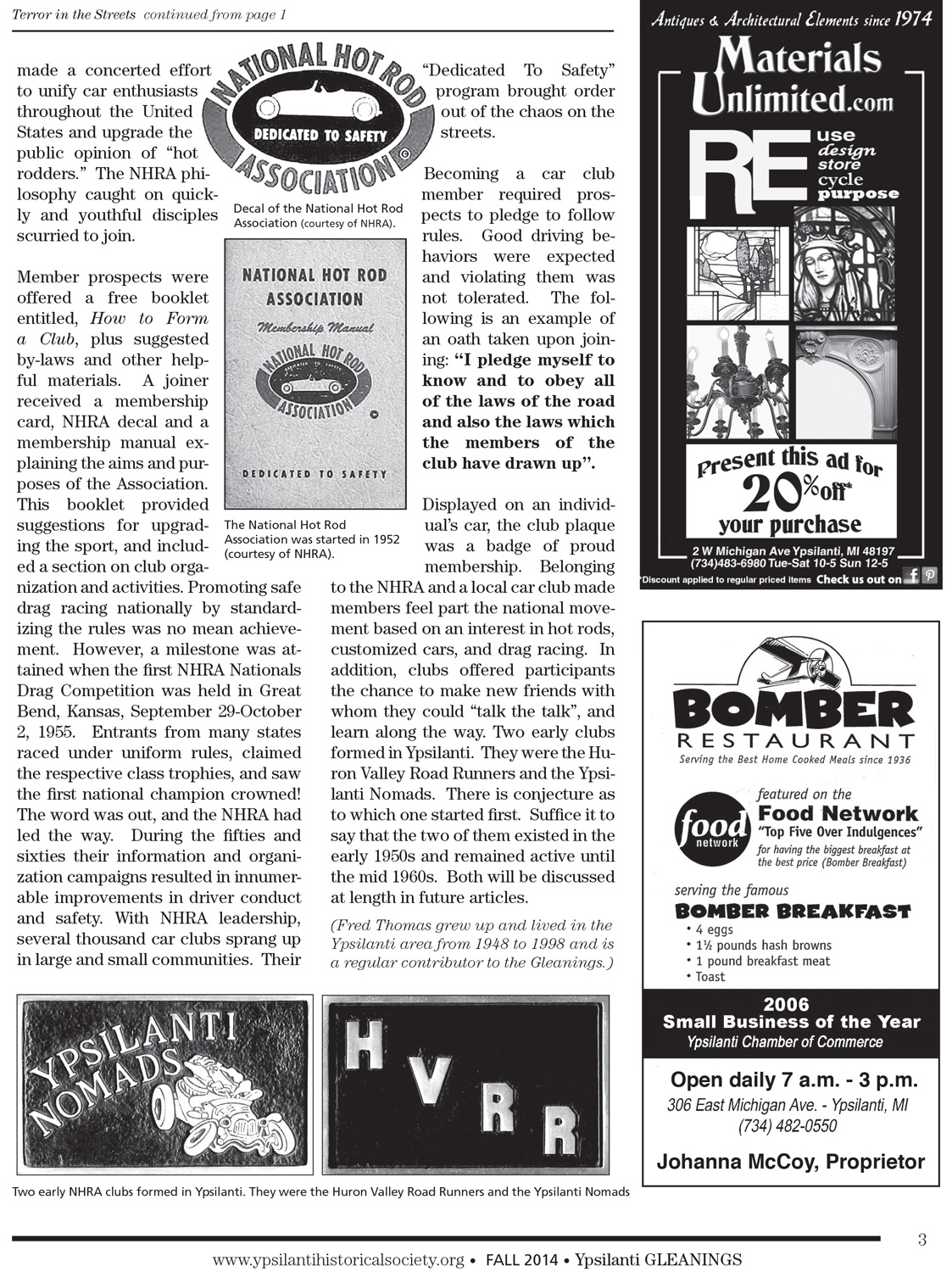 The roots of hot rodding were in California. As previously noted, fast-action drag racing became popular nationally and interest in it spread like wildfire. Still in its infancy in the early 1950s, “no rules” was the order of the day. B rated movies like “Hot Rod Gang” visually demonstrated lawless driving behaviors which were quickly emulated by the young.

Author John Bartlow Martin was in Ypsilanti in 1952 doing book research. He recounted the following observation: “The stop-light at Huron and Michigan turns red. Six cars line up at the red light, three cars abreast facing each way, and the occupants of all the cars are kids. The girls are fresh-faced in babushkas. The boy driver of one car heading east strives to appear uninterested in what is going on, but if you look closely you can see that covertly he is watching the traffic signal. Now the car beside him, a roadster painted fire-engine red, races its motor. He races his, and shoots a glance at the red car’s driver; his hands tighten on the wheel and now he looks unabashed at the traffic signal; it flashes green and they are off, the two of them leaping ahead of the car beside them, racing side by side two abreast – here on the main street- exhausts roaring………they hit the bottom of the hill and clatter across the bridge still in second gear, their pounding engines reverberating as taillights’ grow dim in the distance; while back up at the intersection the light has turned red again and six more cars have lined up and are waiting to do it again. ‘Drag-racing’, the kids call it.”

Such scenarios were not limited to Ypsi streets. Similar misbehaviors were taking place in towns and villages across America. This blatant disregard for public safety brought howls of protest from local citizenry. Police departments had their hands full trying to quell the pandemonium. Potentially hazardous competitions caused terror in the streets, and solutions to the problem were sought! Fortunately groups of California car clubs joined together with law enforcement in order to counter the negative public image created by unchecked, rebellious youth. Begun in 1951, the National Hot Rod Association made a concerted effort to unify car enthusiasts throughout the United States and upgrade the public opinion of “hot rodders.” The NHRA philosophy caught on quickly and youthful disciples scurried to join.

Member prospects were offered a free booklet entitled, How to Form a Club, plus suggested by-laws and other helpful materials. A joiner received a membership card, NHRA decal and a membership manual explaining the aims and purposes of the Association. This booklet provided suggestions for upgrading the sport, and included a section on club organization and activities. Promoting safe drag racing nationally by standardizing the rules was no mean achievement. However, a milestone was attained when the first NHRA Nationals Drag Competition was held in Great Bend, Kansas, September 29-October 2, 1955. Entrants from many states raced under uniform rules, claimed the respective class trophies, and saw the first national champion crowned! The word was out, and the NHRA had led the way. During the fifties and sixties their information and organization campaigns resulted in innumerable improvements in driver conduct and safety. With NHRA leadership, several thousand car clubs sprang up in large and small communities. Their “Dedicated To Safety” program brought order out of the chaos on the streets.

Becoming a car club member required prospects to pledge to follow rules. Good driving behaviors were expected and violating them was not tolerated. The following is an example of an oath taken upon joining: “I pledge myself to know and to obey all of the laws of the road and also the laws which the members of the club have drawn up”

Displayed on an individual’s car, the club plaque was a badge of proud membership.
Belonging to the NHRA and a local car club made members feel part the national movement based on an interest in hot rods, customized cars, and drag racing. In addition, clubs offered participants the chance to make new friends with whom they could “talk the talk”, and learn along the way. Two early clubs formed in Ypsilanti. They were the Huron Valley Road Runners and the Ypsilanti Nomads. There is conjecture as to which one started first. Suffice it to say that the two of them existed in the early 1950s and remained active until the mid 1960s. Both will be discussed at length in future articles.

(Fred Thomas grew up and lived in the Ypsilanti area from 1948 to 1998 and is a regular contributor to the Gleanings.)

Photo 2: The National Hot Rod Association was started in 1952 (courtesy of NHRA).

Photo 4: Two early NHRA clubs formed in Ypsilanti. They were the Huron Valley Road Runners and the Ypsilanti Nomads