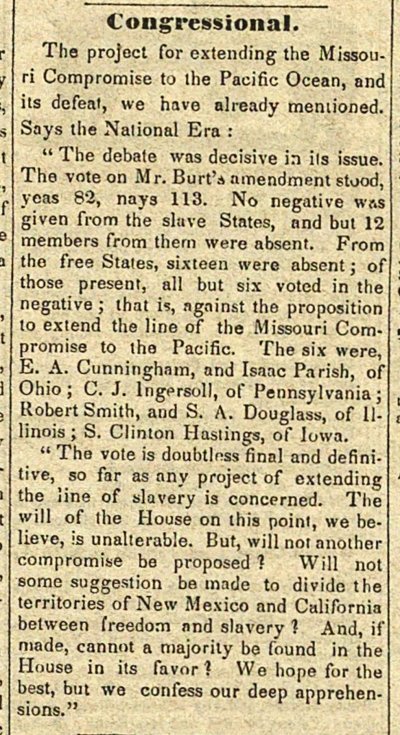 The project for extending the Missouri Compromise to the Pacific Ocean, and its defeat, we have already meniioned. Says the National Era : " The debate was decisive in ils issue. The vote on Mr. Burt' amendment stood, yeas 82, nays 113. No negative was given from the slave States, and but 12 members from thern were absent. From tho free States, sixteen were absent ; of those present, all but six voted in the negative ; that is, ngainst the proposition to extend the line of the Missouri Compromise to the Pacific. The six were, E. A. Cunningham, and Isaac Parish, of Ohio; C. J. lngfrsoll, of Pennsylvania ; Robert Smith, and S. A. Douglass, of 11linois ; S. Clinton Hastings, of lowa. " The vote is doubtlnss Vinal and definitive, so far as any project of extending the line of slavery is concerned. The will of the House on this point, we believe, is unalterable. But, will not another compromise be proposed ? Will not some suggestion be made to divido the territories of New Mexico and California between freedom nnd slavery ? And, if made, cannot a majority be found in the House in its favor] We hope for the best, bm we confess our deep apprehensions."