S. P. Chase, Of Cincinnnti, Has Forwarded To Us A Beautiful... 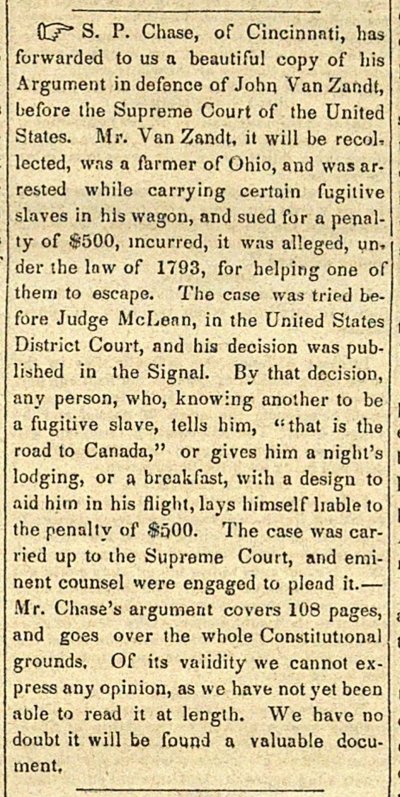 {L? S. P. Chase, of Cincinnnti, has forwarded to us a beautiful copy of his Argument in dofence of John Van Zandt, before tiie Supreme Court of the United States. Mr. Van Zandt, it will be recoK lected, was a ftirmer of Ohio, and was arrested while carrying certain fugilive slaves n hls wagon, and sued for a penalty of $500, incurred, it was alleged, un der the lnw of 1793, for helping one o them to escape. The case was tried before Judge McLenn, in the United States District Court, nnd his decisiÃ³n was published in the Signal. By that decisiÃ³n, any person, who, knowing another to be a fugitive slave, tells him, "that is the road to Canada," or gives him a night's lodging, or a brcakfast, with a design to aid hitn in his Ã±ight, lays himself liable to the penal ly of $j00. The case was carried up to the Supreme Court, nnd eminent counsel were engaged to plead it. - Mr. Chase's argument covers 108 pages, and goes over the whole Constitutional grounds. Of its vaÃ¼dity we cannot express any opiniÃ³n, as we have notyet been able to read it at length. We have no doubt it will be found a valuable document,