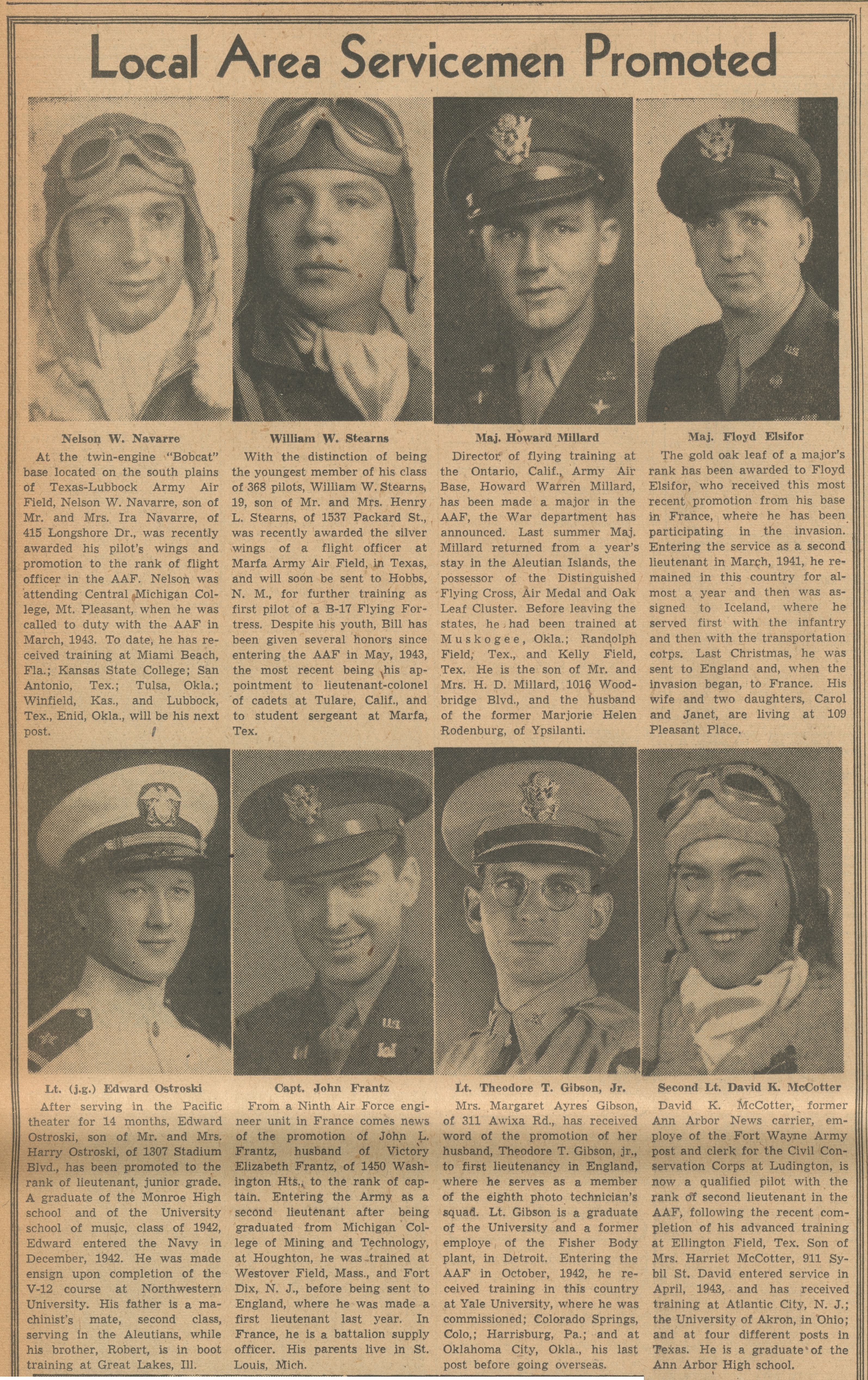 At the twin-engine “Bobcat” base located on the south plains of Texas-Lubbock Army Air Field, Nelson W. Navarre, son of Mr. and Mrs. Ira Navarre, of 415 Longshore Dr., was recently awarded his pilot’s wings and promotion to the rank of flight officer in the AAF. Nelson was attending Central Michigan College, Mt. Pleasant, when he was called to duty with the AAF in March, 1943. To date, he has received training at Miami Beach, Fla.; Kansas State College; San Antonio, Tex.; Tulsa, Okla.; Winfield, Kas.; and Lubbock, Tex., Enid, Okla., will be his next post.

With the distinction of being the youngest member of his class of 368 pilots, William W. Stearns, 19, son of Mr. and Mrs. Henry L. Stearns, of 1537 Packard St., was recently awarded the silver wings of a flight officer at Marfa Army Air Field, in Texas, and will soon be sent to Hobbs, N. M., for further training as first pilot of a B-17 Flying Fortress. Despite his youth, Bill has been given several honors since entering the AAF in May, 1943, the most recent being his appointment to lieutenant-colonel of cadets at Tulare, Calif., and to student sergeant at Marfa, Tex.

Director of flying training at the Ontario, Calif., Army Air Base, Howard Warren Millard, has been made a major in the AAF, the War department has announced. Last summer Maj. Millard returned from a year’s stay in the Aleutian Islands, the possessor of the Distinguished Flying Cross, Air Medal and Oak Leaf Cluster. Before leaving the states, he had been trained at Muskogee, Okla.; Randolph Field; Tex., and Kelly Field, Tex. He is the son of Mr. and Mrs. H. D. Millard, 1016 Woodbridge Blvd., and the husband of the former Marjorie Helen Rodenburg, of Ypsilanti.

The gold oak leaf of a major’s rank has been awarded to Floyd Elsifor, who received this most recent promotion from his base in France, where he has been participating in the invasion. Entering the service as a second lieutenant in March, 1941, he remained in this country for almost a year and then was assigned to Iceland, where he served first with the infantry and then with the transportation corps. Last Christmas, he was sent to England and, when the invasion began, to France. His wife and two daughters, Carol and Janet, are living at 109 Pleasant Place.

After serving in the Pacific theater for 14 months, Edward Ostroski, son of Mr. and Mrs. Harry Ostroski, of 1307 Stadium Blvd., has been promoted to the rank of lieutenant, junior grade. A graduate of the Monroe High school and of the University school of music, class of 1942, Edward entered the Navy in December, 1942. He was made ensign upon completion of the V-12 course at Northwestern University. His father is a machinist’s mate, second class, serving in the Aleutians, while his brother, Robert, is in boot training at Great Lakes, Ill.

From a Ninth Air Force engineer unit in France comes news of the promotion of John L. Frantz, husband of Victory Elizabeth Frantz, of 1450 Washington Hts., to the rank of captain. Entering the Army as a second lieutenant after being graduated from Michigan College of Mining and Technology, at Houghton, he was trained at Westover Field, Mass., and Fort Dix, N. J., before being sent to England, where he was made a first lieutenant last year. In France, he is a battalion supply officer. His parents live in St. Louis, Mich.

Mrs. Margaret Ayres Gibson, of 311 Awiza Rd., has received work of the promotions of her husband, Theodore T. Gibson, jr., to first lieutenancy in England, where he serves as a member of the eighth photo technician’s squad. Lt. Gibson is a graduate of the University and a former employe of the Fisher Body plant, in Detroit. Entering the AAF in October, 1942, he received training in this country at Yale University, where he was commissioned; Colorado Springs, Colo,; Harrisburg, Pa.; and at Oklahoma City, Okla., his last post before going overseas.

David K. McCotter, former Ann Arbor News carrier, employe of the Fort Wayne Army post and clerk for the Civil Conservation Corps at Ludington, is now a qualified pilot with the rank of second lieutenant in the AAF, following the recent completion of his advanced training at Ellington Field, Tex. Son of Mrs. Harriet McCotter, 911 Sybil St. David entered service in April, 1943, and has received training at Atlantic City, N. J.; the University of Akron, in Ohio; and at four different posts in Texas. He is a graduate of the Ann Arbor High school.