Making A Game Of The Classics 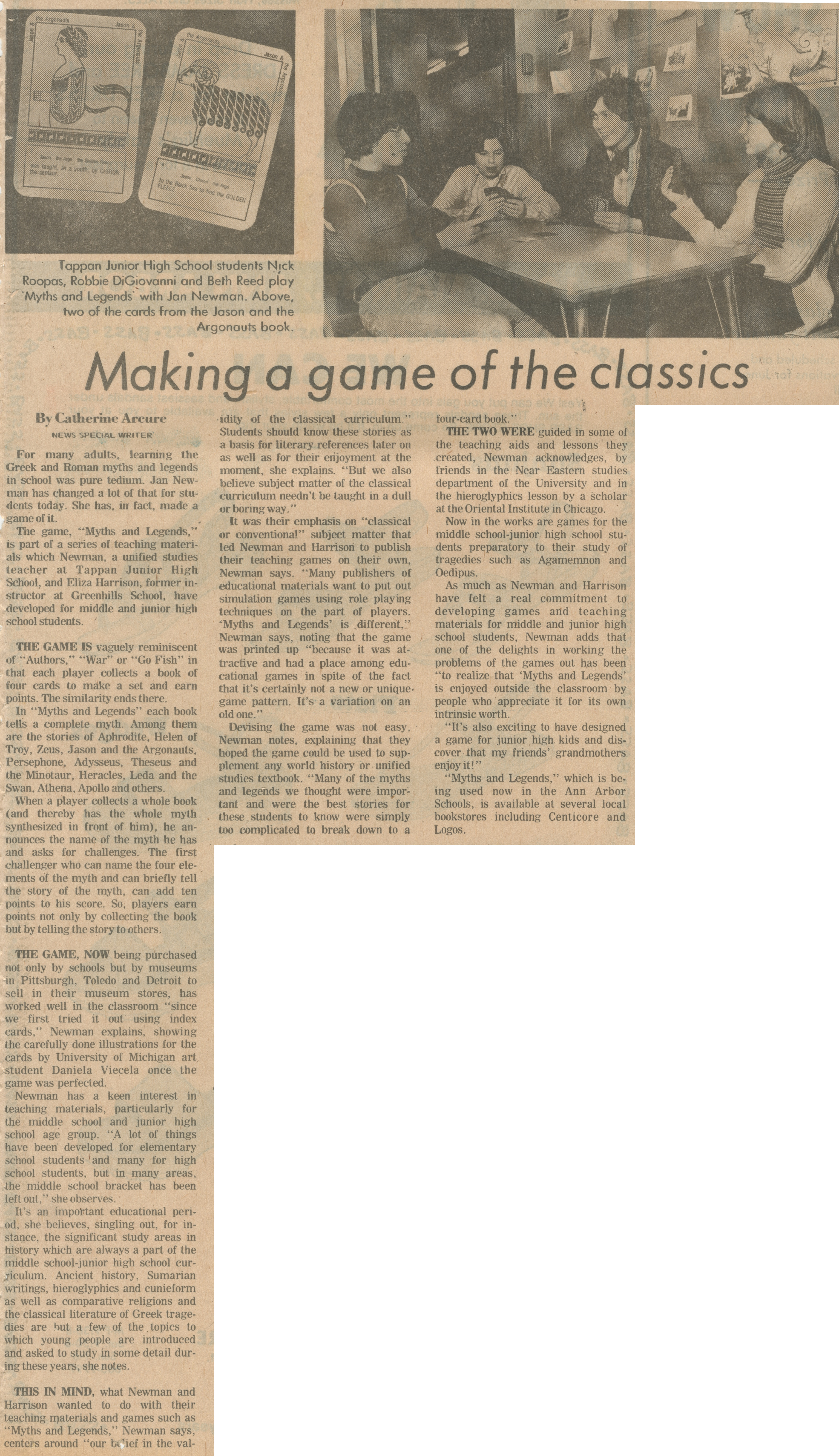 ﻿Tappan Junior High School Students Nick Roopas, Robbie DiGiovanni and Beth Reed play 'Myths and Legends' with Jan Newman. Above, two of the cards from the Jason and the Argonauts book.

Making a game of the classics

For many adults, learning the Greek and Roman myths and legends in school was pure tedium. Jan Newman has changed a lot of that for students today. She has. in fact, made a game of it.

The game, "Myths and Legends.” is part of a series of teaching materials which Newman, a unified studies teacher at Tappan Junior High School, and Eliza Harrison, former instructor at Greenhills School, have developed for middle and junior high school students.

THE GAME IS vaguely reminiscent of “Authors,” “War” or “Go Fish” in that each player collects a book of four cards to make a set and earn points. The similarity ends there.

In “Myths and Legends” each book tells a complete myth. Among them are the stories of Aphrodite, Helen of Troy, Zeus, Jason and the Argonauts, Persephone, Adysseus, Theseus and the Minotaur, Heracles, Leda and the Swan, Athena, Apollo and others.

When a player collects a whole book (and thereby has the whole myth synthesized in front of him), he announces the name of the myth he has and asks for challenges. The first challenger who can name the four elements of the myth and can briefly tell the story of the myth, can add ten points to his score. So, players earn points not only by collecting the book but by telling the story to others.

THE GAME, NOW being purchased not only by schools but by museums in Pittsburgh, Toledo and Detroit to sell in their museum stores, has worked well in the classroom "since we first tried it out using index cards," Newman explains, showing the carefully done illustrations for the cards by University of Michigan art student Daniela Viecela once the game was perfected.

It's an important educational period, she believes, singling out, for instance, the significant study areas in history which are always a part of the middle school-junior high school curriculum. Ancient history, Sumarian writings, hieroglyphics and cunieform as well as comparative religions and the classical literature of Greek tragedies are but a few of the topics to which young people are introduced and asked to study in some detail during these years, she notes.

THIS IN MIND, what Newman and Harrison wanted to do with their teaching materials and games such as "Myths and Legends," Newman says, centers around "Our belief in the validity of the classical curriculum.” Students should know these stories as a basis for literary references later on as well as for their enjoyment at the moment, she explains. “But we also believe subject matter of the classical curriculum needn’t be taught in a dull or boring way.”

It was their emphasis on "classical or conventional” subject matter that led Newman and Harrison to publish their teaching games on their own, Newman says. “Many publishers of educational materials want to put out simulation games using role playing techniques on the part of players. "Myths and Legends’ is different,” Newman says, noting that the game was printed up “because it was attractive and had a place among educational games in spite of the fact that it’s certainly not a new or unique-game pattern. It’s a variation on an old one.”

Devising the game was not easy, Newman notes, explaining that they hoped the game could be used to supplement any world history or unified studies textbook. “Many of the myths and legends we thought were important and were the best stories for these students to know were simply too complicated to break down to a four-card book. "

THE TWO WERE guided in some of the teaching aids and lessons they created, Newman acknowledges, by friends in the Near Eastern studies department of the University and in the hieroglyphics lesson by a scholar at the Oriental Institute in Chicago.

Now in the works are games for the middle school-junior high school students preparatory to their study of tragedies such as Agamemnon and Oedipus.

As much as Newman and Harrison have felt a real commitment to developing games add teaching materials for middle and junior high school students, Newman adds that one of the delights in working the problems of the games out has been “to realize that ‘Myths and Legends’ is enjoyed outside the classroom by people who appreciate it for its own intrinsic worth.

“It’s also exciting to have designed a game for junior high kids and discover that my friends’ grandmothers enjoy it!”

“Myths and Legends,” which is being used now in the Ann Arbor Schools, is available at several local bookstores including Centicore and Logos.