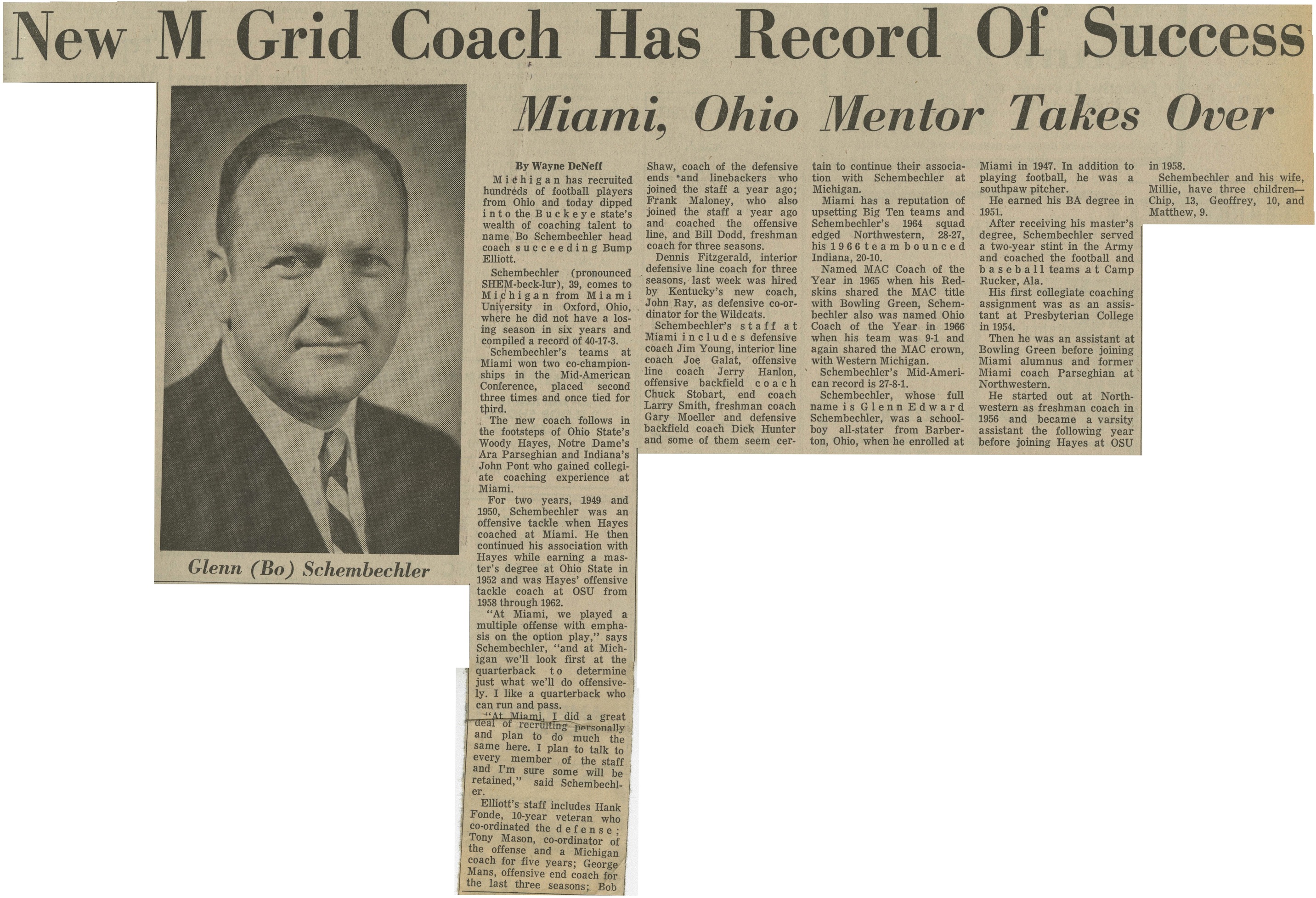 NEW M GRID COACH HAS RECORD OF SUCCESS Miami, Ohio Mentor Takes Over By Wayne DeNeff Michigan has recruited hundreds of football players from Ohio and today dipped into the Buckeye state’s wealth of coaching talent to name Bo Schembechler head coach succeeding Bump Elliott. Schembechler (pronounced SHEM-beck-lur), 39, comes to Michigan from Miami University in Oxford, Ohio, where he did not have a losing season in six years and compiled a record of 40-17-3. Schembechler’s teams at Miami won two co-championships in the Mid-American Conference, placed second three times and once tied for third. The new coach follows in the footsteps of Ohio State’s Woody Hayes, Notre Dame’s Ara Parseghian and Indiana’s John Pont who gained coaching experience at Miami. For two years, 1949 and 1950, Schembechler was an offensive tackle when Hayes coached at Miami. He then continued his association with Hayes while earning a master’s degree at Ohio State in 1952 and was Hayes’ offensive tackle coach at OSU from 1958 through 1962. “At Miami, we played a multiple offense with emphasis on the option play,” says Schembechler, “and at Michigan we’ll look first at the quarterback to determine just what we’ll do offensively. I like a quarterback who can run and pass. “At Miami, I did a great deal of recruiting personally and plan to do much the same here. I plan to talk to every member of the staff and I’m sure some will be retained,” said Schembechler. Elliot’s staff includes Hank Fonde, 10-year veteran who coordinated the defense; Tony Mason, coordinator of the offense and a Michigan coach for five years; George Mans, offensive end coach for the last three seasons; Bob Shaw, coach of the defensive ends and linebackers who joined the staff a year ago; Frank Maloney, who also joined the staff a year ago and coached the offensive line, and Bill Dodd, freshman coach for three seasons. Dennis Fitzgerald, interior defensive line coach for three seasons, last week was hired by Kentucky’s new coach, John Ray, as defensive coordinator for the Wildcats. Schembechler’s staff at Miami includes defensive coach Jim Young, interior line coach Joe Galat, offensive line coach Jerry Hanlon, offensive backfield coach Chuck Stobart, end coach Larry Smith, freshman coach Gary Moeller and defensive backfield coach Dick Hunter and some of them seem certain to continue their association with Schembechler at Michigan. Miami has a reputation of upsetting Big Ten teams and Schembechler’s 1964 squad edged Northwestern, 28-27, his 1966 team bounced Indiana, 20-10. Named MAC Coach of the Year in 1965 when his Redskins shared the MAC title with Bowling Green, Schembechler also was named Ohio Coach of the Year in 1966 when his team was 9-1 and again shared the MAC crown, with Western Michigan. Schembechler’s Mid-American record is 27-8-1. Schembechler, whose full name is Glenn Edward Schembechler, was a schoolboy all-stater from Barberton, Ohio, when he enrolled at Miami in 1947. In addition to playing football, he was a southpaw pitcher. He earned his BA degree in 1951. After receiving his master’s degree, Schembechler served a two-year stint in the Army and coached the football and baseball teams at Camp Rucker, Ala. His first college coaching assignment was as an assistant at Presbyterian College in 1954. Then he was an assistant at Bowling Green before joining Miami alumnus and former Miami coach Parseghian at Northwestern. He started out at Northwestern as freshman coach in 1956 and became a varsity assistant the following year before joining Hayes at OSU in 1958. Schembechler and his wife, Millie, have three children—Chip, 13, Geoffrey, 10, and Matthew, 9.