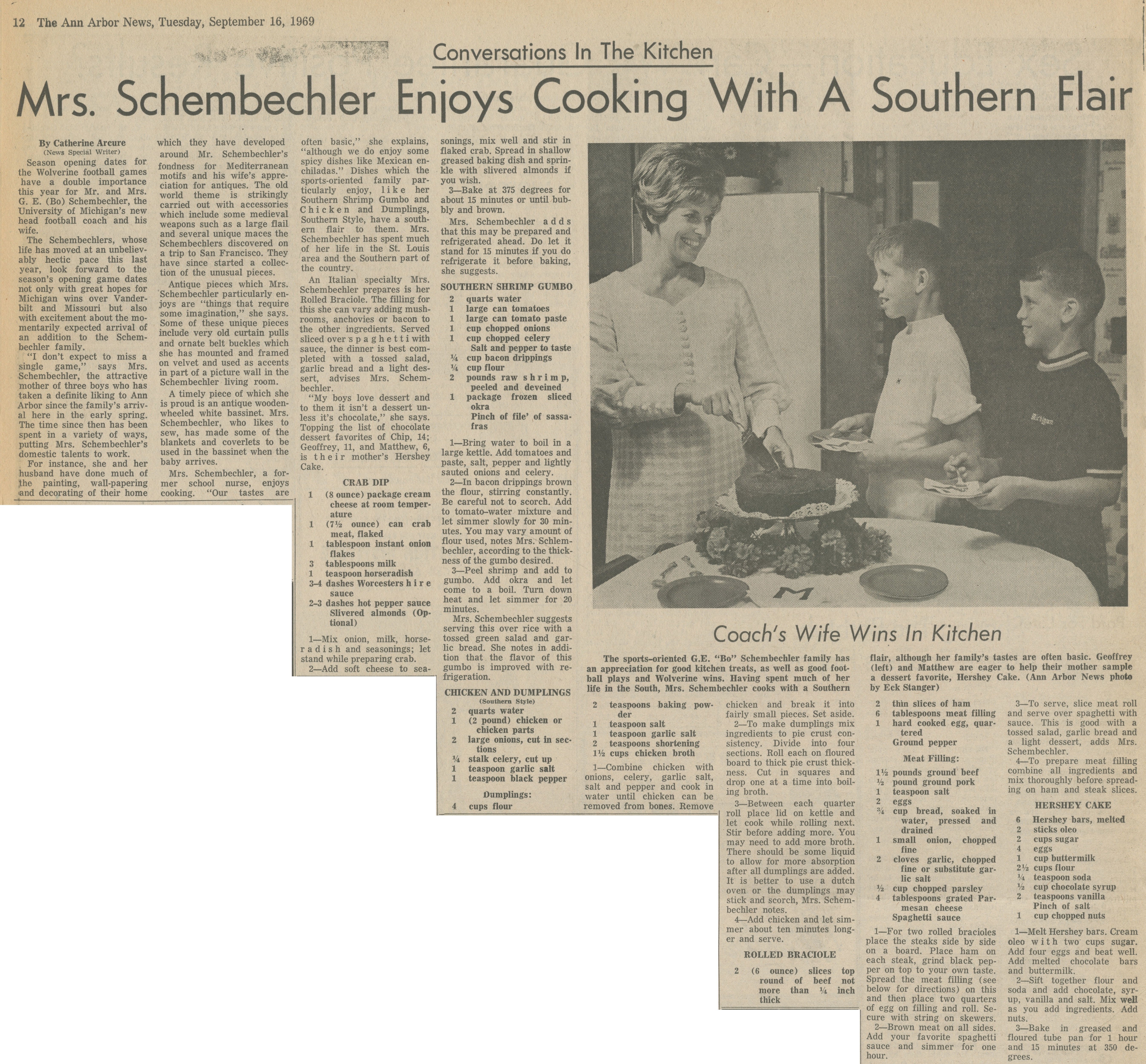 Conversations In The Kitchen

Season opening dates for the Wolverine football games have a double importance this year for Mr. and Mrs. G. E. (Bo) Schembechler, the University of Michigan’s new head football coach and his wife.
The Schembechlers, whose life has moved at an unbelievably hectic pace this last year, look forward to the season’s opening game dates not only with great hopes for Michigan wins over Vanderbilt and Missouri but also with excitement about the momentarily expected arrival of an addition to the Schembechler family.
“I don’t expect to miss a single game,” says Mrs. Schembechler, the attractive mother of three boys who has taken a definite liking to Ann Arbor since the family’s arrival here in the early spring. The time since then has been spent in a variety of ways, putting Mrs. Schembechler’s domestic talents to work.
For instance, she and her husband have done much of the painting, wall-papering and decorating of their home which they have developed around Mr. Schembechler’s fondness of Mediterranean motifs and his wife’s appreciation for antiques. The old world theme is strikingly carried out with accessories which include some medieval weapons such as a large flail and several unique maces the Schembechlers discovered on a trip to San Francisco. They have since started a collection of the unusual pieces.
Antique pieces which Mrs. Schembechler particularly enjoys are “things that require some imagination,” she says. Some of these unique pieces include very old curtain pulls and ornate belt buckles which she has mounted and framed on velvet and used as accents in part of a picture wall in the Schembechler living room.
A timely piece of which she is proud is an antique wooden-wheeled white bassinet. Mrs. Schembechler, who likes to sew, has made some of the blankets and coverlets to be used in the bassinet when the baby arrives.
Mrs. Schembechler, a former school nurse, enjoys cooking. “Our tastes are often basic,” she explains, “although we do enjoy some spicy dishes like Mexican enchiladas.” Dishes which the sports-oriented family particularly enjoy, like her Southern Shrimp Gumbo and Chicken and Dumplings, Southern Style, have a southern flair to them. Mrs. Schembechler has spent much of her life in the St. Louis area and the Southern part of the country.
An Italian specialty Mrs. Schembechler prepares is her Rolled Braciole. The filling for this she can vary adding mushrooms, anchovies or bacon to the other ingredients. Served sliced over spaghetti with sauce, the dinner is best completed with a tossed salad, garlic bread and a light dessert, advises Mrs. Schembechler.
“My boys love dessert and to them it isn’t a dessert unless it’s chocolate,” she says. Topping the list of chocolate dessert favorites of Chip, 14; Geoffrey, 11, and Matthew, 6, is their mother’s Hershey Cake.

1—Mix onion, milk, horseradish and seasonings; let stand while preparing crab
2—Add soft cheese to seasonings, mix well and stir in flaked crab. Spread in shallow greased backing dish and sprinkle with slivered almonds if you wish.
3—Bake at 375 degrees for about 15 minutes or until bubbly and brown.
Mrs. Schembechler adds that this may be prepared and refrigerated ahead. Do let it stand for 15 minutes if you do refrigerate it before baking, she suggests.

1—Bring water to boil in a large kettle. Add tomatoes and paste, salt, pepper and lightly sautéed onions and celery.
2—In bacon drippings brown the flour, stirring constantly. Be careful not to scorch. Add to tomato-water mixture and let simmer slowly for 30 minutes. You may vary amount of flour used, notes Mrs. Schembechler, according to the thickness of the gumbo desired.
3—Peel shrimp and add to gumbo. Add okra and let come to a boil. Turn down heat and let simmer for 20 minutes.
Mrs. Schembechler suggests serving this over rice with a tossed green salad and garlic bread. She notes in addition that the flavor of this gumbo is improved with refrigeration.

1—Combine chicken with onions, celery, garlic salt, salt and pepper and cook in water until chicken can be removed from bones. Remove chicken and break it into fairly small pieces. Set aside.
2—To make dumplings mix ingredients to pie crust consistency. Divide into four sections. Roll each one on floured board to thick pie crust thickness. Cut in squares and drop one at a time into boiling broth.
3—Between each quarter roll place lid on kettle and let cook while rolling next. Stir before adding more. You may need to add more broth. There should be some liquid to allow for more absorption after all dumplings are added. It is better to use a dutch oven or the dumplings may stick and scorch, Mrs. Schembechler notes.
4—Add chicken and let simmer about ten minutes longer and serve.

1—For two rolled bracioles place the steaks side by side on a board. Place ham on each steak, grind black pepper on top to your own taste. Spread the meat filling (see below for directions) on this and then place two quarters of an egg on filling and roll. Secure with string on skewers.
2—Brown meat on all sides. Add your favorite spaghetti sauce and simmer for one hour.
3—To serve, slice meat roll and serve over spaghetti with sauce. This is good with a tossed salad, garlic bread and a light dessert, adds Mrs. Schembechler.
4—To prepare meat filling combine all ingredients and mix thoroughly before spreading on ham and steak slices.

PHOTO CAPTION: Coach’s Wife Wins In Kitchen: The sports-oriented G. E. “Bo” Schembechler family has an appreciation for good kitchen treats, as well as good football plays and Wolverine wins. Having spent much of her life in the South, Mrs. Schembechler cooks with a Southern flair, although her family’s tastes are often basic. Geoffrey (left) and Matthew are eager to help their mother sample a dessert favorite, Hershey Cake. (Ann Arbor News photo by Eck Stanger)