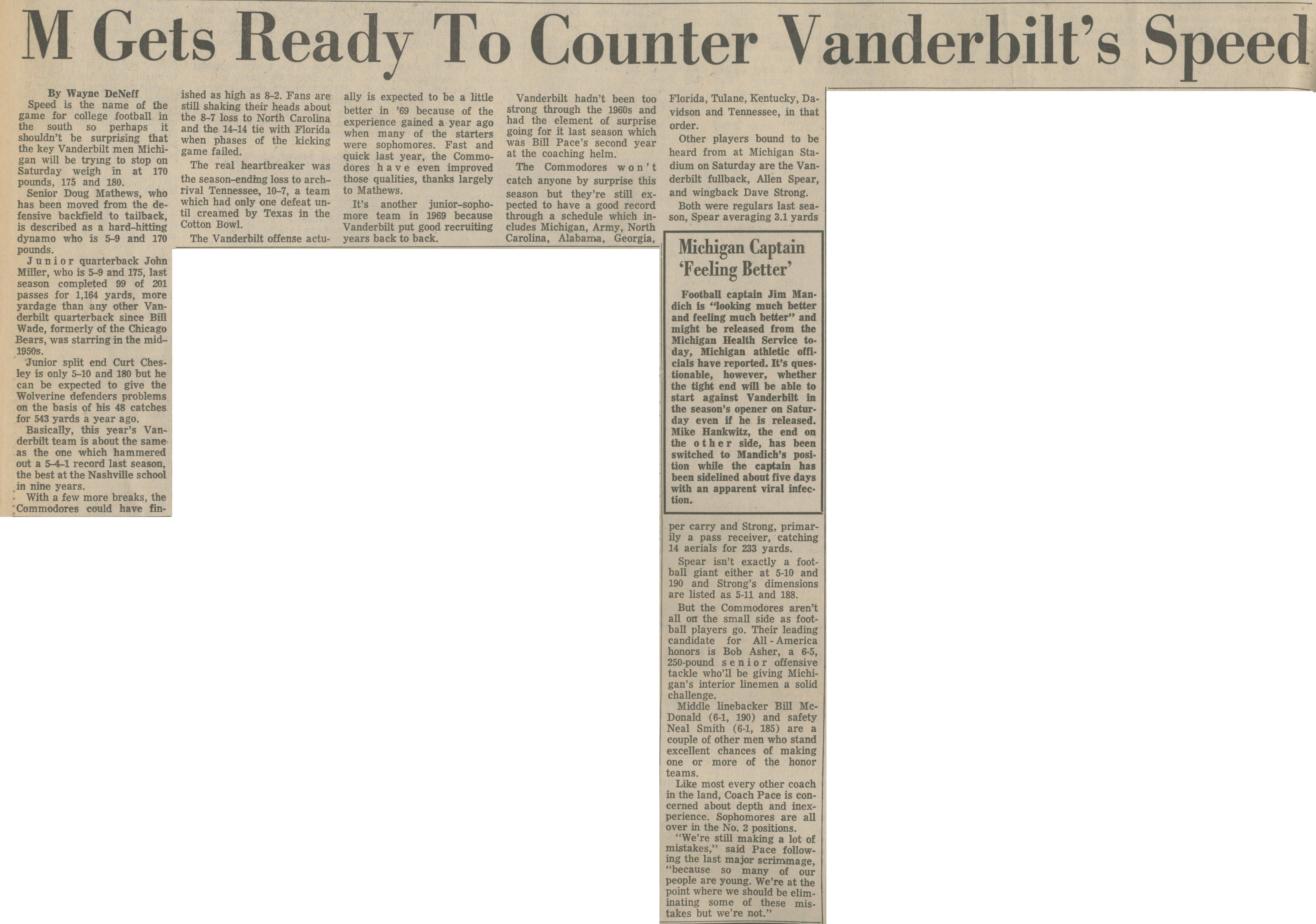 M GETS READY TO COUNTER VANDERBILT’S SPEED
By Wayne DeNeff

Speed is the name of the game for college football in the south so perhaps it shouldn’t be surprising that the key Vanderbilt men Michigan will be trying to stop on Saturday weigh in at 170 pounds, 175 and 180.
Senior Doug Mathews, who has been moved from the defensive backfield to tailback, is described as a hard-hitting dynamo who is 5-9 and 170 pounds.
Junior quarterback John Miller, who is 5-9 and 175, last season completed 99 of 201 passes for 1,164 yards, more yardage than any other Vanderbilt quarterback since Bill Wade, formerly of the Chicago Bears, was starring in the mid-1950s.
Junior split end Curt Chesley is only 5-10 and 180 but he can be expected to give the Wolverine defenders problems on the basis of his 48 catches for 543 yards a year ago.
Basically, this year’s Vanderbilt team is about the same as the one which hammered out a 5-4-1 record last season, the best at the Nashville school in nine years.
With a few more breaks, the Commodores could have finished as high as 8-2. Fans are still shaking their heads about the 8-7 loss to North Carolina and the 14-14 tie with Florida when phases of the kicking game failed.
The real heartbreaker was the season-ending loss to arch-rival Tennessee, 10-7, a team which had only one defeat until creamed by Texas in the Cotton Bowl.
The Vanderbilt offense actually is expected to be a little better in ’69 because of the experience gained a year ago when many of the starters were sophomores. Fast and quick last year, the Commodores have even improved those qualities, thanks largely to Mathews.
It’s another junior-sophomore team in 1969 because Vanderbilt put good recruiting years back to back.
Vanderbilt hadn’t been too strong through the 1960s and had the element of surprise going for it last season which was Bill Pace’s second year at the coaching helm.
The Commodores won’t catch anyone by surprise this season but they’re still expected to have a good record through a schedule which includes Michigan, Army, North Carolina, Alabama, Georgia, Florida, Tulane, Kentucky, Davidson and Tennessee, in that order.
Other players bound to be heard from at Michigan Stadium on Saturday are the Vanderbilt fullback, Allen Spear, and wingback Dave Strong.
Both were regulars last season, Spear averaging 3.1 yards per carry and Strong, primarily a pass receiver, catching 14 aerials for 233 yards.
Spear isn’t exactly a football giant either at 5-10 and 190 and Strong’s dimensions are listed as 5-11 and 188.
But the Commodores aren’t all on the small side as football players go. Their leading candidate for All-America honors is Bob Asher, a 6-5, 250-pound senior offensive tackle who’ll be giving Michigan’s interior linemen a solid challenge.
Middle linebacker Bill McDonald (6-1, 190) and safety Neal Smith (6-1, 185) are a couple of other men who stand excellent chances of making one or more of the honor teams.
Like most every other coach in the land, Coach Pace is concerned about depth and inexperience. Sophomores are all over in the No. 2 positions.
“We’re still making a lot of mistakes,” said Pace following the last major scrimmage, “because so many of our people are young. We’re at the point where we should be eliminating some of these mistakes but we’re not.”

BOX TEXT: Michigan Captain ‘Feeling Better’: Football captain Jim Mandich is “looking much better” and might be released from the Michigan Health Service today, Michigan athletic officials have reported. It’s questionable, however, whether the tight end will be able to start against Vanderbilt in the season’s opener on Saturday even if he is released. Mike Hankwitz, the end on the other side, has been switched to Mandich’s position while the captain has been sidelined about five days with an apparent viral infection.