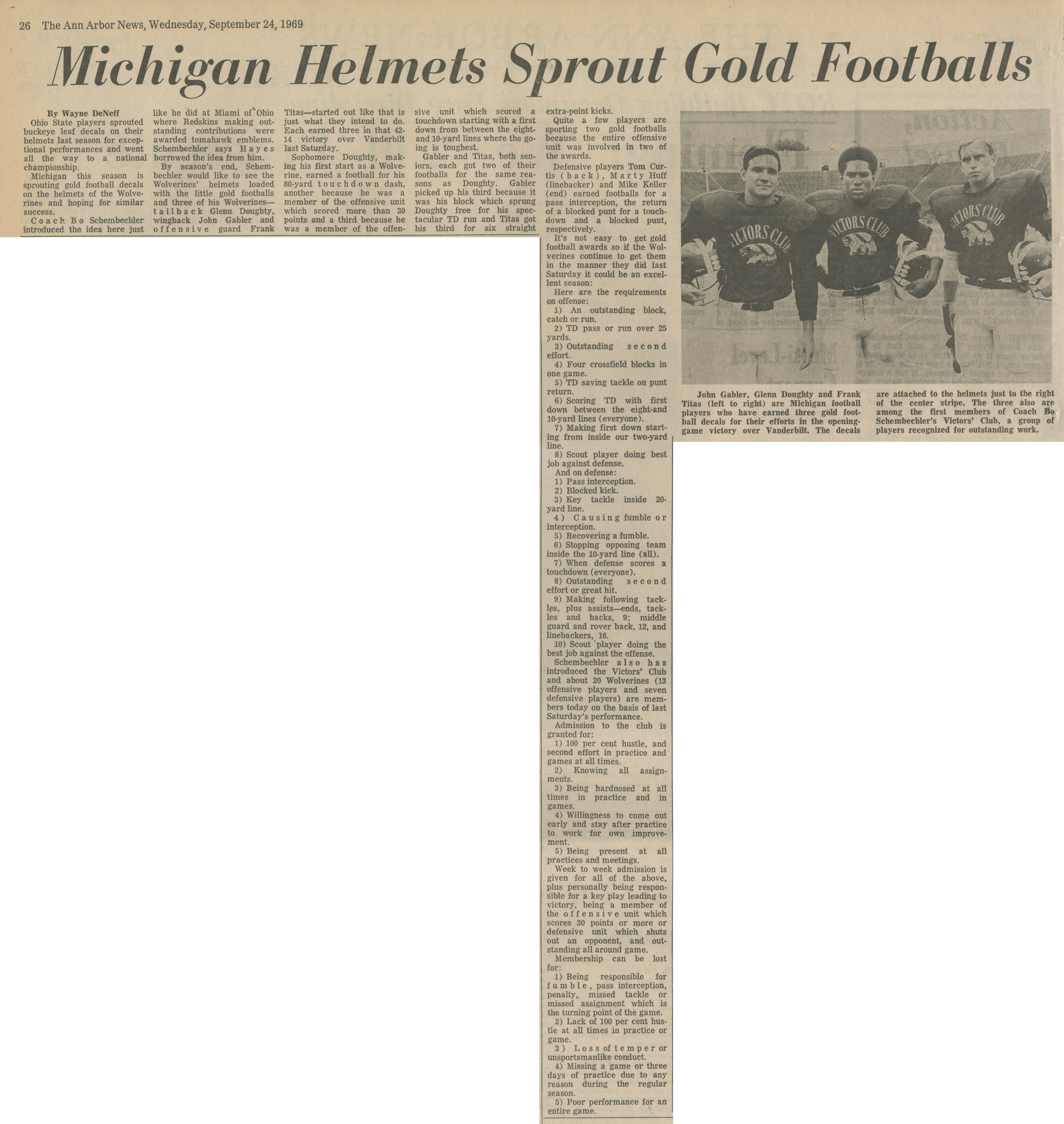 Ohio State players sprouted buckeye leaf decals on their helmets last season for exceptional performances and went all the way to a national championship.
Michigan this season is sprouting gold football decals on the helmets of the Wolverines and hoping for similar success.
Coach Bo Schembechler introduced the idea here just like he did at Miami of Ohio where Redskins making outstanding contributions were awarded tomahawk emblems. Schembechler says Hayes borrowed the idea from him.
By season’s end, Schembechler would like to see the Wolverines’ helmets loaded with the little gold footballs and three of his Wolverines—tailback Glenn Doughty, wingback John Gabler and offensive guard Frank Titas—started out like that is just what they intend to do. Each earned three in that 42-14 victory over Vanderbilt last Saturday.
Sophomore Doughty, making his first start as a Wolverine, earned a football for his 80-yard touchdown dash, another because he was a member of the offensive unit which scored more than 30 points and a third because he was a member of the offensive unit which scored a touchdown starting with a first down from between the eight and 10-yard lines where the going is toughest.
Gabler and Titas, both seniors, each got two of their footballs for the same reasons as Doughty. Gabler picked up his third because it was his block which sprung Doughty free for his spectacular TD run and Titas got his third for six straight extra-point kicks,
Quite a few players are sporting two gold footballs because the entire offensive unit was involved in two of the awards.
Defensive players Tom Curtis (back), Marty Huff (linebacker) and Mike Keller (end) earned footballs for a pass interception, the return of a blocked punt for a touchdown and a blocked punt, respectively.
It’s not easy to get gold football awards so if the Wolverines continue to get them in the manner they did last Saturday it could be an excellent season:
Here are the requirements on offense:
1) An outstanding block, catch or run.
2) TD pass or run over 25 yards.
3) Outstanding second effort.
4) Four crossfield blocks in one game.
5) TD saving tackle on punt return.
6) Scoring TD with first down between the eight-and-10-yard lines (everyone).
7) Making first down starting from inside our two-yard line.
8) Scout player doing best job against defense.
And on defense:
1) Pass interception.
2) Blocked kick.
3) Key tackle inside 20-yard line.
4) Causing fumble or interception.
5) Recovering a fumble.
6) Stopping opposing team inside the 10-yard line (all).
7) When defense scores a touchdown (everyone).
8) Outstanding second effort or great hit.
9) Making following tackles, plus assists—ends, tackles and backs, 9; middle guard and rover back, 12, and linebackers, 16.
10) Scout player doing the best job against the offense.
Schembechler also has introduced the Victors’ Club and about 20 Wolverines (13 offensive players and seven defensive players) are members today on the basis of last Saturday’s performance.
Admission to the club is granted for:
1) 100 per cent hustle, and second effort in practice and games at all times.
2) Knowing all assignments.
3) Being hardnosed at all times in practice and in games.
4) Willingness to come out early and stay after practice to work for own improvement.
5) Being present at all practices and meetings.
Week to week admission is given for all of the above, plus personally being responsible for a key play leading to victory, being a member of the offensive unit which scores 30 points or more or defensive unit which shuts out an opponent, and outstanding all around game.
Membership can be lost for:
1) Being responsible for fumble, pass interception, penalty, missed tackle or missed assignment which is the turning point of the game.
2) Lack of 100 per cent hustle at all times in practice or game.
3) Loss of temper or unsportsmanlike conduct.
4) Missing a game or three days of practice due to any reason during the regular season.
5) Poor performance for an entire game.

PHOTO CAPTION: John Gabler, Glenn Doughty and Frank Titas (left to right) are Michigan football players who have earned three gold football decals for their efforts in the opening-game victory over Vanderbilt. The decals are attached to the helmets just to the right of the center stripe. The three also are among the first members of Coach Bo Schembechler’s Victors’ Club, a group of players recognized for outstanding work.