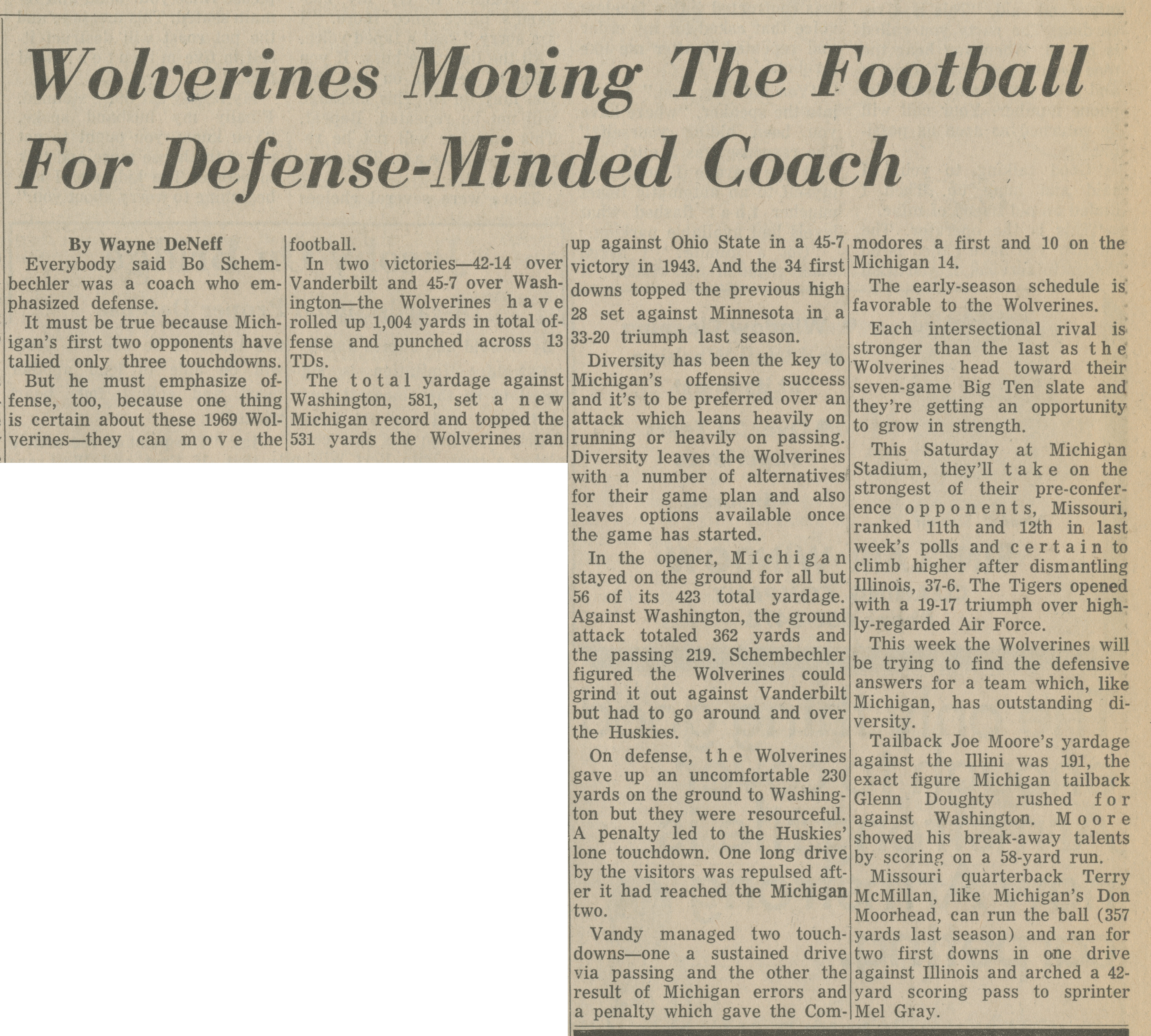 Everybody said Bo Schembechler was a coach who emphasized defense.

It must be true because Michigan’s first two opponents have tallied only three touchdowns.

But he must emphasize offense, too, because one thing is certain about these 1969 Wolverines—they can move the football.

In two victories—42-14 over Vanderbilt and 45-7 over Washington—the Wolverines have rolled up 1,004 yards in total offense and punched across 13 TDs.

The total yardage against Washington, 581, set a new Michigan record and topped the 531 yards the Wolverines ran up against Ohio State in a 45-7 victory in 1943. And the 34 first downs topped the previous high 28 set against Minnesota in a 33-20 triumph last season.

Diversity has been the key to Michigan’s offensive success and it’s to be preferred over an attack which leans heavily on running or heavily on passing. Diversity leaves the Wolverines with a number of alternatives for their game plan and also leaves options available once the game has started.

In the opener, Michigan stayed on the ground for all but 56 of its 423 total yardage. Against Washington, the ground attack totaled 362 yards and the passing 219. Schembechler figured the Wolverines could grind it out against Vanderbilt but had to go around and over the Huskies.

On defense, the Wolverines gave up an uncomfortable 230 yards on the ground to Washington but they were resourceful. A penalty led to the Huskies’ lone touchdown. One long drive by the visitors was repulsed after it had reached the Michigan two.

Vandy managed two touchdowns—one a sustained drive via passing and the other the result of Michigan errors and a penalty which gave the Commodores a first and 10 on the Michigan 14.

The early-season schedule is favorable to the Wolverines.

Each intersectional rival is stronger than the last as the Wolverines head toward their seven-game Big Ten slate and they’re getting an opportunity to grow in strength.

This Saturday at Michigan Stadium, they’ll take on the strongest of their pre-conference opponents, Missouri, ranked 11th and 12th in last week’s polls and certain to climb higher after dismantling Illinois, 37-6. The Tigers opened with a 19-17 triumph over highly-regarded Air Force.

This week the Wolverines will be trying to find the defensive answers for a team which, like Michigan, has outstanding diversity.

Tailback Joe Moore’s yardage against the Illini was 191, the exact figure Michigan tailback Glenn Doughty rushed for against Washington. Moore showed his break-away talents by scoring on a 58-yard run.

Missouri quarterback Terry McMillan, like Michigan’s Don Moorhead, can run the ball (357 yards last season) and ran for two first downs in one drive against Illinois and arched a 42-yard scoring pass to sprinter Mel Gray.