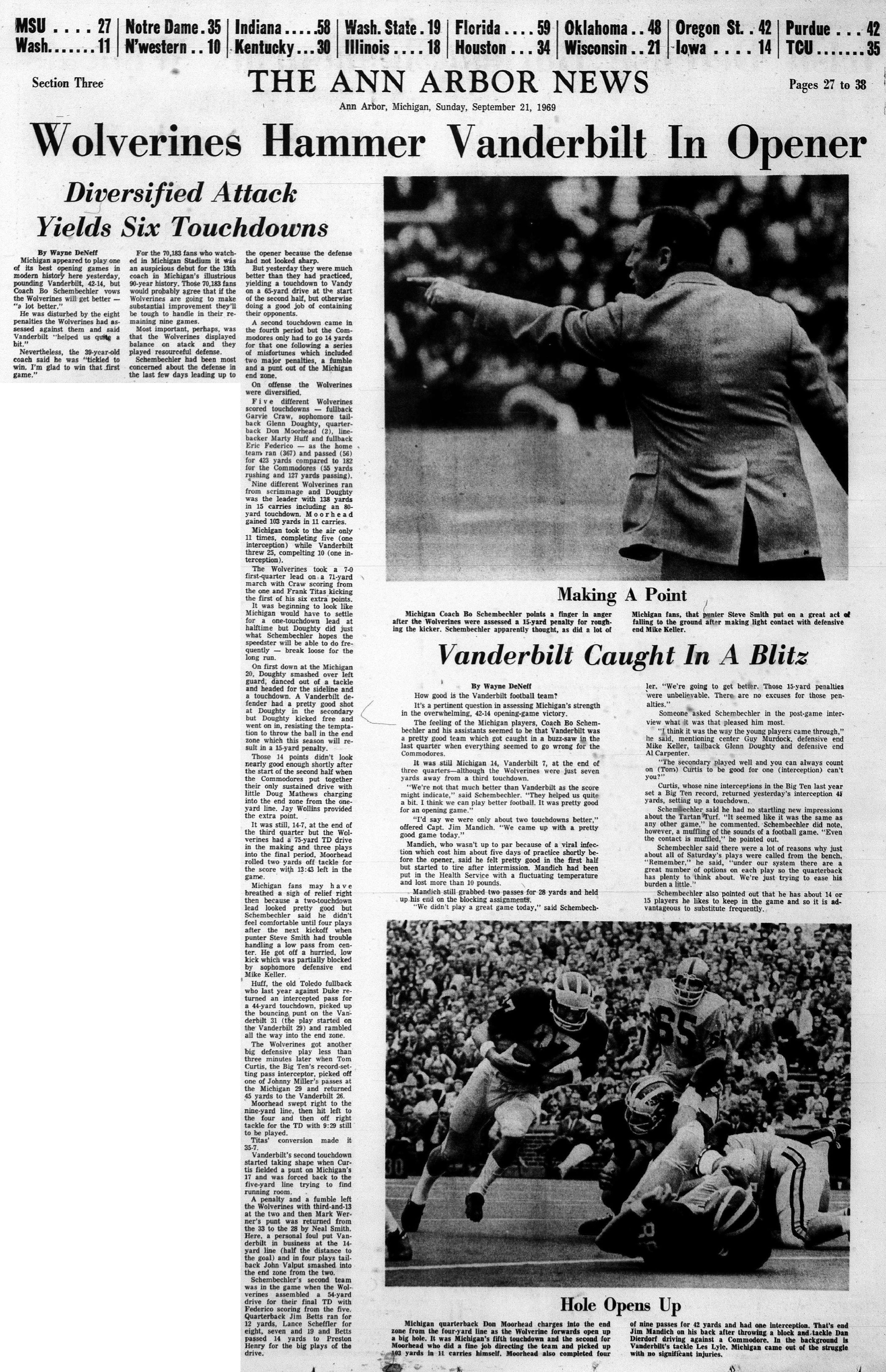 Michigan appeared to play one of its best opening games in modern history here yesterday, pounding Vanderbilt, 42-14, but Coach Bo Schembechler vows the Wolverines will get better—“a lot better.”
He was disturbed by the eight penalties the Wolverines had assessed against them and said Vanderbilt “helped us quite a bit.”
Nevertheless, the 39-year-old coach said he was “tickled to win. I’m glad to win that first game.”
For the 70,183 fans who watched in Michigan Stadium it was an auspicious debut for the 13th coach in Michigan’s illustrious 90-year history. Those 70,183 fans would probably agree that if the Wolverines are going to make substantial improvement they’ll be tough to handle in their remaining nine games.
Most important, perhaps, was that the Wolverines displayed balance on attack and they played resourceful defense.
Schembechler had been most concerned about the defense in the last few days leading up to the opener because the defense had not looked sharp.
But yesterday they were much better than they had practiced, yielding a touchdown to Vandy on a 65-yard drive at the start of the second half, but otherwise doing a good job of containing their opponents.
A second touchdown came in the fourth period but the Commodores only had to go 14 yards for that one following a series of misfortunes which included two major penalties, a fumble and a punt out of the Michigan end zone.
On offense the Wolverines were diversified.
Five different Wolverines scored touchdowns—fullback Garvie Craw, sophomore tailback Glenn Doughty, quarterback Don Moorhead (2), linebacker Marty Huff and fullback Eric Federico —as the home team ran (367) and passed (56) for 423 yards compared to 182 for the Commodores (55 yards rushing and 127 yards passing).
Nine different Wolverines ran from scrimmage and Doughty was the leader with 138 yards in 15 carries including an 80-yard touchdown. Moorhead gained 103 yards in 11 carries.
Michigan took to the air only 11 times, completing five (one interception) while Vanderbilt threw 25, completing 10 (one interception).
The Wolverines took a 7-0 first-quarter lead on a 71-yard march with Craw scoring from the one and Frank Titas kicking the first of his six extra points.
It was beginning to look like Michigan would have to settle for a one-touchdown lead at halftime but Doughty did just what Schembechler hopes the speedster will be able to do frequently—break loose for the long run.
On first down at the Michigan 20, Doughty smashed over left guard, danced out of a tackle and headed for the sideline and a touchdown. A Vanderbilt defender had a pretty good shot at Doughty in the secondary but Doughty kicked free and went on in, resisting the temptation to throw the ball in the end zone which this season will result in a 15-yard penalty.
Those 14 points didn’t look nearly good enough shortly after the start of the second half when the Commodores put together their only sustained drive with little Doug Mathews charging into the end zone from the one-yard line. Jay Wollins provided the extra point.
It was still 14-7 at the end of the third quarter but the Wolverines had a 75-yard TD drive in the making and three plays into the final period, Moorhead rolled two yards off tackle for the score with 13:43 left in the game.
Michigan fans may have breathed a sigh of relief right then because a two-touchdown lead looked pretty good but Schembechler said he didn’t feel comfortable until four plays after the next kickoff when punter Steve Smith had trouble handling a low pass from center. He got off a hurried, low kick which was partially blocked by sophomore defensive end Mike Keller.
Huff, the old Toledo fullback who last year against Duke returned an intercepted pass for a 44-yard touchdown, picked up the bouncing punt on the Vanderbilt 31 (the play started on the Vanderbilt 29) and rambled all the way into the end zone.
The Wolverines got another big defensive play less than three minutes later when Tom Curtis, the Big Ten’s record-setting pass interceptor, picked off one of Johnny Miller’s passes at the Michigan 29 and returned 45 yards to the Vanderbilt 26.
Moorhead swept right to the nine-yard line, then hit left to the four and then off right tackle for the TD with 9:29 still to be played.
Titas’ conversion made it 35-7.
Vanderbilt’s second touchdown started taking shape when Curtis fielded a punt on Michigan’s 17 and was forced back to the five-yard line trying to find running room.
A penalty and a fumble left the Wolverines with third-and-13 at the two and then Mark Werner’s punt was returned from the 33 to the 28 by Neal Smith. Here, a personal foul put Vanderbilt in business at the 14-yard line (half the distance to the goal) and in four plays tailback John Valput smashed into the end zone from the two.
Schembechler’s second team was in the game when the Wolverines assembled a 54-yard drive for their final TD with Federico scoring from the five. Quarterback Jim Betts ran for 12 yards, Lance Scheffler for eight, seven and 19 and Betts passed 14 yards to Preston Henry for the big plays of the drive.

PHOTO CAPTION: Hole Opens Up: Michigan quarterback Don Moorhead charges into the end zone from the four-yard line as the Wolverine forwards open up a big hole. It was Michigan’s fifth touchdown and the second for Moorhead who did a fine job directing the team and picked up 103 yards in 11 carries himself. Moorhead also completed four of nine passes for 42 yards and had one interception. That’s end Jim Mandich on his back after throwing a block and tackle Dan Dierdorf driving against a Commodore. In the background is Vanderbilt’s tackle Les Lyle. Michigan came out of the struggle with no significant injuries.

VANDERBILT CAUGHT IN A BLITZ
By Wayne DeNeff
How good is the Vanderbilt football team?
It’s a pertinent question in assessing Michigan’s strength in the overwhelming, 42-14 opening-game victory.
The feeling of the Michigan players, Coach Bo Schembechler and his assistants seemed to be that Vanderbilt was a pretty good team which got caught in a buzz-saw in the last quarter when everything seemed to go wrong for the Commodores.
It was still Michigan 14, Vanderbilt 7, at the end of three quarters—although the Wolverines were just seven yards away from a third touchdown.
“We’re not that much better than Vanderbilt as the score might indicate,” said Schembechler. “They helped us quite a bit. I think we can play better football. It was pretty good for an opening game.”
“I’d say we were only about two touchdowns better,” offered Capt. Jim Mandich. “We came up with a pretty good game today.”
Mandich, who wasn’t up to par because of a viral infection which cost him about five days of practice shortly before the opener, said he felt pretty good in the first half but started to tire after intermission. Mandich had been put in the Health Service with a fluctuating temperature and lost more than 10 pounds.
Mandich still grabbed two passes for 28 yards and held up his end on the blocking assignments.
“We didn’t play a great game today,” said Schembechler. “We’re going to get better. Those 15-yard penalties were unbelievable. There are no excuses for those penalties.”
Someone asked Schembechler in the post-game interview what it was that pleased him most.
“I think it was the way the young players came through,” he said, mentioning center Guy Murdock, defensive end Mike Keller, tailback Glenn Doughty and defensive end Al Carpenter.
“The secondary played well and you can always count on (Tom) Curtis to be good for one (interception) can’t you?”
Curtis, whose nine interceptions in the Big Ten last year set a Big Ten record, returned yesterday’s interception 45 yards, setting up a touchdown.
Schembechler said he had no startling new impressions about the Tartan Turf. “It seemed like it was the same as any other game,” he commented. Schembechler did note, however, a muffling of the sounds of a football game. “Even the contact is muffled,” he pointed out.
Schembechler said there were a lot of reasons why just about all of Saturday’s plays were called from the bench. “Remember,” he said, “under our system there are a great number of options on each play so the quarterback has plenty to think about. We’re just trying to ease his burden a little.”
Schembechler also pointed out that he has about 14 or 15 players he likes to keep in the game and so it is advantageous to substitute frequently.

PHOTO CAPTION: Making A Point: Michigan Coach Bo Schembechler points a finger in anger after the wolverines were assessed a 15-yard penalty for roughing the kicker. Schembechler apparently thought, as did a lot of Michigan fans, that punter Steve Smith put on a great act of falling to the ground after making light contact with defensive end Mike Keller.