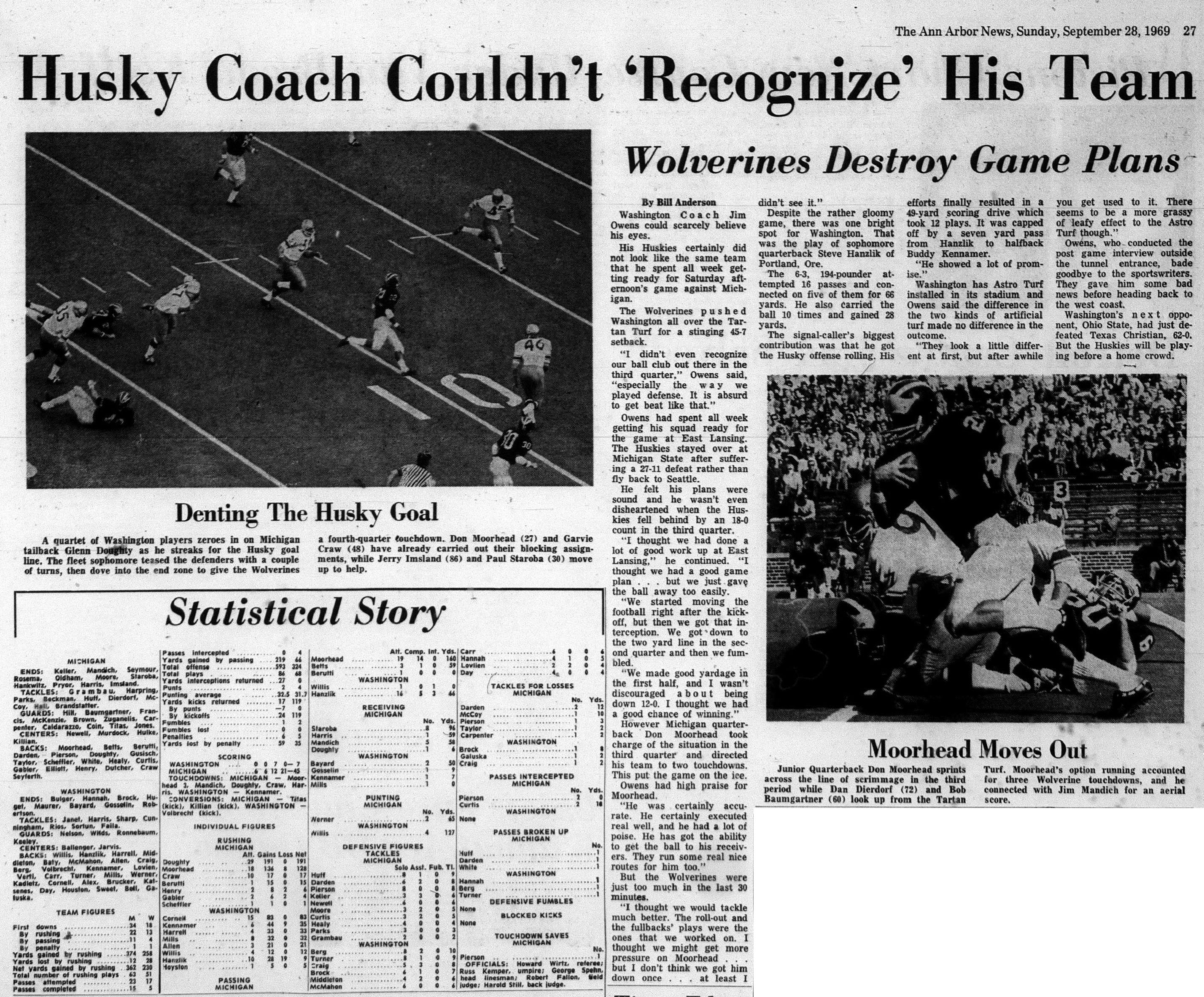 Washington Coach Jim Owens could scarcely believe his eyes.
His Huskies certainly did not look like the same team that he spent all week getting ready for Saturday afternoon’s game against Michigan.
The Wolverines pushed Washington all over the Tartan Turf for a stinging 45-7 setback.
“I didn’t even recognize our ball club out there in the third quarter,” Owens said, “especially the way we played defense. It is absurd to get beat like that.”
Owens had spent all week getting his squad ready for the game at East Lansing. The Huskies stayed over at Michigan State after suffering a 27-11 defeat rather than fly back to Seattle.
He felt his plans were sound and he wasn’t even disheartened when the Huskies fell behind by an 18-0 count in the third quarter.
“I thought we had done a lot of good work up at East Lansing,” he continued. “I thought we had a good game plan…but we just gave the ball away too easily.
“We started moving the football right after the kickoff, but then we got that interception. We got down to the two yard line in the second quarter and then we fumbled.
“We made good yardage in the first half, and I wasn’t discouraged about being down 12-0. I thought we had a good chance of winning.”
However Michigan quarterback Don Moorhead took charge of the situation in the third quarter and directed his team to two touchdowns. This put the game on the ice.
Owens had high praise for Moorhead.
“He was certainly accurate. He certainly executed real well, and he had a lot of poise. He has got the ability to get the ball to his receivers. They run some real nice routes for him too.”
But the Wolverines were just too much in the last 30 minutes.
“I thought we would tackle much better. The roll-out and the fullbacks’ plays were the ones that we worked on. I thought we might get more pressure on Moorhead…but I don’t think we got him down once…at least I didn’t see it.”
Despite the rather gloomy game, there was one bright spot for Washington. That was the play of sophomore quarterback Steve Hanzlik of Portland, Ore.
The 6-3, 194-pounder attempted 16 passes and connected on five of them for 66 yards. He also carried the ball 10 times and gained 28 yards.
The signal-caller’s biggest contribution was that he got the Husky offense rolling. His efforts finally resulted in a 49-yard scoring drive which took 12 plays. It was capped off by a seven yard pass from Hanzlik to halfback Buddy Kennamer.
“He showed a lot of promise.”
Washington has Astro Turf installed in its stadium and Owens said the difference in the two kinds of artificial turf made no difference in the outcome.
“They look a little different at first, but after awhile you get used to it. There seems to be a more grassy or leafy effect to the Astro Turf though.”
Owens, who conducted the post game interview outside the tunnel entrance, bade goodbye to the sportswriters. They gave him some bad news before heading back to the west coast.
Washington’s next opponent, Ohio State, had just defeated Texas Christian, 62-0. But the Huskies will be playing before a home crowd.

PHOTO CAPTION 1: Denting The Husky Goal: A quartet of Washington players zeroes in on Michigan tailback Glenn Doughty as he streaks for the Husky goal line. The fleet sophomore teased the defenders with a couple of turns, then dove into the end zone to give the Wolverines a fourth-quarter touchdown. Don Moorhead (27) and Garvie Craw (48) have already carried out their blocking assignments, while Jerry Imsland (86) and Paul Staroba (30) move up to help.

PHOTO CAPTION 2: Moorhead Moves Out: Junior Quarterback Don Moorhead sprints across the line of scrimmage in the third period while Dan Dierdorf (72) and Bob Baumgartner (60) look up from the Tartan Turf. Moorhead’s option running accounted for three Wolverine touchdowns, and he connected with Jim Mandich for an aerial score.