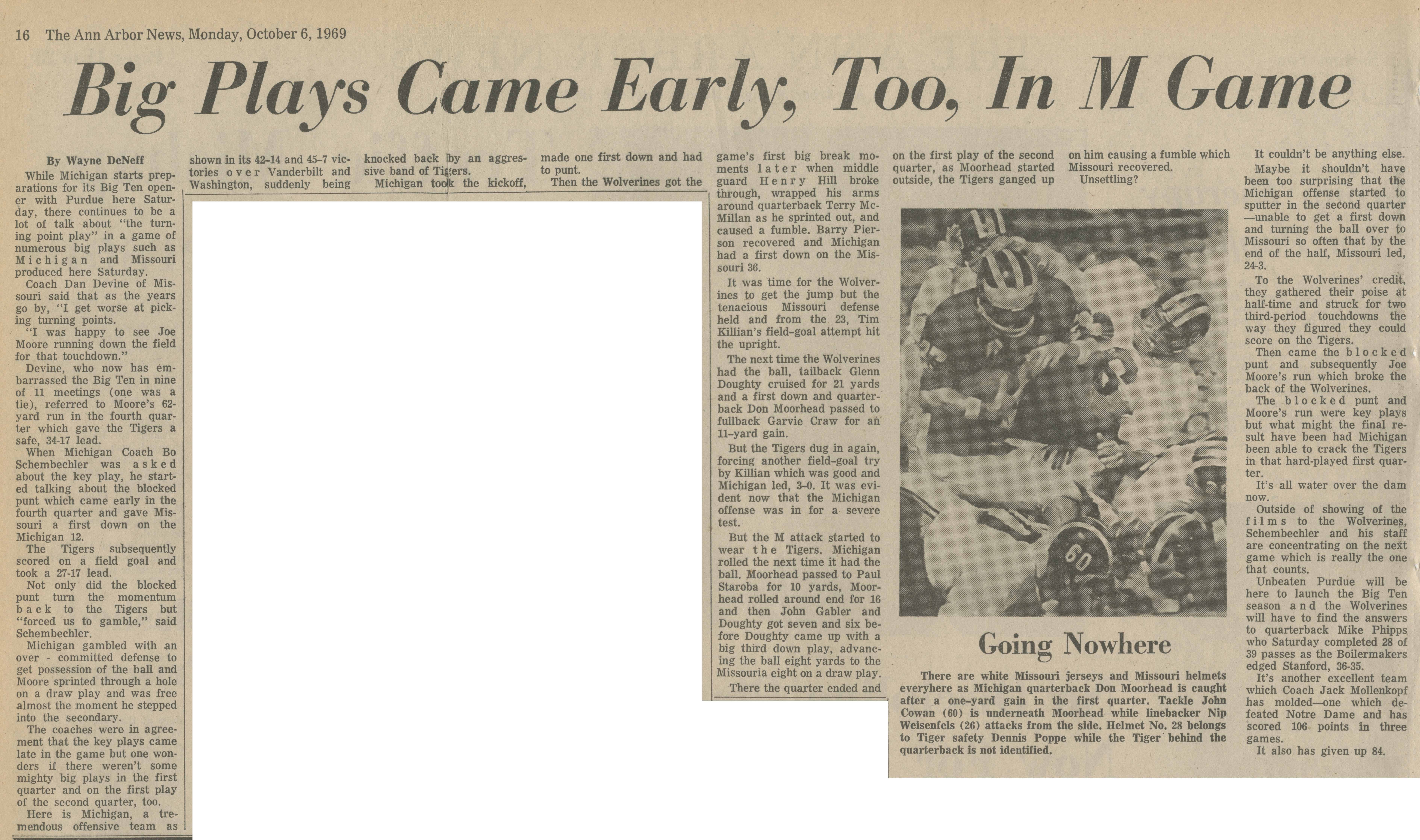 While Michigan starts preparations for its Big Ten opener with Purdue here Saturday, there continues to be a lot of talk about “the turning point play” in a game of numerous big plays such as Michigan and Missouri produced here Saturday.
Coach Dan Devine of Missouri said that as the years go by, “I get worse at picking turning points.
“I was happy to see Joe Moore running down the field for that touchdown.”
Devine, who now has embarrassed the Big Ten in nine of 11 meetings (one was a tie), referred to Moore’s 62-yard run in the fourth quarter which gave the Tiger a safe, 34-17 lead.
When Michigan Coach Bo Schembechler was asked about the key play, he started talking about the blocked punt which came early in the fourth quarter and gave Missouri a first down on the Michigan 12.
The Tigers subsequently scored on a field goal and took a 27-17 lead.
Not only did the blocked punt turn the momentum back to the Tigers but “forced us to gamble,” said Schembechler.
Michigan gambled with an over-committed defense to get possession of the ball and Moore sprinted through a hole on a draw play and was free almost the moment he stepped into the secondary.
The coaches were in agreement that the key plays came late in the game but one wonders if there weren’t some mighty big plays in the first quarter and on the first play of the second quarter, too.
Here is Michigan, a tremendous offensive team as shown in its 42-14 and 45-7 victories over Vanderbilt and Washington, suddenly being knocked back by an aggressive band of Tigers.
Michigan took the kickoff, made one first down and had to punt.
Then the Wolverines got the game’s first big break moments later when middle guard Henry Hill broke through, wrapped his arms around quarterback Terry McMillan as he sprinted out, and caused a fumble. Barry Pierson recovered and Michigan had a first down on the Missouri 36.
It was time for the Wolverines to get the jump but the tenacious Missouri defense held and from the 23, Tim Killian’s field-goal attempt hit the upright.
The next time the Wolverines had the ball, tailback Glenn Doughty cruised for 21 yards and a first down and quarterback Don Moorhead passed to fullback Garvie Craw for an 11-yard gain.
But the Tigers dug in again, forcing another field-goal try by Killian which was good and Michigan led, 3-0. It was evident now that the Michigan offense was in for a severe test.
But the M attack started to wear the Tigers. Michigan rolled the next time it had the ball. Moorhead passed to Paul Staroba for 10 yards, Moorhead rolled around end for 16 and then John Gabler and Doughty got seven and six before Doughty came up with a big third down play, advancing the ball eight yards to the Missouri eight on a draw play.
There the quarter ended and on the first play of the second quarter, as Moorhead started outside, the Tigers ganged up on him causing a fumble which Missouri recovered.
Unsettling?
It couldn’t be anything else. Maybe it shouldn’t have been too surprising that the Michigan offense started to sputter in the second quarter—unable to get a first down and turning the ball over to Missouri so often that by the end of the half, Missouri led, 24-3.
To the Wolverines credit, they gathered their poise at half-time and struck for two third-period touchdowns the way they figured they could score on the Tigers.
Then came the blocked punt and subsequently Joe Moore’s run which broke the back of the Wolverines.
The blocked punt and Moore’s run were key plays but what might the final result have been had Michigan been able to crack the Tigers in that hard-played first quarter.
It’s all water over the dam now.
Outside of showing of the films to the Wolverines, Schembechler and his staff are concentrating on the next game which is really the one that counts.
Unbeaten Purdue will be here to launch the Big Ten season and the Wolverines will have to find the answers to quarterback Mike Phipps who Saturday completed 28 or 39 passes as the Boilermakers edged Stanford, 36-35.
It’s another excellent team which Coach Jack Mollenkopf has molded—one which defeated Notre Dame and has scored 106 points in three games.
It also has given up 84.

PHOTO CAPTION: Going Nowhere: There are white Missouri jerseys and Missouri helmets everywhere as Michigan quarterback Don Moorhead is caught after a one-yard gain in the first quarter. Tackle John Cowan (60) is underneath Moorhead while linebacker Nip Weisenfels (26) attacks from the side. Helmet No. 28 belongs to Tiger safety Dennis Poppe while the Tiger behind the quarterback is not identified.