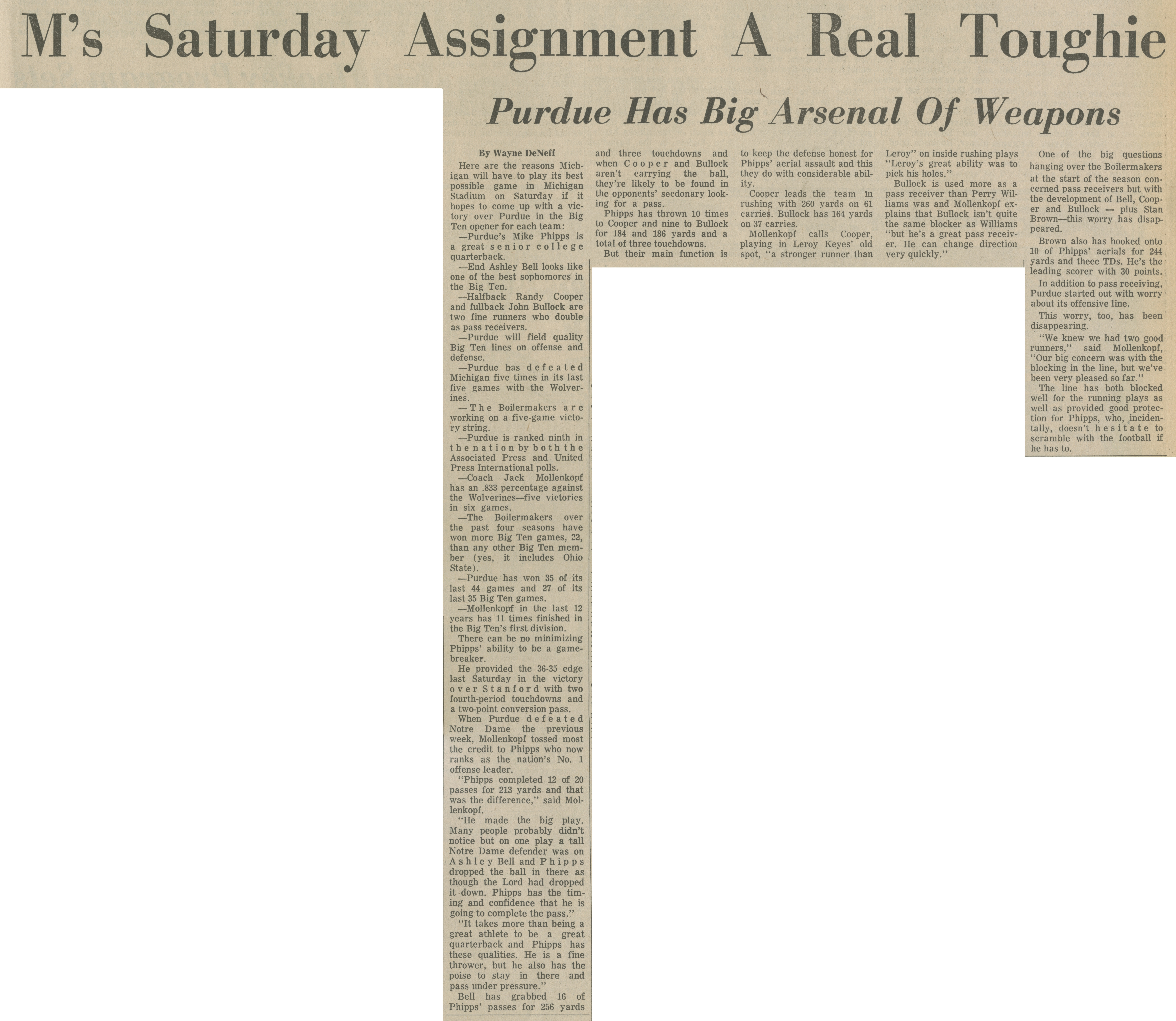 Here are the reasons Michigan will have to play its best possible game in Michigan Stadium on Saturday if it hopes to come up with a victory over Purdue in the Big ten opener for each team:
-Purdue’s Mike Phipps is a great senior college quarterback.
-End Ashley Bell looks like one of the best sophomores in the Big Ten.
-Halfback Randy Cooper and fullback John Bullock are two fine runners who double as pass receivers.
-Purdue will field quality Big Ten lines on offense and defense.
-Purdue has defeated Michigan five times in its last five games with the Wolverines.
-The Boilermakers are working on a five-game victory string.
-Purdue is ranked ninth in the nation by both the Associated Press and United Press International polls.
-Coach Jack Mollenkopf has an .833 percentage against the Wolverines—five victories in six games.
-The Boilermakers over the past four seasons have won more Big Ten games, 22, than any other Big Ten member (yes, it includes Ohio State).
-Purdue has won 35 of its last 44 games and 27 of its last 35 Big Ten games.
-Molleknkopf in the last 12 years has 11 times finished in the Big Ten’s first division.
There can be no minimizing Phipps’ ability to be a game-breaker.
He provided the 36-35 edge last Saturday in the victory over Stanford with two fourth-period touchdowns and a two-point conversation pass.
When Purdue defeated Notre Dame the previous week, Mollenkopf tossed most of the credit to Phipps who now ranks as the nation’s No. 1 offense leader.
“Phipps completed 12 of 20 passes for 213 yards and that was the difference,” said Mollenkopf.
“He made the big play. Many people probably didn’t notice but on one play a tall Notre Dame defender was on Ashley Bell and Phipps dropped the ball in there as though the Lord had dropped it down. Phipps has the timing and confidence that he is going to complete the pass.”
“It takes more than being a great athlete to be a great quarterback and Phipps has these qualities. He is a fine thrower, but he also has the poise to stay in there and pass under pressure.”
Bell has grabbed 16 of Phipps’ passes for 256 yards and three touchdowns and when Cooper and Bullock aren’t carrying the ball, they’re likely to be found in the opponents’ secondary looking for a pass.
Phipps has thrown 10 times to Cooper and nine to Bullock for 184 and 186 yards and a total of three touchdowns.
But their main function is to keep the defense honest for Phipps’ aerial assault and this they do with considerable ability.
Cooper leads the team in rushing with 260 yards on 61 carries. Bullock has 164 yards on 37 carries.
Mollenkopf calls Cooper, playing in Leroy Keyes’ old spot, “a stronger runner than Leroy” on inside rushing plays. “Leroy’s great ability was to pick his holes.”
Bullock is used more as a pass receiver than Perry Williams was and Mollenkopf explains that Bullock isn’t quite the same blocker as Williams “but he’s a great pass receiver. He can change direction very quickly.”
One of the big questions hanging over the Boilermakers at the start of the season concerned pass receivers but with the development of Bell, Cooper and Bullock—plus Stan Brown—this worry has disappeared.
Brown also has hooked onto 10 of Phipps’ aerials for 244 yards and three TDs. He’s the leading scorer with 30 points.
In addition to pass receiving, Purdue started out with worry about its offensive line.
This worry, too, has been disappearing.
“We knew we had two good runners,” said Mollenkopf, “Our big concern was with the blocking in the line, but we’ve been very pleased so far.”
The line has both blocked well for the running plays as well as provided good protection for Phipps, who, incidentally, doesn’t hesitate to scramble with the football if he has to.