Michigan State Socks It To Michigan, 23-12 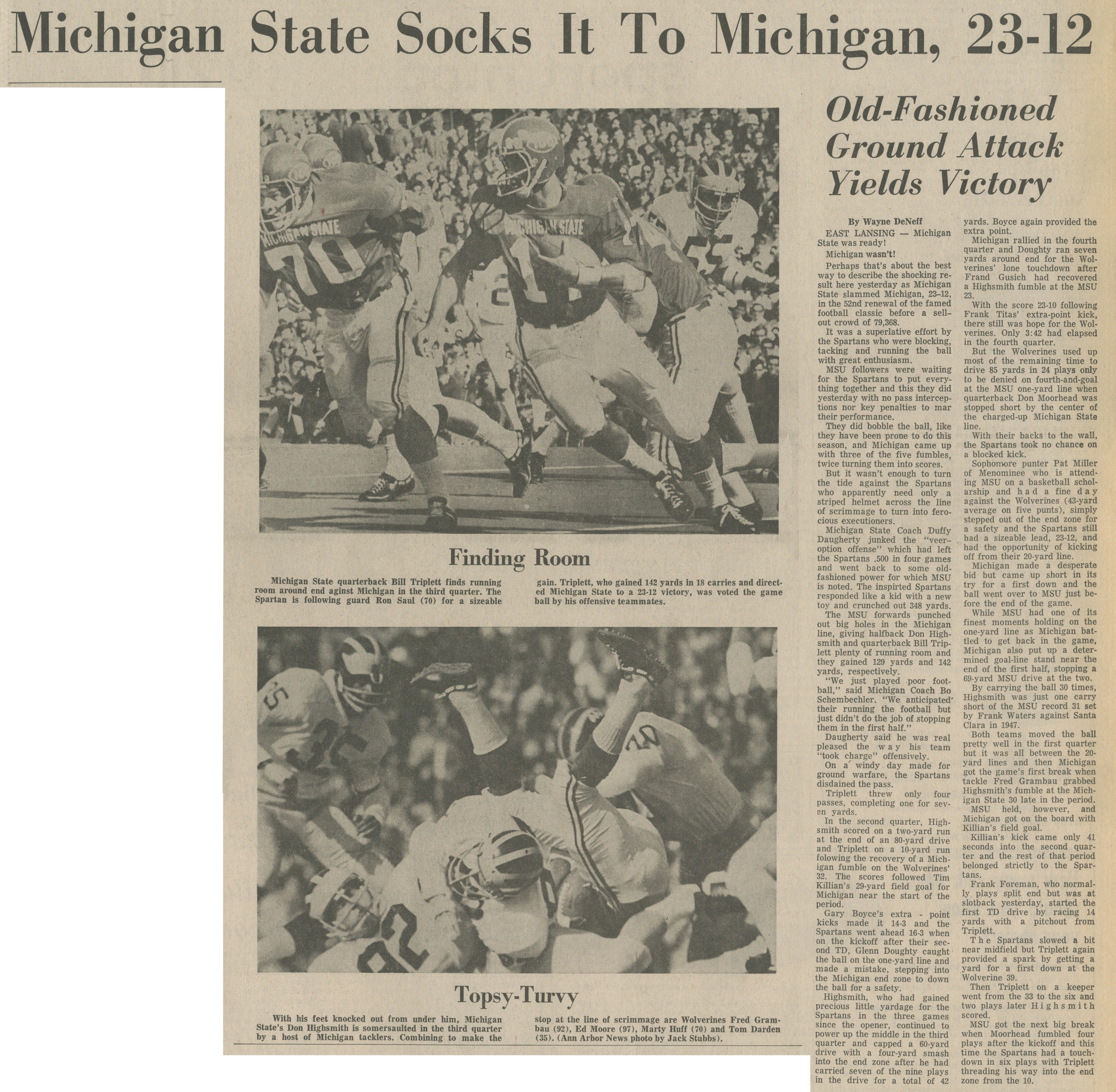 MICHIGAN STATE SOCKS IT TO MICHIGAN, 23-12

Perhaps that’s about the best way to describe the shocking result here yesterday as Michigan State slammed Michigan, 23-12, in the 52nd renewal of the famed football classic before a sellout crowd of 79,368.

It was a superlative effort by the Spartans who were blocking, tackling and running the ball with great enthusiasm.

MSU followers were waiting for the Spartans to put everything together and this they did yesterday with no pass interceptions nor key penalties to mar their performance.

They did bobble the ball, like they have been prone to do this season, and Michigan came up with three of the five fumbles, twice turning them into scores.

But it wasn’t enough to turn the tide against the Spartans who apparently need only a striped helmet across the line of scrimmage to turn into ferocious executioners.

Michigan State Coach Duffy Daugherty junked the “veer-option offense” which had left the Spartans .500 in four games and went back to some old-fashioned power for which MSU is noted. The inspired Spartans responded like a kid with a new toy and crunched out 348 yards.

The MSU forwards punched out big holes in the Michigan line, giving halfback Don Highsmith and quarterback Bill Triplett plenty of running room and they gained 129 yards and 142 yards, respectively.

“We just played poor football,” said Michigan Coach Bo Schembechler. “We anticipated their running the football but just didn’t do the job of stopping them in the first half.”

Daugherty said he was real pleased the way his team “took charge” offensively.

On a windy day made for ground warfare, the Spartans disdained the pass.

Triplett threw only four passes, completing one for seven yards.

In the second quarter, Highsmith scored on a two-yard run at the end of an 80-yard drive and Triplett on a 10-yard run following the recovery of a Michigan fumble on the Wolverines’ 32. The scores followed Tim Killian’s 29-yard field goal for Michigan near the start of the period.

Gary Boyce’s extra-point kicks made it 14-3 and the Spartans went ahead 16-3 when on the kickoff after their second TD, Glenn Doughty caught the ball on the one-yard line and made a mistake, stepping into the Michigan end zone to down the ball for a safety.

Highsmith, who had gained precious little yardage for the Spartans in the three games since the opener, continued to power up the middle in the third quarter and capped a 60-yard drive with a four-yard smash into the end zone after he had carried seven of the nine plays in the drive for a total of 42 yards. Boyce again provided the extra point.

Michigan rallied in the fourth quarter and Doughty ran seven yards around end for the Wolverines’ lone touchdown after Frand Gusich had recovered a Highsmith fumble at the MSU 23.

With the score 23-10 following Frank Titas’ extra-point kick, there still was hope for the Wolverines. Only 3:42 had elapsed in the fourth quarter.

But the Wolverines used up most of the remaining time to drive 85 yards in 24 plays only to be denied on fourth-and-goal at the MSU one-yard line when quarterback Don Moorhead was stopped short by the center of the charged-up Michigan State line.

With their backs to the wall, the Spartans took no chance on a blocked kick.

Sophomore punter Pat Miller of Menominee who is attending MSU on a basketball scholarship and had a fine day against the Wolverines (43-yard average on five punts), simply stepped out of the end zone for a safety and the Spartans still had a sizeable lead, 23-12, and had the opportunity of kicking off from their 20-yard line.

Michigan made a desperate bid but came up short in its try for a first down and the ball went over to MSU just before the end of the game.

While MSU had one of its finest moments holding on the one-yard line as Michigan battled to get back in the game, Michigan also put up a determined goal-line stand near the end of the first half, stopping a 69-yard MSU drive at the two.

By carrying the ball 30 times, Highsmith was just one carry short of the MSU record 31 set by Frank Waters against Santa Clara in 1947.

Both teams moved the ball pretty well in the first quarter but it was all between the 20-yard lines and then Michigan got the game’s first break when tackle Fred Grambau grabbed Highsmith’s fumble at the Michigan State 30 late in the period.

MSU held, however, and Michigan got on the board with Killian’s field goal.

Killian’s kick came only 41 seconds into the second quarter and the rest of that period belonged strictly to the Spartans.

Frank Foreman, who normally plays split end but was at slotback yesterday, started the first TD drive by racing 14 yards with a pitchout from Triplett.

The Spartans slowed a bit near midfield but Triplett again provided a spark by getting a yard for a first down at the Wolverine 39.

Then Triplett on a keeper went from the 33 to the six and two plays later Highsmith scored.

MSU got the next big break when Moorhead fumbled four plays after the kickoff and this time the Spartans had a touchdown in six plays with Triplett threading his way into the end zone from the 10.

PHOTO CAPTION 1: Finding Room: Michigan State quarterback Bill Triplett finds running room around end against Michigan in the third quarter. The Spartan is following guard Ron Saul (70) for a sizeable gain. Triplett, who gained 142 yards in 18 carries and directed Michigan State to a 23-12 victory, was voted the game ball by his offensive teammates.

PHOTO CAPTION 2: Topsy-Turvy: With his feet knocked out from under him, Michigan State’s Don Highsmith is somersaulted in the third quarter by a host of Michigan tacklers. Combining to make the stop at the line of scrimmage are Wolverines Fred Grambau (92), Ed Moore (97), Marty Huff (70) and Tom Darden (35). (Ann Arbor News photo by Jack Stubbs).