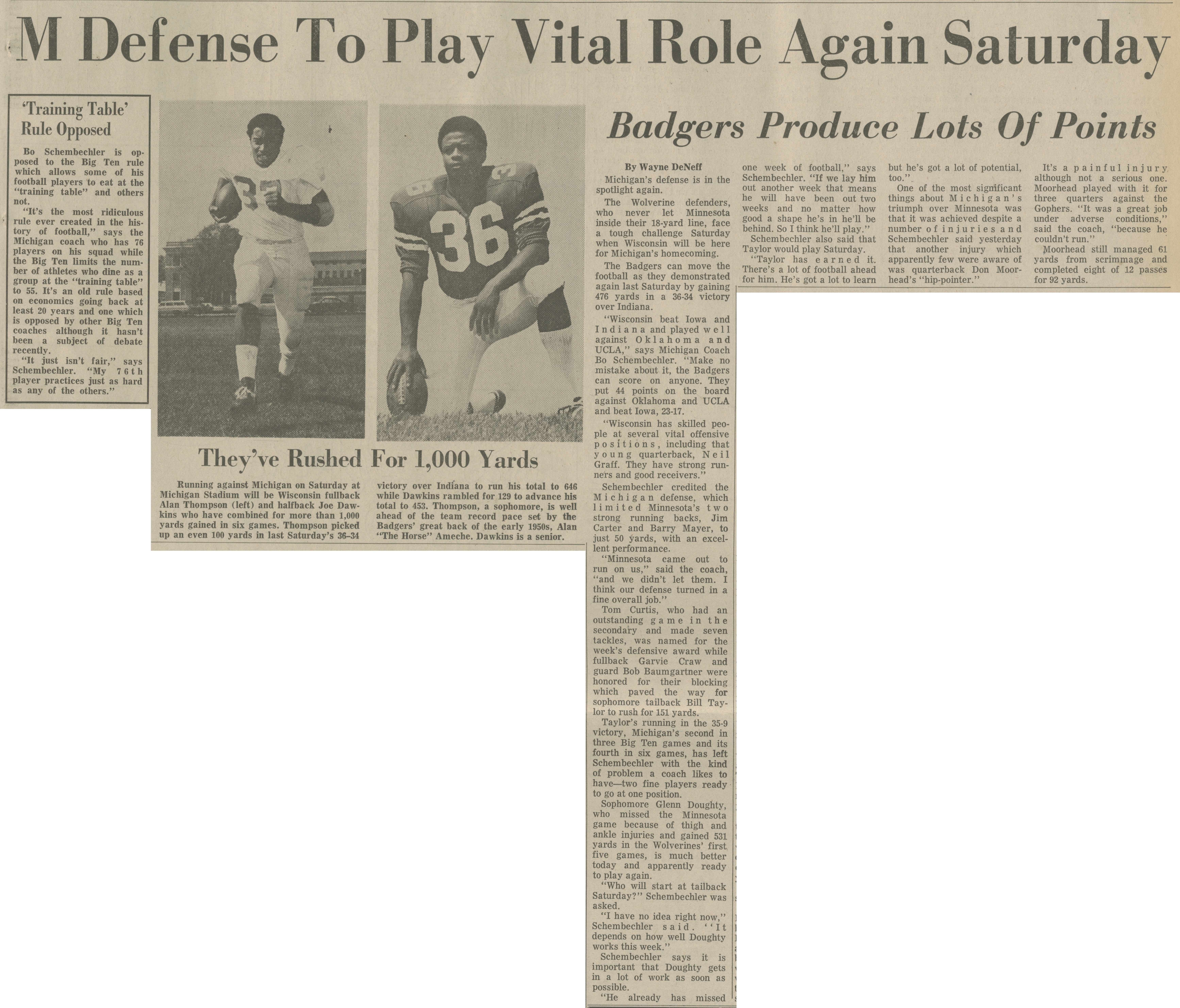 Michigan’s defense is in the spotlight again.
The Wolverine defenders, who never let Minnesota inside their 18-yard line, face a tough challenge Saturday when Wisconsin will be here for Michigan’s homecoming.
The Badgers can move the football as they demonstrated again last Saturday by gaining 476 yards in a 36-34 victory over Indiana.
“Wisconsin beat Iowa and Indiana and played well against Oklahoma and UCLA,” says Michigan Coach Bo Schembechler. “Make no mistake about it, the Badgers can score on anyone. They put 44 points on the board against Oklahoma and UCLA and beat Iowa, 23017.
“Wisconsin has skilled people at several vital offensive positions, including that young quarterback, Neil Graff. They have strong runners and good receivers.”
Schembechler credited the Michigan defense, which limited Minnesota’s two strong running backs, Jim Carter and Barry Mayer, to just 50 yards, with an excellent performance.
“Minnesota came out to run on us,” said the coach, “and we didn’t let them. I think our defense turned in a fine overall job.”
Tom Curtis, who had an outstanding game in the secondary and made seven tackles, was named for the week’s defensive award while fullback Garvie Craw and guard Bob Baumgartner were honored for their blocking which paved the way for sophomore tailback Bill Taylor to rush for 151 yards.
Taylor’s running in the 35-9 victory, Michigan’s second in three Big Ten games and its fourth in six games, has left Schembechler with the kind of problem a coach likes to have—two fine players ready to go at one position.
Sophomore Glenn Doughty, who missed the Minnesota game because of thigh and ankle injuries and gained 531 yards in the Wolverines’ first five games, is much better today and apparently ready to play again.
“Who will start at tailback Saturday?” Schembechler was asked.
“I have no idea right now,” Schembechler said. “It depends on how well Doughty works this week.”
Schembechler says it is important that Doughty gets in a lot of work as soon as possible.
“He already has missed one week of football,” says Schembechler. “If we lay him out another week that means he will have been out two weeks and no matter how good a shape he’s in he’ll be behind. So I think he’ll play.”
Schembechler also said that Taylor would play Saturday.
“Taylor has earned it. There’s a lot of football ahead for him. He’s got a lot to learn but he’s got a lot of potential, too.”
One of the most significant things about Michigan’s triumph over Minnesota was that it was achieved despite a number of injuries and Schembechler said yesterday that another injury which apparently few were aware of was quarterback Don Moorhead’s “hip-pointer.”
It’s a painful injury although not a serious one. Moorhead played with it for three quarters against the Gophers. “It was a great job under adverse conditions,” said the coach, “because he couldn’t run.”
Moorhead still managed to get 61 yards from scrimmage and completed eight of 12 passes for 92 yards.

PHOTO CAPTION: They’ve Rushed For 1,000 Yards: Running against Michigan on Saturday at Michigan Stadium will be Wisconsin fullback Alan Thompson (left) and halfback Joe Dawkins who have combined for more than 1,000 yards gained in sex games. Thompson picked up an even 100 yards in last Saturday’s 36-34 victory over Indiana to run his total to 646 while Dawkins rambled for 149 to advance his total to 453. Thompson, a sophomore, is well ahead of the team record pace set by the Badgers’ great back of the early 1950s, Alan “The Horse” Ameche. Dawkins is a senior.

BOX TEXT: ‘Training Table’ Rule Opposed: Bo Schembechler is opposed to the Big Ten rule which allows some of his football players to eat at the “training table” and others not.
“It’s the most ridiculous rule ever created in the history of football,” says the Michigan coach who has 76 players on his squad while the Big Ten limits the number of athletes who dine as a group at the “training table” to 55. It’s an old rule based on economics going back at least 20 years and one which is opposed by other Big Ten coaches although it hasn’t been a subject of debate recently.
“It just isn’t fair,” says Schembechler. “My 76th player practices just as hard as any of the others.”