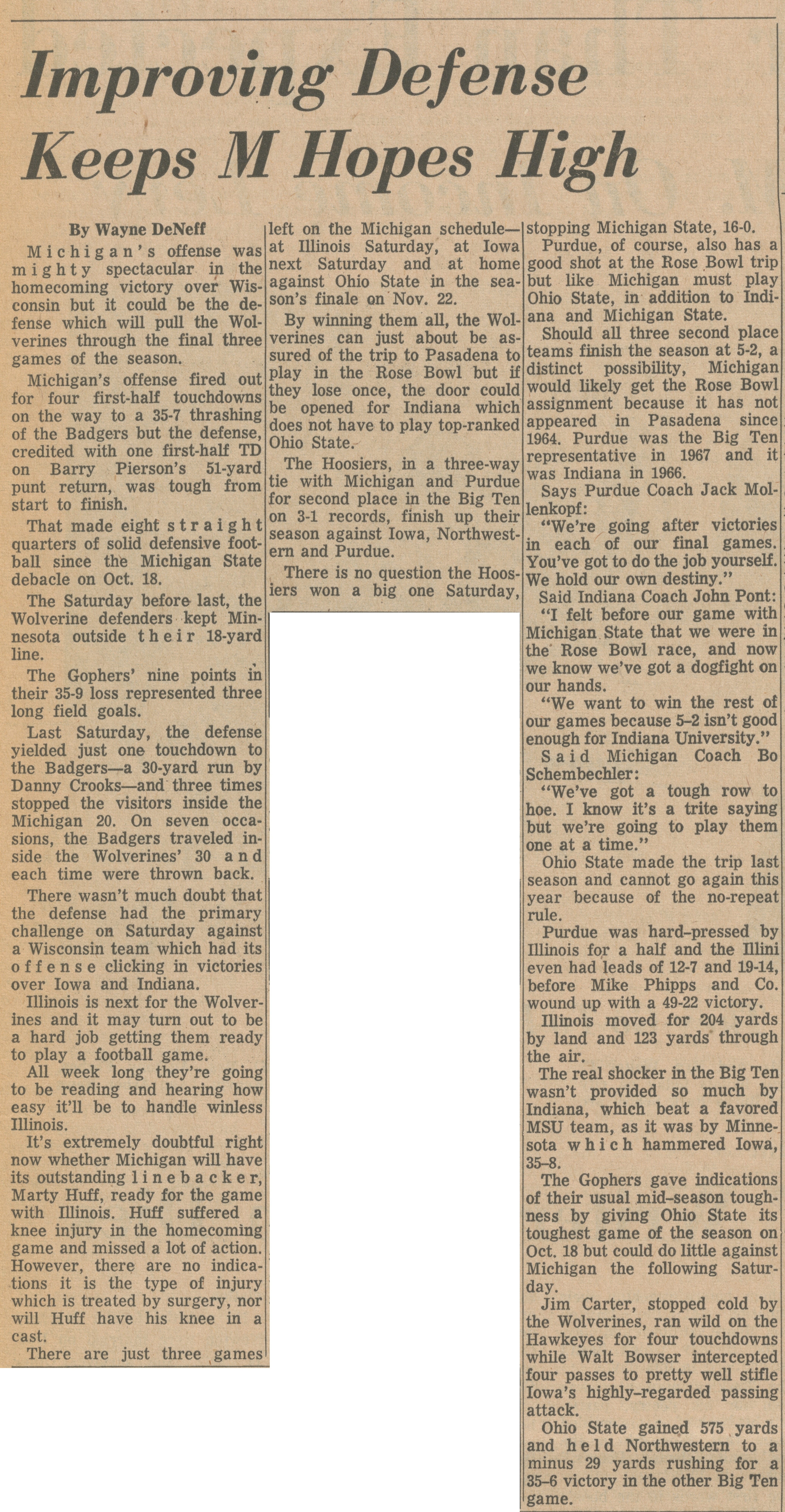 Michigan’s offense was mighty spectacular in the homecoming victory over Wisconsin but it could be the defense which will pull the Wolverines through the final three games of the season.

Michigan’s offense fired out for four first-half touchdowns on the way to a 35-7 thrashing of the Badgers but the defense, credited with one first-half TD on Barry Pierson’s 51-yard punt return, was tough from start to finish.

That made eight straight quarters of solid defensive football since the Michigan State debacle on Oct. 18.

The Saturday before last, the Wolverine defenders kept Minnesota outside their 18-yard line.

Last Saturday, the defense yielded just one touchdown to the Badgers—a 30-yard run by Danny Crooks—and three times stopped the visitors inside the Michigan 20. On seven occasions, the Badgers traveled inside the Wolverines’ 30 and each time were thrown back.

There wasn’t much doubt that the defense had the primary challenge on Saturday against a Wisconsin team which had its offense clicking in victories over Iowa and Indiana.

Illinois is next for the Wolverines and it may turn out to be a hard job getting them ready to play a football game.

All week long they’re going to be reading and hearing how easy it’ll be to handle winless Illinois.

It’s extremely doubtful right now whether Michigan will have its outstanding linebacker, Marty Huff, ready for the game with Illinois. Huff suffered a knee injury in the homecoming game and missed a lot of action. However, there are no indications it is the type of injury which is treated by surgery, nor will Huff have his knee in a cast.

There are just three games left on the Michigan schedule—at Illinois Saturday, at Iowa next Saturday and at home against Ohio State in the season’s finale on Nov. 22.

By winning them all, the Wolverines can just about be assured of the trip to Pasadena to play in the Rose Bowl but if they lose once, the door could be opened for Indiana which does not have to play top-ranked Ohio State.

The Hoosiers, in a three-way tie with Michigan and Purdue for second place in the Big Ten on 3-1 records, finish up their season against Iowa, Northwestern and Purdue.

There is no question the Hoosiers won a big one Saturday, stopping Michigan State, 16-0.

Purdue, of course, also has a good shot at the Rose Bowl trip but like Michigan must play Ohio State, in addition to Indiana and Michigan State.

Should all three second place teams finish the season at 5-2, a distinct possibility, Michigan would likely get the Rose Bowl assignment because it has not appeared in Pasadena since 1964. Purdue was the Big Ten representative in 1967 and it was Indiana in 1966.

“We’re going after victories in each of our final games. You’ve got to do the job yourself. We hold our own destiny.”

“I felt before our game with Michigan State that we were in the Rose Bowl race, and now we know we’ve got a dogfight on our hands.

“We want to win the rest of our games because 5-2 isn’t good enough for Indiana University.”

“We’ve got a tough row to hoe. I know it’s a trite saying but we’re going to play them one at a time.”

Ohio State made the trip last season and cannot go again this year because of the no-repeat rule.

Illinois moved for 204 yards by land and 123 yards through the air.

The real shocker in the Big Ten wasn’t provided so much by Indiana, which beat a favored MSU team, as it was by Minnesota which hammered Iowa, 35-8.

The Gophers gave indications of their usual mid-season toughness by giving Ohio State its toughest game of the season on Oct. 18 but could do little against Michigan the following Saturday.

Ohio State gained 575 yards and held Northwestern to a minus 29 yards rushing for a 35-6 victory in the other Big Ten game.