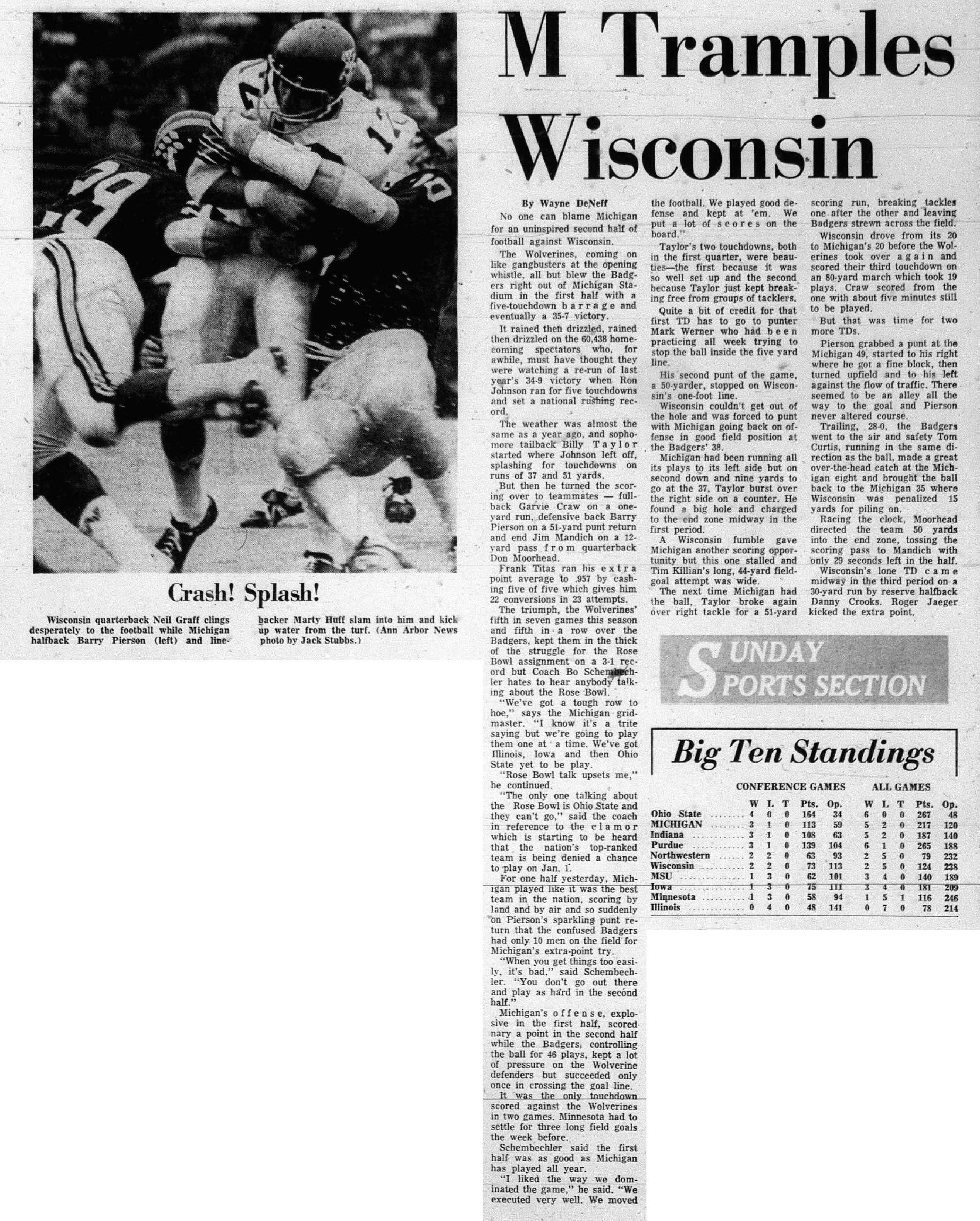 No one can blame Michigan for an uninspired second half of football against Wisconsin.

The Wolverines, coming on like gangbusters at the opening whistle, all but blew the Badgers right out of Michigan Stadium in the first half with a five-touchdown barrage and eventually a 35-7 victory.

The weather was almost the same as a year ago, and sophomore tailback Billy Taylor started where Johnson left off, splashing for touchdowns on runs of 37 and 51 yards.

But then he turned the scoring over to teammates—fullback Garvie Craw on a one-yard run, defensive back Barry Pierson on a 51-yard punt return and end Jim Mandich on a 12-yard pass from quarterback Don Moorhead.

Frank Titas ran his extra point average to .957 by cashing five of five which gives him 22 conversions in 23 attempts.

The triumph, the Wolverines’ fifth in seven games this season and fifth in a row over the Badgers, kept them in the thick of the struggle for the Rose Bowl assignment on a 3-1 record but Coach Bo Schembechler hates to hear anybody talking about the Rose Bowl.

“We’ve got a tough row to hoe,” says the Michigan gridmaster. “I know it’s a trite saying but we’re going to play them one at a time. We’ve got Illinois, Iowa and then Ohio State yet to be played.

“The only one talking about the Rose Bowl is Ohio State and they can’t go,” said the coach in reference to the clamor which is starting to be heard that the nation’s top-ranked team is being denied a chance to play on Jan. 1.

For one half yesterday, Michigan played like it was the best team in the nation, scoring by land and by air and so suddenly on Pierson’s sparkling punt return that the confused Badgers had only 10 men on the field for Michigan’s extra-point try.

“When you get things too easily, it’s bad,” said Schembechler. “You don’t go out there and play as hard in the second half.”

Michigan’s offense, explosive in the first half, scored nary a point in the second half while the Badgers, controlling the ball for 46 plays, kept a lot of pressure on the Wolverine defenders but succeeded only once in crossing the goal line.

It was the only touchdown scored against the Wolverines in two games. Minnesota had to settle for three long field goals the week before.

Schembechler said the first half was as good as Michigan has played all year.

“I liked the way we dominated the game,” he said. “We executed very well. We moved the football. We played good defense and kept at ‘em. We put a lot of scores on the board.”

Taylor’s two touchdowns, both in the first quarter, were beauties—the first because it was so well set up and the second because Taylor just kept breaking free from groups of tacklers.

Quite a bit of credit for that first TD has to go to punter Mark Werner who had been practicing all week trying to stop the ball inside the five yard line.

His second punt of the game, a 50-yarder, stopped on Wisconsin’s one-foot line.

Wisconsin couldn’t get out of the hole and was forced to punt with Michigan going back on offense in good field position at the Badgers’ 38.

Michigan had been running all its plays to its left side but on second down and nine yards to go at the 37, Taylor burst over the right side on a counter. He found a big hole and charged to the end zone midway in the first period.

A Wisconsin fumble gave Michigan another scoring opportunity but this one stalled and Tim Killian’s long, 44-yard field goal attempt was wide.

The next time Michigan had the ball, Taylor broke again over right tackle for a 51-yard scoring run, breaking tackles one after the other and leaving Badgers strewn across the field.

Wisconsin drove from its 20 to Michigan’s 20 before the Wolverines took over again and scored their third touchdown on a 80-yard march which took 19 plays. Craw scored from the one with about five minutes still to be played.

But that was time for two more TDs.

Pierson grabbed a punt at the Michigan 49, started to his right where he got a fine block, then turned upfield and to his left against the flow of traffic. There seemed to be an alley all the way to the goal and Pierson never altered course.

Trailing, 28-0, the Badgers went to the air and safety Tom Curtis, running in the same direction as the ball, made a great over-the-head catch at the Michigan eight and brought the ball back to the Michigan 35 where Wisconsin was penalized 15 yards for piling on.

Racing the clock, Moorhead directed the team 50 yards into the end zone, tossing the scoring pass to Mandich with only 29 seconds left in the half.