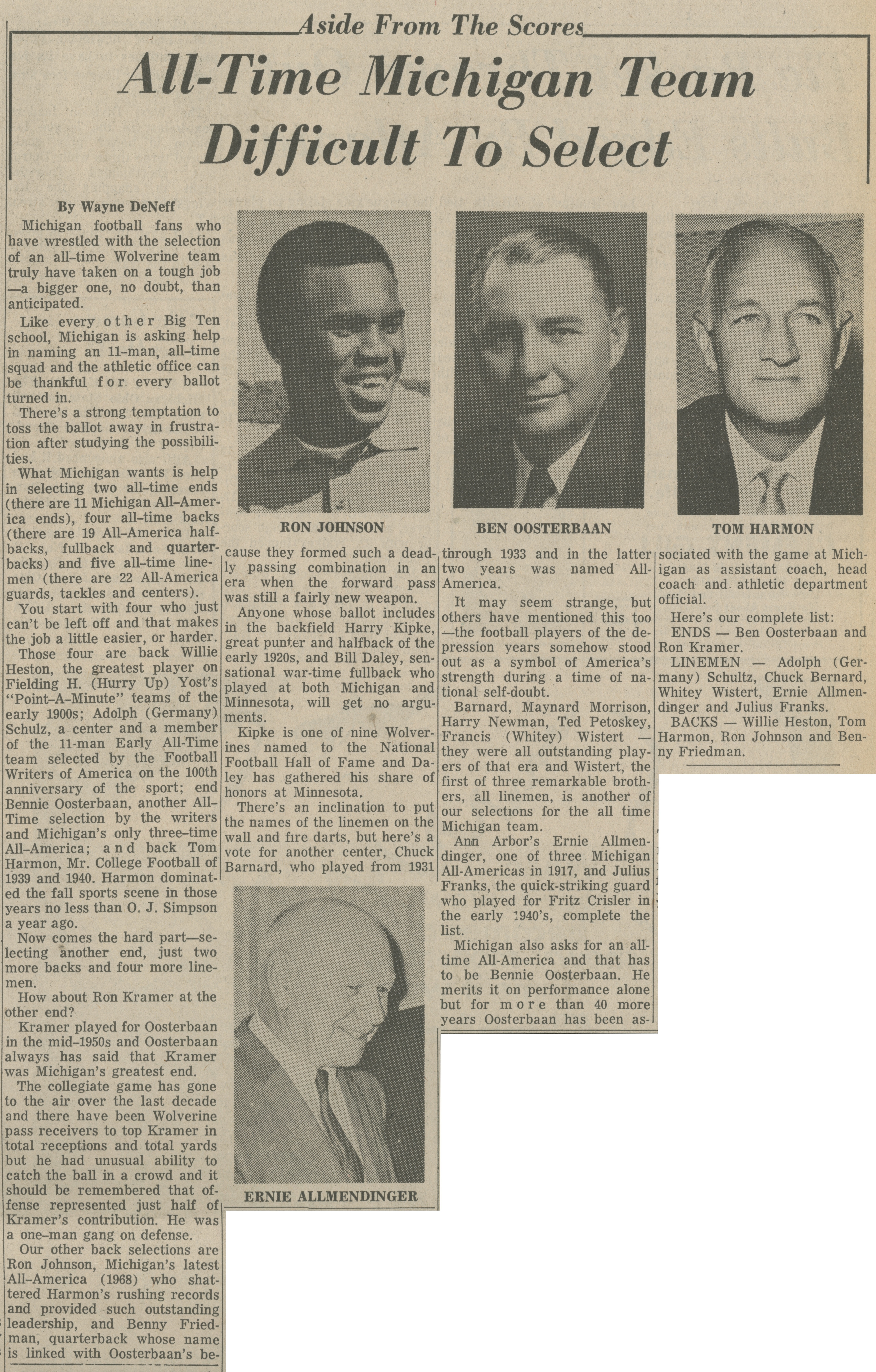 Michigan football fans who have wrestled with the selection of an all-time Wolverine team truly have taken on a tough job—a bigger one, no doubt, than anticipated.
Like every other Big Ten school, Michigan is asking help in naming an 11-man, all-time squad and the athletic office can be thankful for every ballot turned in.
There’s a strong temptation to toss the ballot away in frustration after studying the possibilities.
What Michigan wants is help in selecting two all-time ends (there are 11 Michigan All-America ends), four all-time backs (there are 19 All-America halfbacks, fullback and quarterbacks) and five all-time linemen (there are 22 All-America guards, tackles and centers).
You start with four who just can’t be left off and that makes the job a little easier, or harder.
Those four are back Willie Heston, the greatest player on Fielding H. (Hurry Up) Yost’s “Point-a-Minute” teams of the early 1900s; Adolph (Germany) Schulz, a center and a member of the 11-man Early All-Time team selected by the Football Writers of America on the 100th anniversary of the sport; end Bennie Oosterbaan, another All-Time selection by the writers and Michigan’s only three-time All-America; and back Tom Harmon, Mr. College Football of 1939 and 1940. Harmon dominated the fall sports scene in those years no less than O.J. Simpson a year ago.
Now comes the hard part—selecting another end, just two more backs and four more linemen.
How about Ron Kramer at the other end?
Kramer played for Oosterbaan in the mid-1950s and Oosterbaan always has said that Kramer was Michigan’s greatest end.
The collegiate game has gone to the air over the last decade and there have been Wolverine pass receivers to top Kramer in total receptions and total yards but he had unusual ability to catch the ball in a crowd and it should be remembered that offense represented just half of Kramer’s contribution. He was a one-man gang on defense.
Our other back selections are Ron Johnson, Michigan’s latest All-America (1968) who shattered Harmon’s rushing records and provided such outstanding leadership, and Benny Friedman, quarterback whose name is linked with Oosterbaan’s because they formed such a deadly passing combination in an era when the forward pass was still a fairly new weapon.
Anyone whose ballot includes in the backfield Harry Kipke, great punter and halfback of the early 1920s, and Bill Daley, sensational war-time fullback who played at both Michigan and Minnesota, will get no arguments.
Kipke is one of nine Wolverines named to the National Football Hall of Fame and Daley has gathered his share of honors at Minnesota.
There’s an inclination to put the names of the linemen on the wall and fire darts, but here’s a vote for another center, Chuck Barnard, who played from 1932 through 1933 and in the latter two years was named All-America.
It may seem strange, but others have mentioned this too—the football players of the depression years somehow stood out as a symbol of America’s strength during a time of national self-doubt.
Barnard, Maynard Morrison, Harry Newman, Ted Petoskey, Francis (Whitey) Wistert—they were all outstanding players of that era and Wistert, the first of three remarkable brothers, all linemen, is another of our selections for the all time Michigan team.
Ann Arbor’s Ernie Allmendinger, one of three Michigan All-Americas in 1917, and Julius Franks, the quick-striking guard who played for Fritz Crisler in the early 1940’s, complete the list.
Michigan also asks for an all-time All-America and that has to be Bennie Oosterbaan. He merits it on performance alone but for more than 40 years Oosterbaan has been associated with the game at Michigan as assistant coach, head coach and athletic department official.
Here’s our complete list:
ENDS—Ben Oosterbaan and Ron Kramer.
LINEMEN—Adolph (Germany) Schultz, Chuck Bernard, Whitey Wistert, Ernie Allmendinger and Julius Franks.
BACKS—Willie Heston, Tom Harmon, Ron Johnson and Benny Friedman.