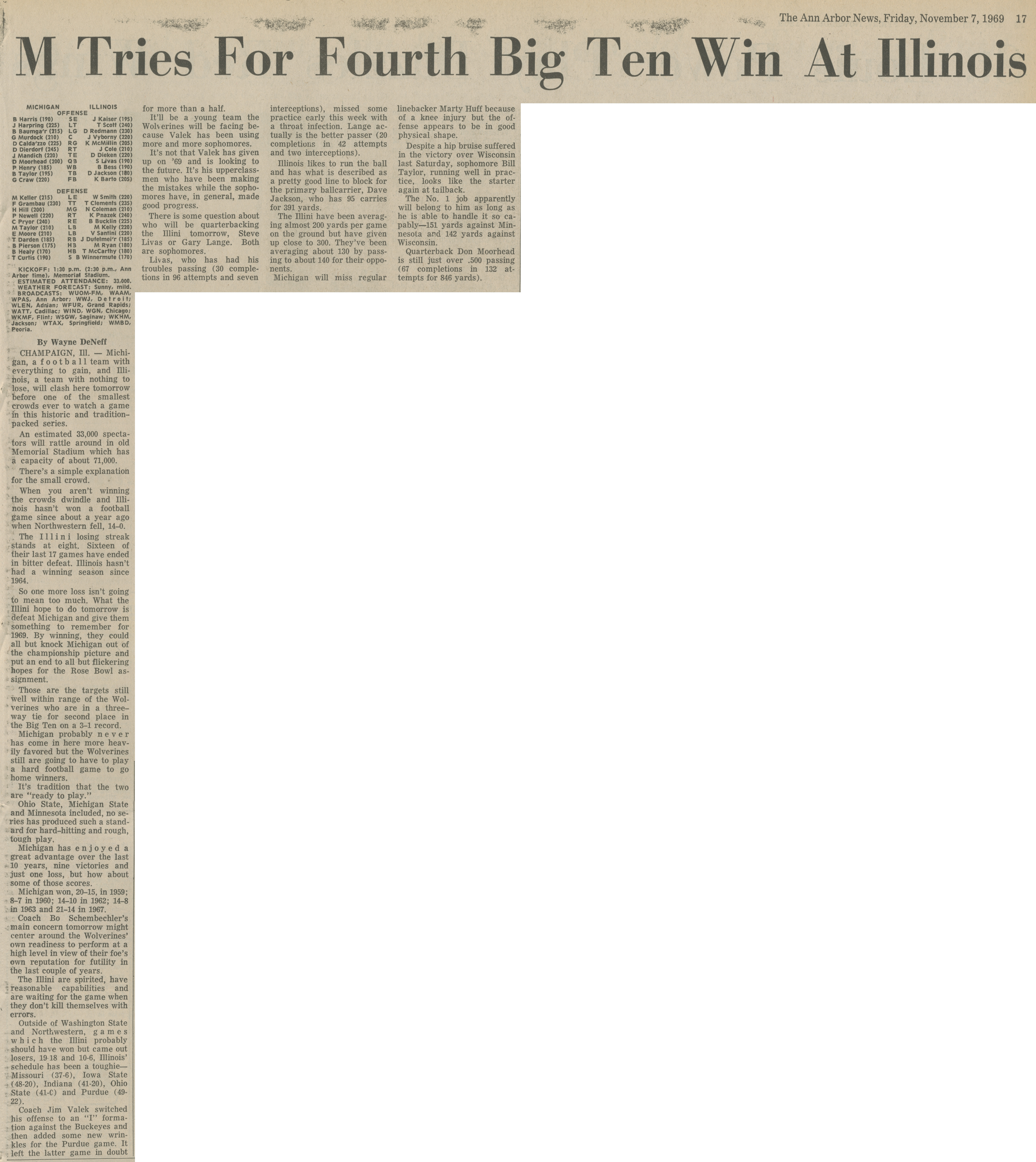 CHAMPAIGN, Ill.—Michigan, a football team with everything to gain, and Illinois, a team with nothing to lose, will clash here tomorrow before one of the smallest crowds ever to watch a game in this historic and tradition-packed series.

An estimated 33,000 spectators will rattle around in old Memorial Stadium which has a capacity of about 71,000.

There’s a simple explanation for the small crowd.

When you aren’t winning the crowds dwindle and Illinois hasn’t won a football game since about a year ago when Northwestern fell, 14-0.

The Illini losing streak stands at eight. Sixteen of their last 17 games have ended in bitter defeat. Illinois hasn’t had a winning season since 1964.

So one more loss isn’t going to mean too much. What the Illini hope to do tomorrow is defeat Michigan and give them something to remember for 1969. By winning, they could all but knock Michigan out of the championship picture and put an end to all but flickering hopes for the Rose Bowl assignment.

Those are the targets still well within range of the Wolverines who are in a three-way tie for second place in the Big Ten on a 3-1 record.

Michigan probably never has come in here more heavily favored but the Wolverines still are going to have to play a hard football game to go home winners.

It’s tradition that the two are “ready to play.”

Ohio State, Michigan State and Minnesota included, no series has produced such a standard for hard-hitting and rough, tough play.

Michigan has enjoyed a great advantage over the last 10 years, nine victories and just one loss, but how about some of those scores.

Coach Bo Schembechler’s main concern tomorrow might center around the Wolverines’ own readiness to perform at a high level in view of their foe’s own reputation for futility in the last couple of years.

The Illini are spirited, have reasonable capabilities and are waiting for the game when they don’t kill themselves with errors.

Coach Jim Valek switched his offense to an “I” formation against the Buckeyes and then added some new wrinkles for the Purdue game. It left the latter game in doubt for more than a half.

It’ll be a young team the Wolverines will be facing because Valek has been using more and more sophomores.

It’s not that Valek has given up on ’69 and is looking to the future. It’s his upperclassmen who have been making the mistakes while the sophomores have, in general, made good progress.

There is some question about who will be quarterbacking the Illini tomorrow, Steve Livas or Gary Lange. Both are sophomores.

Illinois likes to run the ball and has what is described as a pretty good line to block for the primary ballcarrier, Dave Jackson, who has 95 carries for 391 yards.

Michigan will miss regular linebacker Marty Huff because of a knee injury but the offense appears to be in good physical shape.

Despite a hip bruise suffered in the victory over Wisconsin last Saturday, sophomore Bill Taylor, running well in practice, looks like the starter again at tailback.

The No. 1 job apparently will belong to him as long as he is able to handle it so capably—151 yards against Minnesota and 142 yards against Wisconsin.

Quarterback Don Moorhead is still just over .500 passing (67 completions in 132 attempts for 846 yards).