Michigan's Hopes Will Fade Or Soar At Iowa 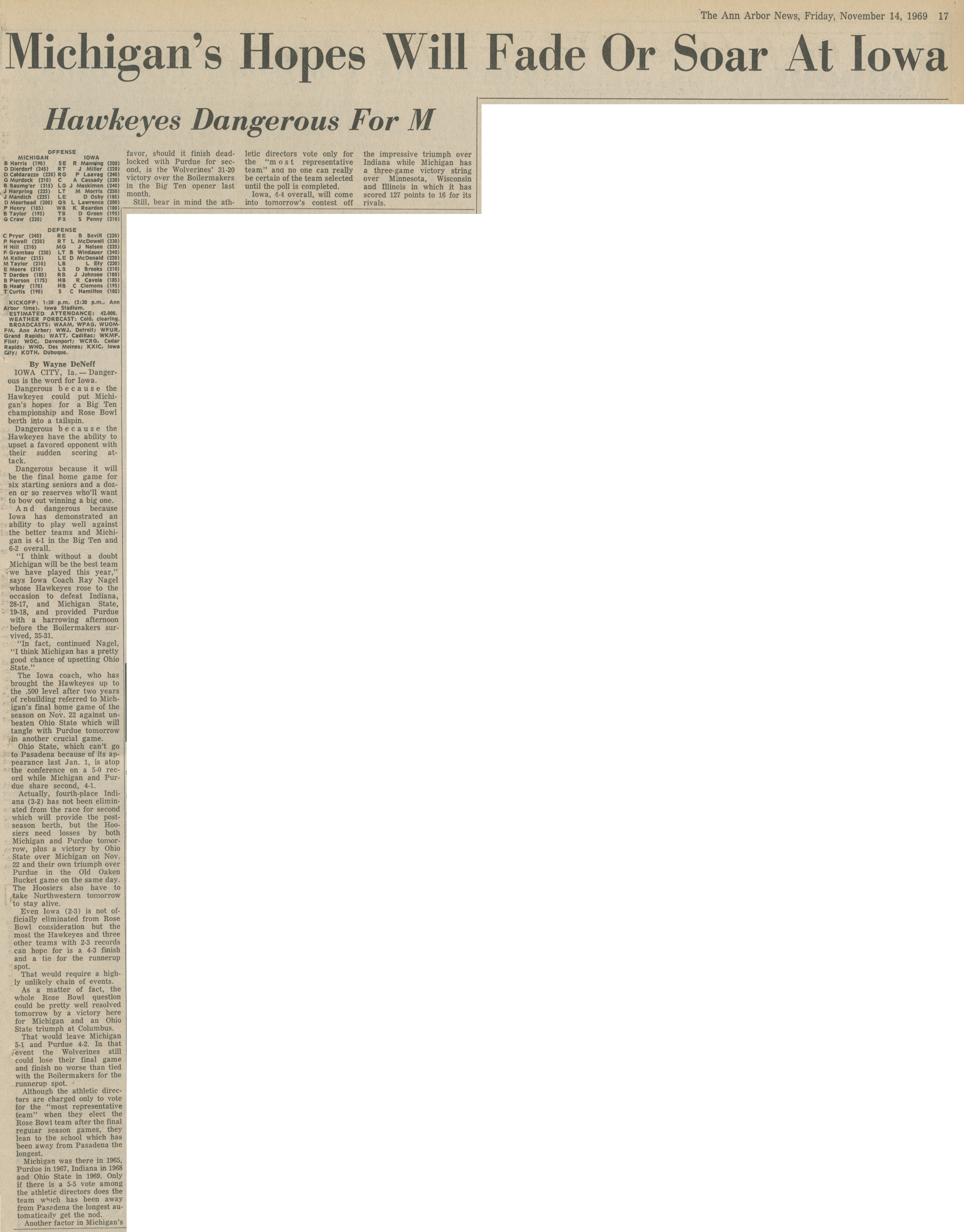 IOWA CITY, Ia.—Dangerous is the word for Iowa.
Dangerous because the Hawkeyes could put Michigan’s hopes for a Big Ten championship and Rose Bowl berth into a tailspin.
Dangerous because the Hawkeyes have the ability to upset a favored opponent with their sudden scoring attack.
Dangerous because it will be the final home game for six starting seniors and ad dozen or so reserves who’ll want to bow out winning a big one.
And dangerous because Iowa has demonstrated an ability to play well against the better teams and Michigan is 4-1 in the Big Ten and 6-2 overall.
“I think without a doubt Michigan will be the best team we have played this year,” says Iowa Coach Ray Nagel whose Hawkeyes rose to the occasion to defeat Indiana, 28-17, and Michigan State, 19-18, and provided Purdue with a harrowing afternoon before the Boilermakers survived, 35-31.
“In fact,” continued Nagel, “I think Michigan has a pretty good chance of upsetting Ohio State.”
The Iowa coach, who has brought the Hawkeyes up to the .500 level after two years of rebuilding referred to Michigan’s final home game of the season on Nov. 22 against unbeaten Ohio State which will tangle with Purdue tomorrow in another crucial game.
Ohio State, which can’t go to Pasadena because of its appearance last Jan. 1, is atop the conference on a 5-0 record while Michigan and Purdue share second, 4-1.
Actually, fourth-place Indiana (3-2) has not been eliminated from the race for second which will provide the postseason berth, but the Hoosiers need losses by both Michigan and Purdue tomorrow, plus a victory by Ohio State over Michigan on Nov. 22 and their own triumph over Purdue in the Old Oaken Bucket game on the same day. The Hoosiers also have to take Northwestern tomorrow to stay alive.
Even Iowa (2-3) is not officially eliminated from Rose Bowl consideration but the most the Hawkeyes and three other teams with 2-3 records can hope for is a 4-3 finish and a tie for the runnerup spot.
Although the athletic directors are charged only to vote for the “most representative team” when they elect the Rose Bowl team after the final regular season games, they lean to the school which has been away from Pasadena the longest.
Michigan was there in 1965, Purdue in 1967, Indiana in 1968 and Ohio State in 1969. Only if there is a 5-5 vote among the athletic directors does the team which has been away from Pasadena the longest automatically get the lead.
Another factor in Michigan’s favor, should it finish deadlocked with Purdue for second, is the Wolverines’ 31-20 victory over the Boilermakers in the Big Ten opener last month.
Still, bear in mind the athletic directors vote only for the “most representative team” and no one can really be certain of the team selected until the poll is completed.
Iowa, 4-4 overall, will come into tomorrow’s contest off the impressive triumph over Indiana while Michigan has a three-game victory string over Minnesota, Wisconsin and Illinois in which it has scored 127 points to 16 for its rivals.