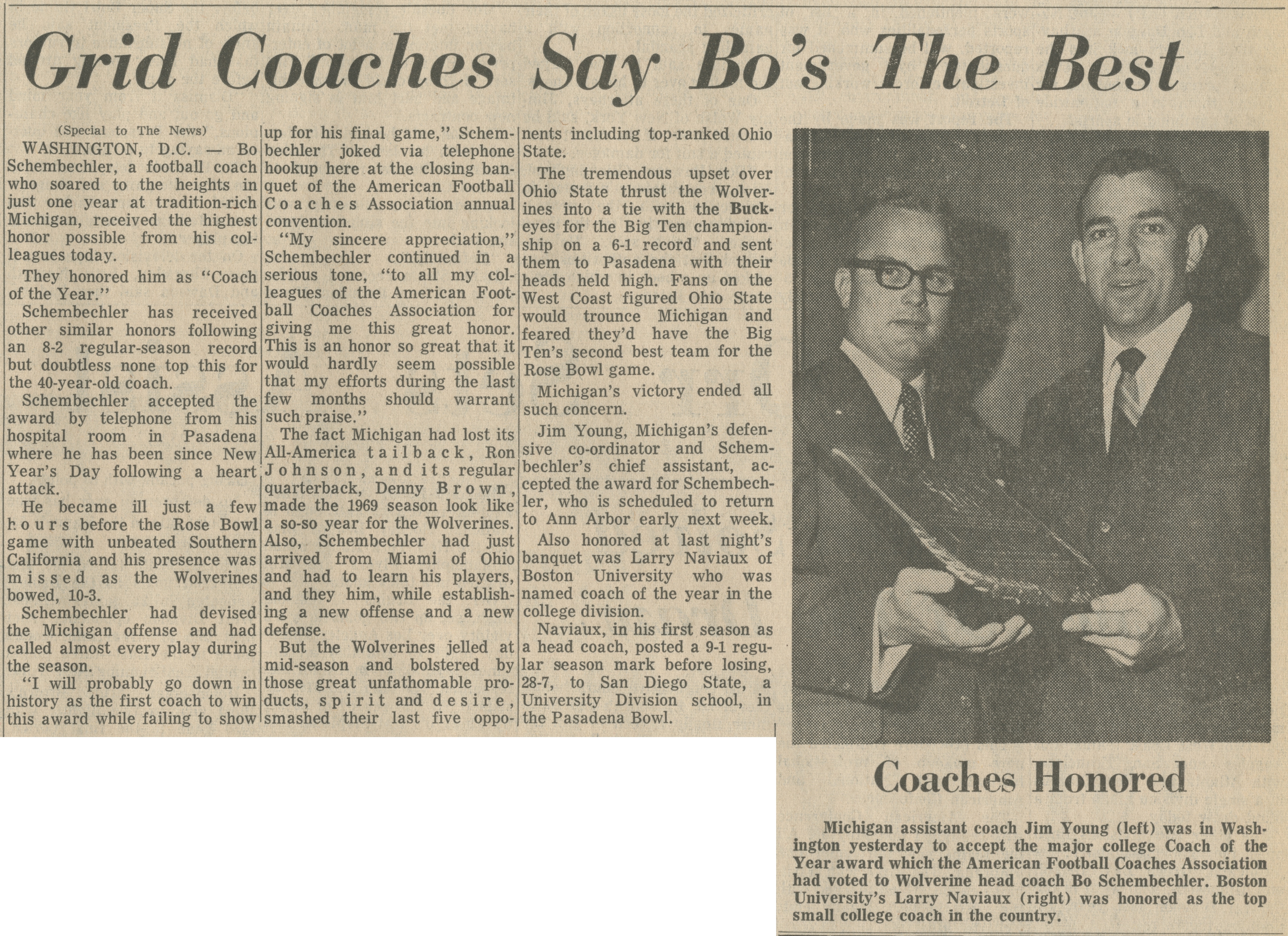 WASHINGTON, D.C.—Bo Schembechler, a football coach who soared to the heights in just one year at tradition-rich Michigan, received the highest honor possible from his colleagues today.
They honored him as “Coach of the Year.”
Schembechler has received other similar honors following an 8-2 regular-season record but doubtless none top this for the 40-year-old coach.
Schembechler accepted the award by telephone from his hospital room in Pasadena where he has been since New Year’s Day following a heart attack.
He became ill just a few hours before the Rose Bowl game with unbeaten Southern California and his presence was missed as the Wolverines bowed, 10-3.
Schembechler had devised the Michigan offense and had called almost every play during the season.
“I will probably go down in history as the first coach to win this award while failing to show up for his final game,” Schembechler joked via telephone hookup here at the closing banquet of the American Football Coaches Association annual convention.
“My sincere appreciation,” Schembechler continued in a serious tone, “to all my colleagues of the American Football Coaches Association for giving me this great honor. This is an honor so great that it would hardly seem possible that my efforts during the last few months should warrant such praise.”
The fact Michigan had lost its All-America tailback, Ron Johnson, and its regular quarterback, Denny Brown, made the 1969 season look like a so-so year for the Wolverines. Also, Schembechler had just arrived from Miami of Ohio and had to learn his players, and they him, while establishing a new offense and a new defense.
But the Wolverines jelled at mid-season and bolstered by those great unfathomable products, spirit and desire, smashed their last five opponents including top-ranked Ohio State.
The tremendous upset over Ohio State thrust the Wolverines into a tie with the Buckeyes for the Big Ten championship on a 6-1 record and sent them to Pasadena with their heads held high. Fans on the West Coast figured Ohio State would trounce Michigan and feared they’d have the Big Ten’s second best team for the Rose Bowl game.
Michigan’s victory ended all such concern.
Jim Young, Michigan’s defensive coordinator and Schembechler’s chief assistant, accepted the award for Schembechler, who is scheduled to return to Ann Arbor early next week.
Also honored at last night’s banquet was Larry Naviaux of Boston University who was named coach of the year in the college division.
Naviaux, in his first season as a head coach, posted a 9-1 regular season mark before losing, 28-7, to San Diego State, a University Division school, in the Pasadena Bowl.