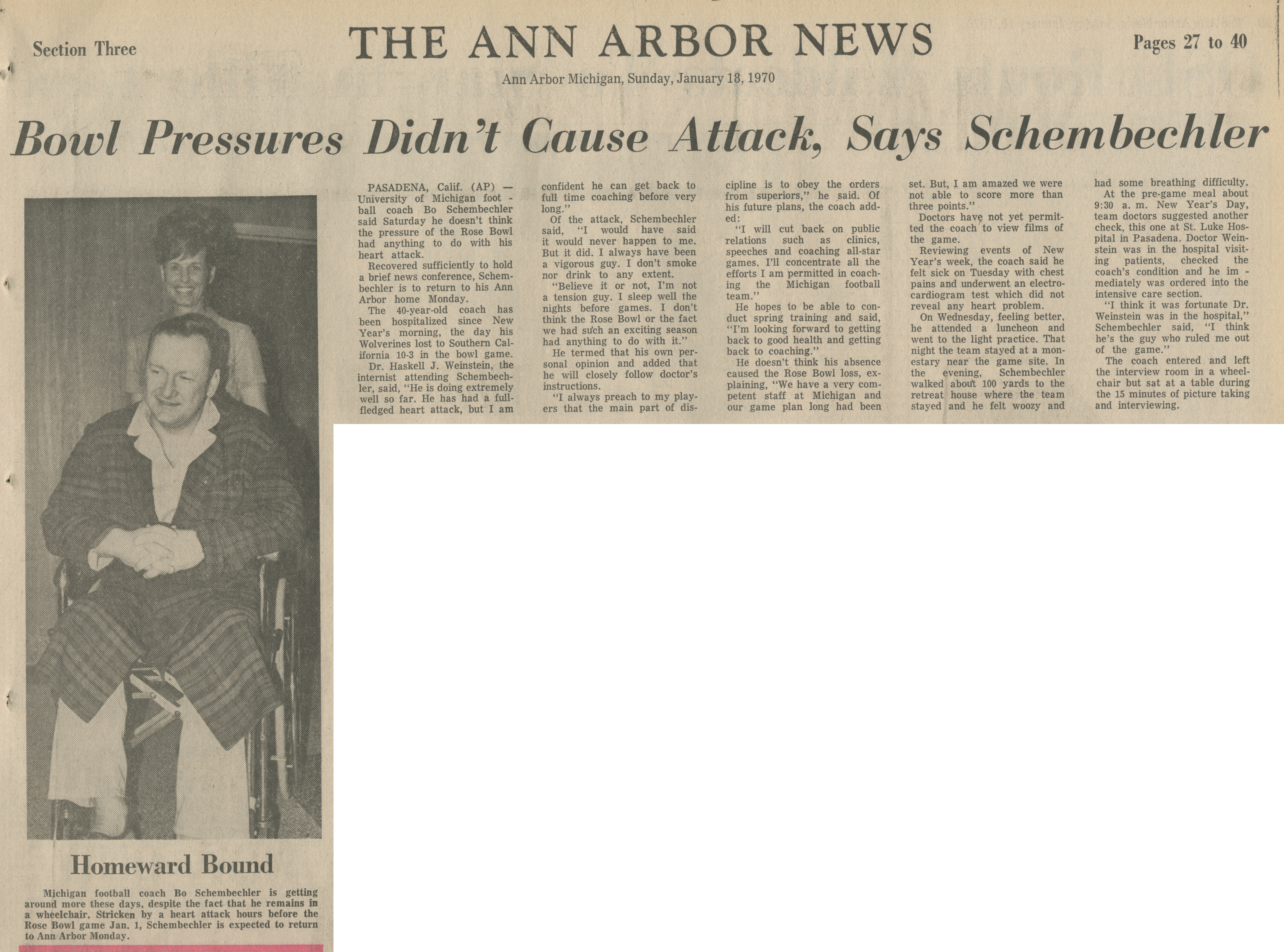 PASADENA, Calif. (AP)—University of Michigan football coach Bo Schembechler said Saturday he doesn’t think the pressure of the Rose Bowl had anything to do with his heart attack.
Recovered sufficiently to hold a brief news conference, Schembechler is to return to his Ann Arbor home Monday.
The 40-year-old coach has been hospitalized since New Year’s morning, the day his Wolverines lost to Southern California 10-3 in the bowl game.
Dr. Haskell J. Weinstein, the internist attending Schembechler, said, “He is doing extremely well so far. He has had a full-fledged heart attack, but I am confident he can get back to full time coaching before very long.”
Of the attack, Schembechler said, “I would have said it would never happen to me. But it did. I always have been a vigorous guy. I don’t smoke nor drink to any extent.
Believe it or not, I’m not a tension guy. I sleep well the nights before games. I don’t think the Rose Bowl or the fact we had such an exciting season had anything to do with it.”
He termed that his own personal opinion and added that he will closely follow doctor’s instructions.
“I always preach to my players that the main part of discipline is to obey the orders from superiors,” he said. Of his future plans, the coach added:
“I will cut back on public relations such as clinics, speeches and coaching all-star games. I’ll concentrate all the efforts I am permitted in coaching the Michigan football team.”
He hopes to be able to conduct spring training and said, “I’m looking forward to getting back to good health and getting back to coaching.”
He doesn’t think his absence caused the Rose Bowl loss, explaining, “We have a very competent staff at Michigan and our game plan long had been set. But, I am amazed we were not able to score more than three points.”
Doctors have not yet permitted the coach to view films of the game.
Reviewing events of New Year’s week, the coach said he felt sick on Tuesday with chest pains and underwent an electrocardiogram test which did not reveal any heart problem.
On Wednesday, feeling better, he attended a luncheon and went to the light practice. That night the team stayed at a monastery near the game site. In the evening, Schembechler walked about 100 yards to the retreat house where the team stayed and he felt woozy and had some breathing difficulty.
At the pre-game meal about 9:30 a.m. New Year’s Day, team doctors suggested another check, this one at St. Luke Hospital in Pasadena. Doctor Weinstein was in the hospital visiting patients, checked the coach’s condition and he immediately was ordered into the intensive care section.
“I think it was fortunate Dr. Weinstein was in the hospital,” Schembechler said, “I think he’s the guy who ruled me out of the game.”
The coach entered and left the interview room in a wheelchair but sat at a table during the 15 minutes of picture taking and interviewing.
PHOTO CAPTION: Homeward Bound: Michigan football coach Bo Schembechler is getting around more these days, despite the fact that he remains in a wheelchair. Stricken by a heart attack hours before the Rose Bowl game Jan. 1, Schembechler is expected to return to Ann Arbor Monday.