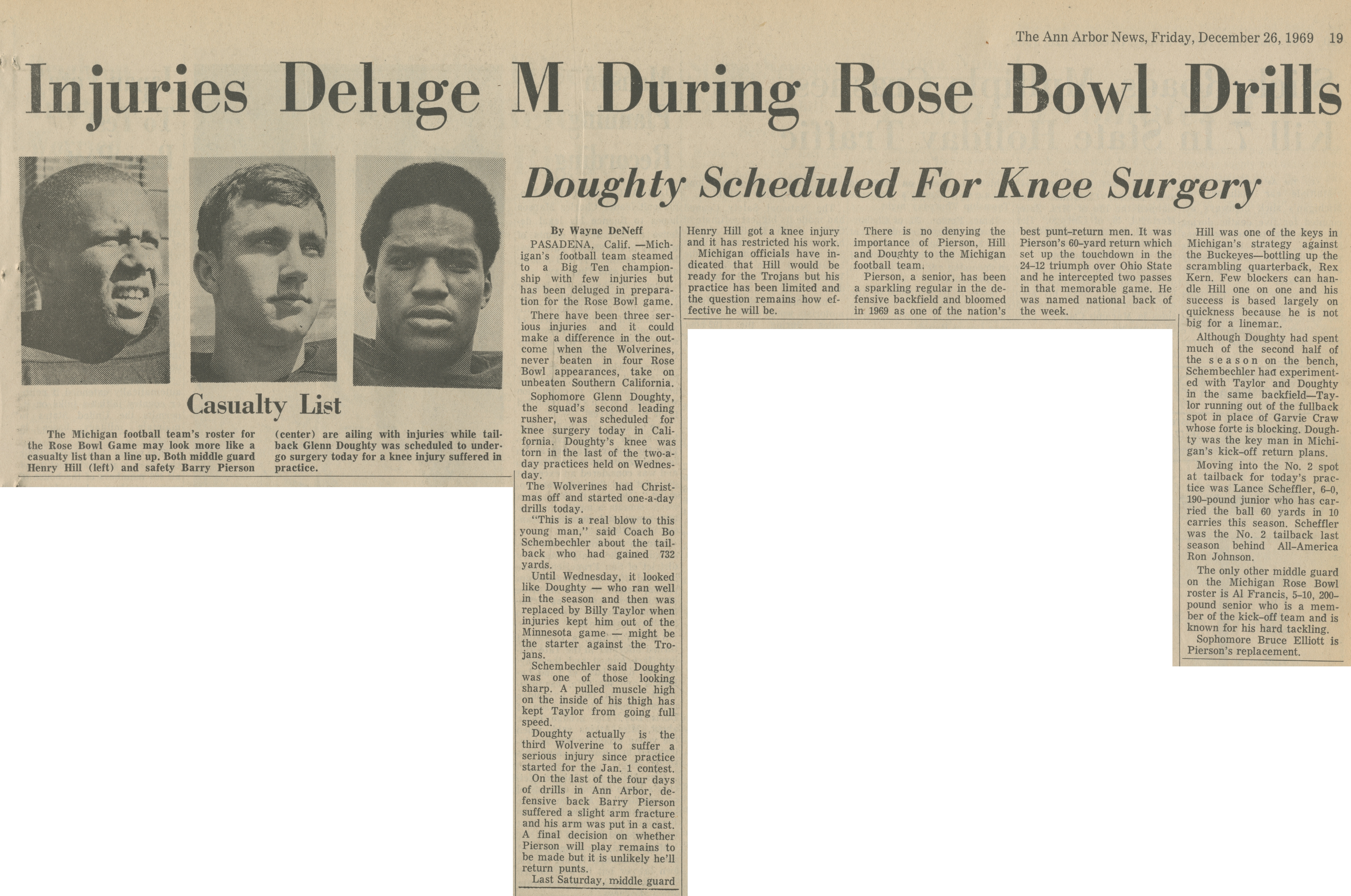 PASADENA, Calif.—Michigan’s football team steamed to a Big Ten championship with few injuries but has been deluged in preparation for the Rose Bowl game.

There have been three serious injuries and it could make a difference in the outcome when the Wolverines, never beaten in four Rose Bowl appearances, take on unbeaten Southern California.

Sophomore Glenn Doughty, the squad’s second leading rusher, was scheduled for knee surgery today in California. Doughty’s knee was torn in the last of the two-a-day practices held on Wednesday.

The Wolverines had Christmas off and started one-a-day drills today.

“This is a real blow to this young man,” said Coach Bo Schembechler about the tailback who had gained 732 yards.

Until Wednesday, it looked like Doughty—who ran well in the season and then was replaced by Billy Taylor when injuries kept him out of the Minnesota game—might be the starter against the Trojans.

Schembechler said Doughty was one of those looking sharp. A pulled muscle high on the inside of his thigh has kept Taylor from going full speed.

Doughty actually is the third Wolverine to suffer a serious injury since practice started for the Jan. 1 contest.

On the last of the four days of drills in Ann Arbor, defensive back Barry Pierson suffered a slight arm fracture and his arm was put in a cast. A final decision on whether Pierson will play remains to be made but it is unlikely he’ll return punts.

Last Saturday, middle guard Henry Hill got a knee injury and it has restricted his work.

Michigan officials have indicated that Hill would be ready for the Trojans but his practice has been limited and the question remains how effective he will be.

There is no denying the importance of Pierson, Hill and Doughty to the Micigan football team.

Pierson, a senior, has been a sparkling regular in the defensive backfield and bloomed in 1969 as one of the nation’s best punt-return men. It was Pierson’s 60-yard return which set up the touchdown in the 24-12 triumph over Ohio State and he intercepted two passes in that memorable game. He was named national back of the week.

Hill was one of the keys in Michigan’s strategy against the Buckeyes—bottling up the scrambling quarterback, Rex Kern. Few blockers can handle Hill one on one and his success is based largely on quickness because he is not big for a lineman.

Although Doughty had spent much of the second half of the season on the bench, Schembechler had experimented with Taylor and Doughty in the same backfield—Taylor running out of the fullback spot in place of Garvie Craw whose forte is blocking. Doughty was the key man in Michigan’s kick-off return plans.

Moving into the No. 2 spot at tailback for today’s practice was Lance Scheffler, 6-0, 190-pound junior who has carried the ball 60 yards in 10 carries this season. Scheffler was the No. 2 tailback last season behind All-America Ron Johnson.

The only other middle guard on the Michigan Rose Bowl roster is Al Francis, 5-10, 200-pound senior who is a member of the kick-off team and is known for his hard tackling.

PHOTO CAPTION: Casualty List: The Michigan football team’s roster for the Rose Bowl game may look more like a casualty list than a line up. Both middle guard Henry Hill (left) and safety Barry Pierson (center) are ailing with injuries while tailback Glenn Doughty was scheduled to undergo surgery today for a knee injury suffered in practice.