Dogs And Cats Are Victims Of Ann Arbor's Housing Shortage 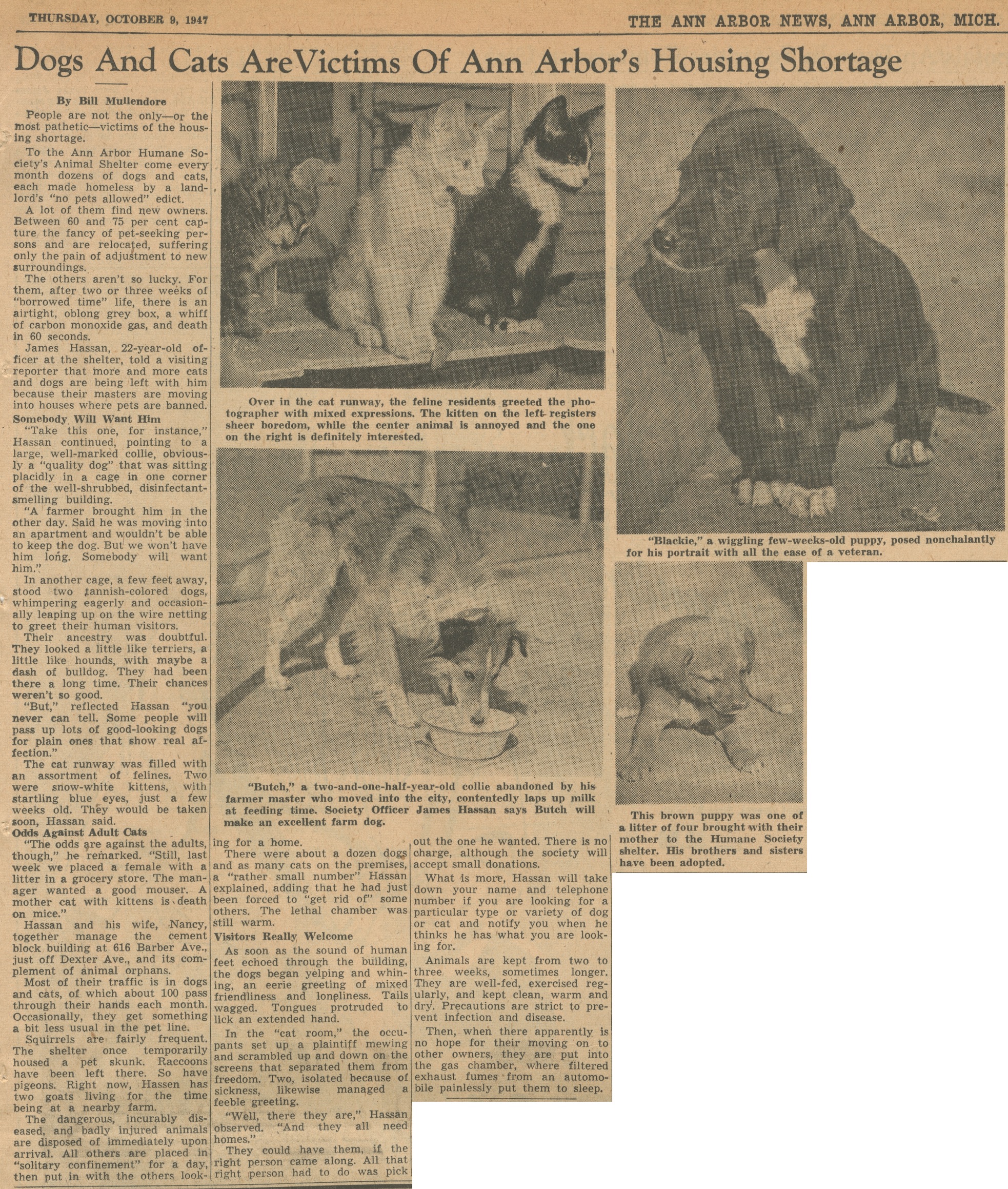 ﻿Dogs And Cats Are Victims Of Ann Arbor's Housing Shortage

People are not the only--or the most pathetic--victims of the housing shortage.

To the Ann Arbor Humane Society's Animal Shelter come every month dozens of dogs and cats, each made homeless by a landlord's "no pets allowed" edict.

A lot of them find new owners. Between 60 and 75 per cent capture the fancy of pet-seeking persons and are relocated, suffering only the pain of adjustment to new surroundings.

The others aren't so lucky. For them, after two or three weeks of "borrowed time" life, there is an airtight, oblong grey box, a whiff of carbon monoxide gas, and death in 60 seconds.

James Hassan, 22-year-old officer at the shelter, told a visiting reporter that more and more cats and dogs are being left with him because their masters are moving into houses where pets are banned.

Somebody Will Want Him

"Take this one, for instance," Hassan continued, pointing to a large, well-marked collie, obviously a "quality dog" that was sitting placidly in a cage in one corner of the well-scrubbed, disinfectant-smelling building.

"A farmer brought him in the other day. Said he was moving into an apartment and wouldn't be able to keep the dog. But we won't  have him long. Somebody will want him."

In another cage, a few feet away, stood two tannish-colored dogs, whimpering eagerly and occasionally leaping up on the wire netting to greet their human visitors.

Their ancestry was doubtful. They looked a little like terriers, a little like hounds, with maybe a dash of bulldog. They had been there a long time. Their chances weren't so good.

"But," reflected Hassan "you never can tell. Some people will pass up lots of good-looking dogs for plain ones that show real affection."

The cat runway was filled with an assortment of felines. Two were snow-white kittens, with startling blue eyes, just a few weeks old. They would be taken soon, Hassan said.

"The odds are against the adults, though," he remarked. "Still, last week we placed a female with a litter in a grocery store. The manager wanted a good mouser. A mother cat with kittens is death on mice."

Hassan and his wife, Nancy, together manage the cement block building at 616 Barber Ave., just off Dexter Ave., and its complement of animal orphans.

Most of their traffic is in dogs and cats, of which about 100 pass through their hands each month. Occasionally, they get something a bit less usual in the pet line.

Squirrels are fairly frequent. The shelter once temporarily housed a pet skunk. Raccoons have been left there. So have pigeons. Right now, Hassan has two goats living for the time being at a nearby farm.

The dangerous, incurably diseased, and badly injured animals are disposed of immediately upon arrival. All others are placed in "solitary confinement" for a day, then put in with the others looking for a home.

There were about a dozen dogs and as many cats on the premises, a "rather small number" Hassan explained, adding that he had just been forced to "get rid of" some others. The lethal chamber was still warm.

As soon as the sound of human feet echoed through the building, the dogs began yelping and whining, an eerie greeting of mixed friendliness and loneliness. Tails wagged. Tongues protruded to lick an extended hand.

In the "cat room," the occupants set up a plaintiff mewing and scrambled up and down on the screens that separated them from freedom. Two, isolated because of sickness, likewise managed a feeble greeting.

"Well, there they are," Hassan observed. "And they all need homes."

They could have them, if the right person came along. All that right person had to do was pick out the one he wanted. There is no charge, although the society will accept small donations.

Animals are kept from two to three weeks, sometimes longer. They are well-fed, exercised regularly, and kept clean, warm and dry. Precautions are strict to prevent infection and disease.

Then, when there apparently is no hope for their moving on to other owners, they are put into the gas chamber, where filtered exhaust fumes from an automobile painlessly put them to sleep.

Over in the cat runway, the feline residents greeted the photographer with mixed expressions. The kitten on the left registers sheer boredom, while the center animal is annoyed and the one on the right is definitely interested.

"Butch," a two-and-one-half-year-old collie abandoned by his farmer master who moved into the city, contentedly laps up milk at feeding time. Society Officer James Hassan says Butch will make an excellent farm dog.

"Blackie," a wiggling few-weeks-old-puppy, posed nonchalantly for his portrait with all the ease of a veteran.

This brown puppy was one of a litter of four brought with their mother to the Humane Society shelter. His brothers and sisters have been adopted.