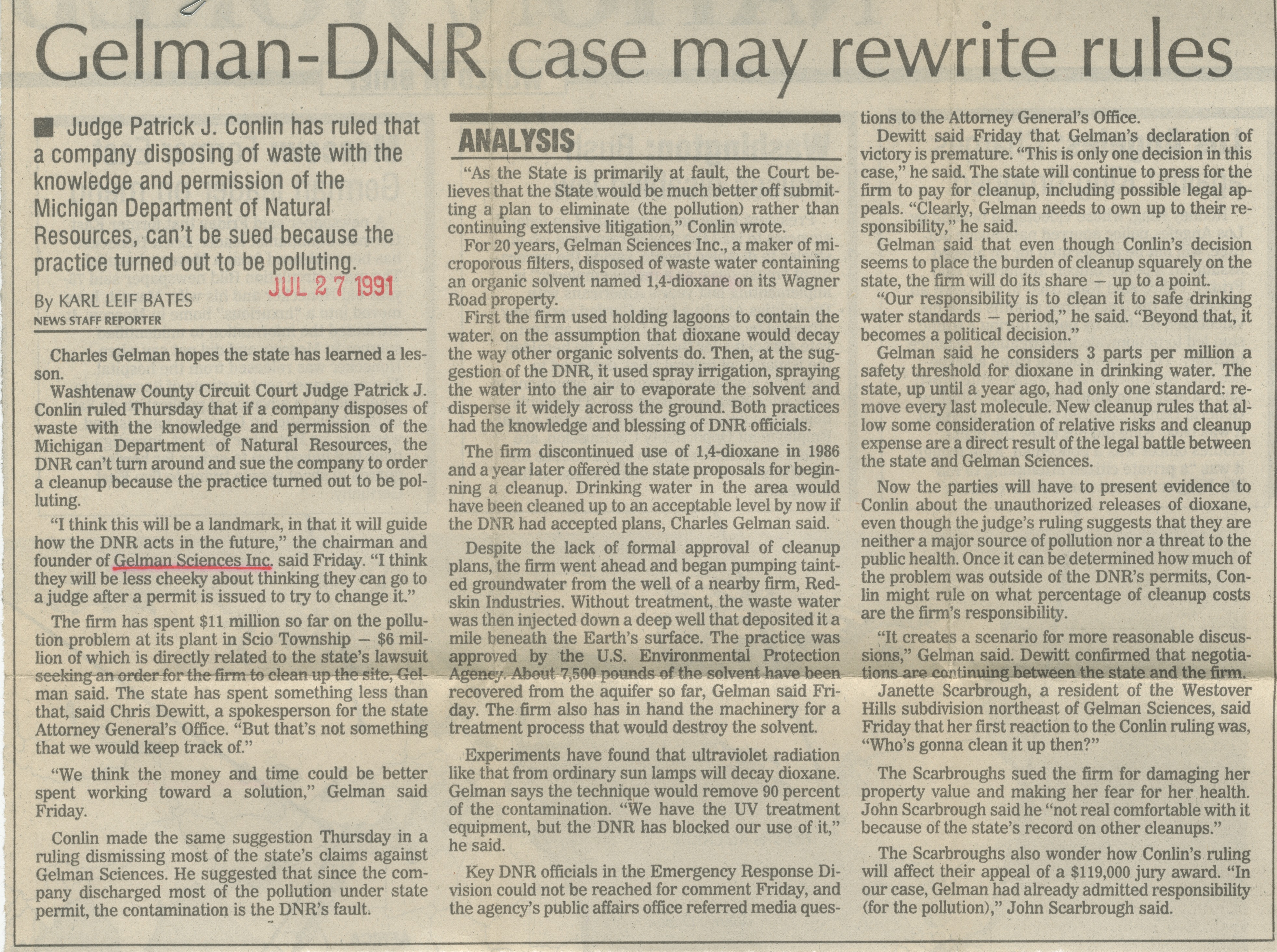 ■ Judge Patrick J. Conlin has ruled that a company disposing of waste with the knowledge and permission of the Michigan Department of Natural Resources, can’t be sued because the practice turned out to be polluting.

Charles Gelman hopes the state has learned a lesson.

Washtenaw County Circuit Court Judge Patrick J. Conlin ruled Thursday that if a company disposes of waste with the knowledge and permission of the Michigan Department of Natural Resources, the DNR can’t turn around and sue the company to order a cleanup because the practice turned out to be polluting.

“I think this will be a landmark, in that it will guide how the DNR acts in the future,” the chairman and founder of Gelman Sciences Inc. said Friday. "I think they will be less cheeky about thinking they can go to a judge after a permit is issued to try to change it.”

The firm has spent $11 million so far on the pollution problem at its plant in Scio Township - $6 million of which is directly related to the state’s lawsuit seeking an order for the firm to dean up the site, Gelman said. The state has spent something less than that, said Chris Dewitt, a spokesperson for the state Attorney General’s Office. “But that’s not something that we would keep track of.”

“We think the money and time could be better spent working toward a solution,” Gelman said Friday.

Conlin made the same suggestion Thursday in a ruling dismissing most of the state’s claims against Gelman Sciences. He suggested that since the company discharged most of the pollution under state permit, the contamination is the DNR’s fault.

“As the State is primarily at fault, the Court believes that the State would be much better off submitting a plan to eliminate (the pollution) rather than continuing extensive litigation,” Conlin wrote.

First the firm used holding lagoons to contain the water, on the assumption that dioxane would decay the way other organic solvents do. Then, at the suggestion of the DNR, it used spray irrigation, spraying the water into the air to evaporate the solvent and disperse it widely across the ground. Both practices had the knowledge and blessing of DNR officials.

The firm discontinued use of 1,4-dioxane in 1986 and a year later offered the state proposals for beginning a cleanup. Drinking water in the area would have been cleaned up to an acceptable level by now if the DNR had accepted plans, Charles Gelman said.

Despite the lack of formal approval of cleanup plans, the firm went ahead and began pumping tainted groundwater from the well of a nearby firm, Redskin Industries. Without treatment, the waste water was then injected down a deep well that deposited it a mile beneath the Earth’s surface. The practice was approved by the U.S. Environmental Protection Agency. About 7,500 pounds of the solvent have been recovered from the aquifer so far, Gelman said Friday. The firm also has in hand the machinery for a treatment process that would destroy the solvent.

Experiments have found that ultraviolet radiation like that from ordinary sun lamps will decay dioxane. Gelman says the technique would remove 90 percent of the contamination. “We have the UV treatment equipment, but the DNR has blocked our use of it,” he said.

Key DNR officials in the Emergency Response Division could not be reached for comment Friday, and the agency’s public affairs office referred media questions to the Attorney General’s Office.

Dewitt said Friday that Gelman’s declaration of victory is premature. “This is only one decision in this case,” he said. The state will continue to press for the firm to pay for cleanup, including possible legal appeals. “Clearly, Gelman needs to own up to their responsibility,” he said.

Gelman said that even though Conlin’s decision seems to place the burden of cleanup squarely on the state, the firm will do its share - up to a point.

“Our responsibility is to clean it to safe drinking water standards - period,” he said. “Beyond that, it becomes a political decision.”

Gelman said he considers 3 parts per million a safety threshold for dioxane in drinking water. The state, up until a year ago, had only one standard: remove every last molecule. New cleanup rules that allow some consideration of relative risks and cleanup expense are a direct result of the legal battle between the state and Gelman Sciences.

Now the parties will have to present evidence to Conlin about the unauthorized releases of dioxane, even though the judge’s ruling suggests that they are neither a major source of pollution nor a threat to the public health. Once it can be determined how much of the problem was outside of the DNR’s permits, Conlin might rule on what percentage of cleanup costs are the firm’s responsibility.

“It creates a scenario for more reasonable discussions,” Gelman said. Dewitt confirmed that negotiations are continuing between the state and the firm.

Janette Scarbrough, a resident of the Westover Hills subdivision northeast of Gelman Sciences, said Friday that her first reaction to the Conlin ruling was, “Who’s gonna clean it up then?”

The Scarbroughs sued the firm for damaging her property value and making her fear for her health. John Scarbrough said he “not real comfortable with it because of the state’s record on other cleanups.”

The Scarbroughs also wonder how Conlin’s ruling will affect their appeal of a $119,000 jury award. “In our case, Gelman had already admitted responsibility (for the pollution),” John Scarbrough said.